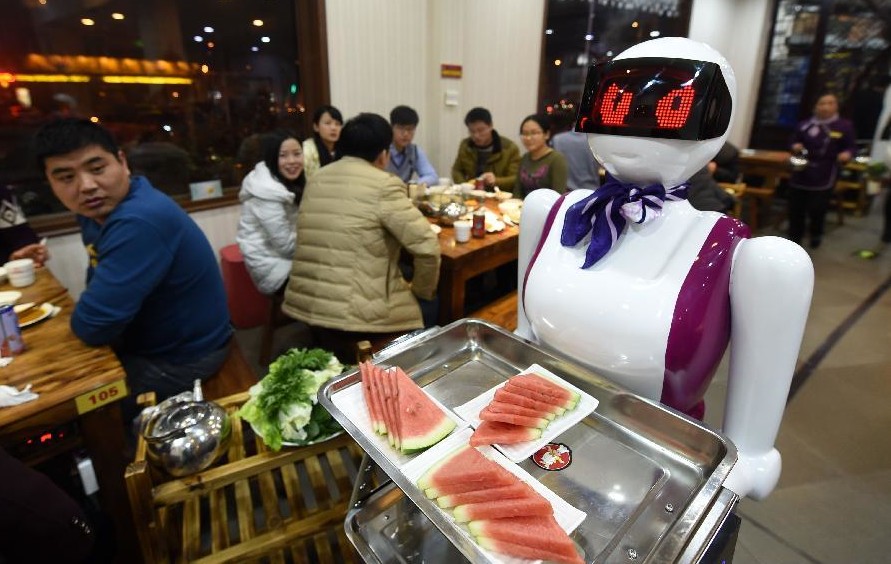 The robots are coming (and going) when it comes to positions in the service industry after restaurants in China had to fire their mechanical waiters for not being able to perform simple tasks like pouring a glass of water.

Although experts have warned that robots will take over most jobs within 30 years, and the restaurant industry has made more use of mechanical means, waiting tables still remains a profession reserved for humans.

In Guangzhou, China, at least two restaurants have discontinued using robots as waiters after numerous complaints from both staff and customers.

“The robots weren’t able to carry soup or other food steady and they would frequently break down. The boss has decided never to use them again,” said one Chinese restaurant employee.

Apparently, the robots weren’t very good at human interaction either. “Their skills are somewhat limited,” said one restaurant waiter, adding, “they can’t take orders or pour hot water for customers.”

‘McRobots’ divide and conquer while bosses benefit from squabble

Carl’s Jr. and Hardee’s CEO Andy Puzder is extremely interested in the idea replacing humans with robots for monetary and efficiency means, but this creates a very ugly situation that gets to the heart of the real issue.

The real issue is that workers are humans and humans deserve a living wage in our current money-market economy. What’s happening now is that workers are fighting over a difference of a few dollars with many negative attitudes about who deserves what.

For example, fast food workers want a somewhat reasonable, living wage of $15/hr. A plumber thinks he should earn more than a “burger flipper,” and therefore asks for $20. Engineers want more, and the intangible hierarchy continues over who’s job is more important.

None of this is relevant to the real problem at hand, and that is all workers are getting screwed while CEOs are making record profits.

According to Puzder, the problem is politics. “This is the problem with Bernie Sanders, and Hillary Clinton, and progressives who push very hard to raise the minimum wage,” said Puzder. “Does it really help if Sally makes $3 more an hour if Suzie has no job?”

While Puzder’s employees struggle to make ends meet, they have to rely more on government funded subsidies, and this is where the system begins to unravel on its way to a more consolidated form of government. With more people depending on the government, how will the government respond?

Puzder’s attitude goes to show how out of touch CEOs of large corporations are with the actual well-being of their employees.

With the only incentive of corporations being the bottom-line, the employees suffer. CEOs of America’s top 25 restaurant chains take home on average 721 times more money than their minimum-wage earning employees.

“It’s a picture of uncontrolled greed,” said Economic Policy Institute (EPI) vice president Ross Eisenbrey. “How can it be that the CEOs are making more in half a day than many of their workers are making in an entire year—and yet they can’t afford to raise the pay of those workers?”

If machines are to replace humans in the workforce, which has been an issue since the Industrial Revolution, then we need to take a closer work at capitalism in general. Who benefits?

Theoretically, if all workers are to be robots, then what are the non-robots — you and I? How do we make a living? It is statistically and logically impossible for humans to make money if they do not have jobs because they were replaced by robots. So what happens to us?

It’s anyone’s guess, but consolidation seems to be one solution. Consolidation of wealth, resources, and power would be distributed and sold as socialism, but in reality it would be a one-world totalitarian socialist government. A human labor force would be obsolete and those with the power would make the rules for the rest of us as we would be powerless, save our voices.

However, on the brighter side, the freedom from labor could free up more time for us to evolve as individuals and as a society. It could be an opportunity to create more Rembrandts, Da Vincis, and Platos that could further perpetuate the human condition towards a brighter future.

But I doubt it.

Corporations are greedy, CEOs are blinded by profit, and the business of robots is too ludicrous that only a major paradigm shift in consciousness will stop this runaway train.

As Autodesk CEO Carl Bass put it, “The factory of the future will have only two employees: a man and a dog. The man will be there to feed the dog. The dog will be there to keep the man from touching the equipment.”