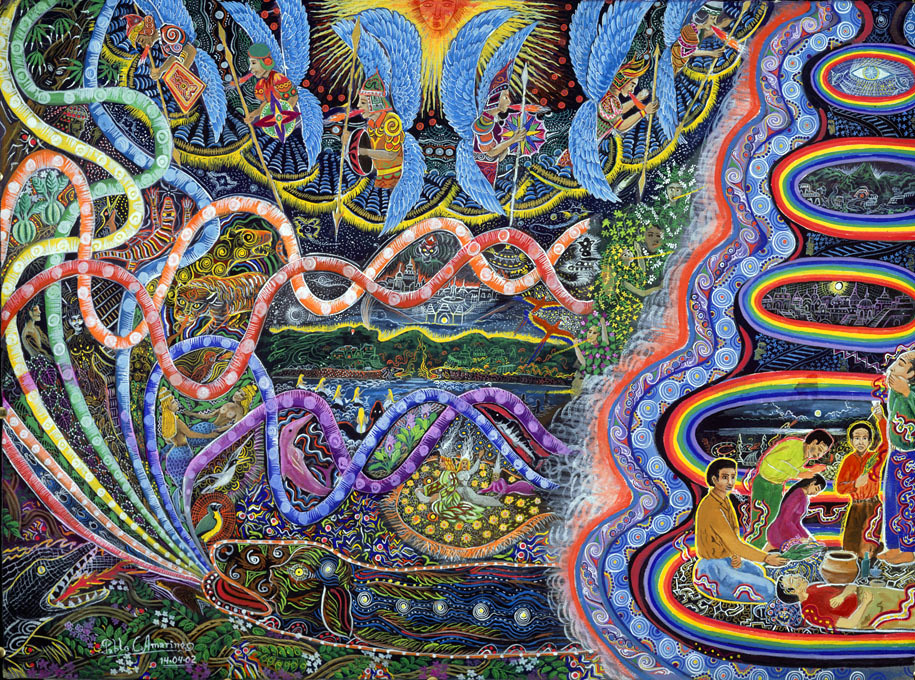 With the successful retrieval of digital data encoded in snippets of synthetic DNA sequences, the University of Washington (UW) has backed up ancient teachings from shamans that speak of a hidden intelligence lurking in all living things.

Ever since Francis Crick and James Watson discovered the famous double-helix form of DNA in the 1950s, most of the sequence has remained a mystery, which led scientists to dub this unexplained phenomena “junk DNA.”

However, Peruvian shamans in the Amazon basin, and likewise other cultures throughout the ancient world, have claimed knowledge of its form throughout the ages. The most universal representation is the coiled serpent — long used as a symbol of medicine since Sumerian times.

From a vase in Lagash, Mesopotamia

Anthropologist and author of “The Cosmic Serpent, DNA and the Origins of Knowledge,” Jeremy Narby, claims that shamans or “medicine men” access an intelligence through the drinking of the entheogenic brew Ayahuasca that allows them to communicate with living DNA. They call it “the television of the forest.”

According to Narby, “Both shamans and molecular biologists agree that there is a hidden unity under the surface of life’s diversity; both associate this unity with the double helix shape (or two entwined serpents, a twisted ladder, a spiral staircase, two vines wrapped around each other); both consider that one must deal with this level of reality in order to heal. One can fill a book with correspondences between shamanism and molecular biology.”

Narby, who spent time among indigenous peoples of the rain forest, went on to explain that DNA itself is a living language, and since we are made of DNA, we ourselves are made of language.

Meanwhile, at the University of Washington, researchers have been able to tap into the language of DNA in order to create “zip codes” or areas of reference in the sequences in which they can store and successfully retrieve large quantities of information in a microscopic space at will.

According to the University of Washington’s study, “the team successfully encoded digital data from four image files into the nucleotide sequences of synthetic DNA snippets […] they were also able to reverse that process — retrieving the correct sequences from a larger pool of DNA and reconstructing the images without losing a single byte of information.”

“Life has produced this fantastic molecule called DNA that efficiently stores all kinds of information about your genes and how a living system works — it’s very, very compact and very durable,” said Luis Ceze, UW associate professor of computer science and engineering.

Is there really such thing as ‘junk DNA?’

If we can store enormous chunks of data in a small section of DNA, what are the chances that we are not the first to discover this? Is it really feasible that 3.2 billion letters of code, roughly 97% of our DNA, is to be considered junk? Perhaps not. Whether by intelligent design, mutation, or a combination both, most of our understanding of human origins and DNA are shrouded in mystery and controversy.

There are those such as Richard Dawkins who believe that we are a simply a random product of billions of years of accidental evolution while the more religiously-inclined believe we were created in a single day by God. Yet there are still others, such as the late researcher Zecharia Sitchin, who claim that it is a bit of both.

In his massive undertaking, “The Earth Chronicles,” Sitchin laid out his theory that some 200,000 years ago, early hominids were visited by an alien species called the Annunnaki (those who from heaven to earth came), and that these creatures spliced their DNA with that of early man in a laboratory, thus creating a hybrid race of workers from which all humans descend.

According to Sitchin, the Annunaki manipulated our DNA in such a way that did not allow us higher levels of consciousness, nor did they bestow upon us the gift of long life that our alleged “creators” possessed, and the quest for immortality is one of the most ubiquitous in all of mankind’s history.

A lot of what Sitchin documented has been fiercely denied, debunked, or outright ignored — he was also an alleged 33rd degree Freemason, which also gives the sense of a hidden agenda of disinformation on his part, but it does make for a compelling read.

However, ever since the Human Genome Project began in 2000, scientists have been scampering to understand the way our genome works and how to account for so-called junk DNA. Researchers of the international Encode Project found that laying within this hidden code they have identified “more than 10,000 new ‘genes’ that code for components that control how the more familiar protein-coding genes work.”

As more and more research begins to chip away at the idea of junk DNA, more and more questions arise. Where did this DNA come from? What is its purpose? How can we access it?

With the University of Washington’s incredible discovery at the storage capacity of DNA, anything imaginable could be lurking just beneath the surface — within our very skin, coarsing through our veins, and on the very grasses that we trod. The more scientific the discovery, the more poetic it becomes. After all, what is the grass? Is it the same as you or I. Are we not made of the same intelligence? Is DNA, like the grass and like ourselves, not a form of hieroglyph for us to decipher?

A child said, What is the grass? fetching it to me with full
hands;
How could I answer the child?. . . .I do not know what it
is any more than he.

I guess it must be the flag of my disposition, out of hopeful
green stuff woven.

Or I guess it is the handkerchief of the Lord,
A scented gift and remembrancer designedly dropped,
Bearing the owner’s name someway in the corners, that we
may see and remark, and say Whose?

Or I guess the grass is itself a child. . . .the produced babe
of the vegetation.

Or I guess it is a uniform hieroglyphic,
And it means, Sprouting alike in broad zones and narrow
zones,
Growing among black folks as among white,
Kanuck, Tuckahoe, Congressman, Cuff, I give them the
same, I receive them the same.

And now it seems to me the beautiful uncut hair of graves.