By October 2011 seven billion people will be living on the planet. To mark this feat the United Nations has turned to crowdsourcing to launch an international competition to find the designer of its “7 Billion Actions” campaign logo. 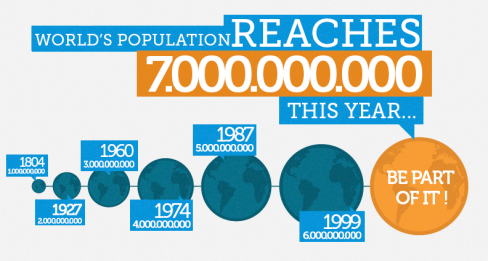 Over the next week the United Nations Population Fund (UNFPA) is challenging designers, artists and creatives to develop a logo to front the worldwide campaign. The winner will receive $1,000 (~€685, ~£610) and a signed certificate by the UNFPA Executive Director, Babatunde Osotimehin.

According to the UN Crowdsourcing is the perfect analogue for showing the connections between each person on the planet. Crowdsourcing is the process of using the web, and usually social media, to source information, services or objects from multiple people at the same time. Flash Mobs are a common example of crowdsourcing, however agencies such as the blur Group and crowdSPRING use crowdsourcing to connect business professionals with creative individuals.

“The world’s population will top the seven billion mark in October. This is a unique moment in human history, as it is the first time most of the world’s population can participate in a global milestone directly and in real-time. Realizing this unique opportunity, the United Nations Population Fund (UNFPA) has enlisted a diverse group of corporations, organizations, and individuals to help lead 7 Billion Actions. This global initiative will showcase the people behind the number using online, mobile, and offline actions and operate as an inclusive, open-source endeavor. “

The aim of the campaign is to highlight the opportunities seven billion people offer the world as well as the immense strain the it places on the earth’s natural resources; already 5% of the world’s population consumes 23% of its energy, while 40% lack access to basic sanitation.

The company specialises in connecting copywriters, logo designers, web designers, graphic designers, and industrial designers with companies and start-ups that are looking to source talent not immediately available to them. crowdSPRING has an impressive client base which includes Amazon, the U.S Department of the Interior and Starbucks.

“We are confident that crowdSPRING’s international design community will bring the campaign to life by designing a visionary logo that emphasizes the need for all of us to act now by making a difference in other people’s lives. ”

Competition
The competition is now open and running to June 19. To see the entries, visit the crowdSPRING website. More information on the 7 Billion Actions campaign can be seen on the official UN website.

For more on the 7 Billion Actions Campaign have a look at the National Geographic’s video, which went viral in January.