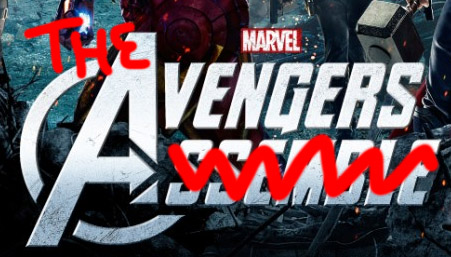 There’s a lot of exciting-looking movies coming up this year, but the two that are filling most of my brain’s anticipation-slots are The Avengers and Dredd. The latter I hope to cover in more detail in the future, closer to its September release date, but the former is only a few weeks away now. And a further week on top of that if you’re in America because – nah nah na-na nah! – we’re getting it before you are! Bwahahahahaaaa! Consider that payback for making us wait seven months to get Star Wars in 1977! 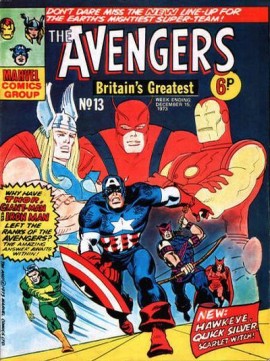 Anyway… The Avengers comic-book was launched in September 1963. It brought together a bunch of already-established characters: Thor, Iron Man, The Wasp, The Hulk and Ant-Man. This wasn’t the first time Marvel characters from different titles encountered each other (in March of that year the Fantastic Four battled The Hulk and declined to give Spider-Man a job), but – to the best of my knowledge and as far as I can be bothered to research – it was the first team-up that lasted for more than one issue.

But in 1963 I wasn’t aware of the launch of The Avengers, partly because I live in Ireland where, at the time, US comics were as rare as indigenous reptiles, but mostly because I hadn’t yet been born.

Luckily, in 1972 a UK branch of Marvel was established, and British comics were regularly imported into Ireland. The first issue of the Marvel UK weekly reprint of The Avengers has a cover date of September 22nd 1973. I didn’t get that first issue because my pocket money only afforded me one comic per week and I was already committed to Fleetway’s title Lion. But that commitment didn’t last, because lengthy superhero epics were more exciting to me than Lion’s three-page stories about WWII or highway patrol cops. My first issue of The Avengers was #13, published in December 1973. I was – hold on a second while I work this out – um, let’s see… born in March 1966, so in December ’73 I was… a kid.

I was already familiar with a bunch of Marvel characters from the other Marvel UK comics (The Mighty World of Marvel and Spider-Man Comics Weekly – each one reprinted chunks of assorted Marvel US titles) – but The Avengers was the first one that really grabbed me. Issue #13 featured the classic tale “The Old Order Changeth,” the one in which Hawkeye, The Scarlet Witch and Quicksilver joined the team. It also featured Captain America, and, as departing members, Iron Man, Giant-Man, The Wasp and Thor. Now, that’s a lot of cool for one issue!

(“The Old Order Changeth” was in issue #16 of the original US comic: I’m not sure, but I suspect that the earliest UK reprints either skipped a couple of stories or ran more than one per issue, because Captain America appears on the cover of issue #1 of the reprint, and in the US he didn’t show up until issue #4.)

I adored The Avengers, mostly because Hawkeye was involved. I had a big thing for archery – I loved Robin Hood and Tarzan – and that made Hawkeye the coolest character imaginable (DC’s Green Arrow predated Hawkeye by twenty-three years, but DC never produced UK reprints so I didn’t even know he existed). Hawkeye was brash and arrogant, a former criminal who forced his way into the Avengers’ mansion because he wanted to change his ways and prove that he could be a good guy. That alone was enough to endear him to me, for I, too, was a former criminal: I had once stolen an extra slice of my sister’s birthday cake. Hawkeye wasn’t all po-faced and righteous like Captain America: he used words like “gotta” and “nothin’” and he occasionally lost his temper. After a few years, Hawkeye temporarily gave up his bow and used Hank Pym’s Giant-Man serum to become Goliath. That made him double-cool!

I was obsessed with the title, even to the point of cutting out the characters from the shiny, coloured covers and sticking them on my bedroom walls, thereby brightening up my room and ruining my comics at the same time – which is one in the eye for all those who claim that men can’t multi-task. I used to daydream of fighting alongside The Avengers as soon as my own super-powers kicked in (could still happen, you know).

Over the years, The Avengers’ line-up has changed a lot, and there have been spin-off titles like West Coast Avengers, Great Lakes Avengers, New Avengers, Dark Avengers, Young Avengers, Bright Avengers, Middle-aged Avengers and Mutant Dinosaur Avengers from Mars (OK, so some of those I’ve just made up, but if DC had owned the characters then I’m pretty sure that at one point we’d have had Avengers’ Pets).

Since the launch of their first title The Avengers have dominated the Marvel universe, with only The X-Men and Spider-Man being more influential (Spidey was even a member of The Avengers for a while in the early 1990s, a fact that was apparently forgotten by everyone when he was invited to join The New Avengers in 2005), and the relaunch / reboot as The Ultimates in 2002 is widely regarded by me as one of the finest superhero comics in recent years.

Now, putting together a team of established characters in a new comic-book was a risk for Marvel in 1963, but that’s nothing compared to doing the same thing in a movie… Comic-books cost a few thousand dollars to launch. The upcoming Avengers movie is estimated to have a budget of 220 million dollars… Why, that’s more than the average novelist earns in a month!

It’s a huge gamble, but I reckon it’ll pay off. The trailers and clips thus far released look amazing, and with Joss Whedon at the helm it’s in very good hands. Yes, I know that the only other movie Mr Whedon directed – Serenity, in 2005 – didn’t do huge box-office, but it’s an absolutely excellent film and I have it on very good authority that anyone who doesn’t agree with me is wrong.

However – and this might be a controversial viewpoint for some – I reckon that the anticipated success of The Avengers movie is all down to one man: Robert Downey Jr. Casting him as Tony Stark in Iron Man was a stroke of genius. He suits the character so well that it’s impossible to imagine anyone else playing the role. He’s able to portray the perfect level of arrogance, humour and genius that the character requires. Iron Man’s success led to The Incredible Hulk, then Iron Man 2, Thor, and, most recently, Captain America. All great movies. (I do have a very soft spot for movies based on superhero comics: even when they’re bad, they’re still pretty good, except for Batman and Robin, which is so poor that I keep finding myself thinking, “Nah, there’s no way it can be as bad as I remember. I’ll watch it again. Oh. I was wrong. It is that bad.”)

I’ve been waiting for an Avengers movie for almost forty years, so as you might expect I’ll be there on opening night, awkwardly wearing my 3D glasses over my actual glasses (how come no one has invented prescription 3D glasses?), fortified with my carbonated beverage and my banana sandwiches (I always bring banana sandwiches to the movies because they’re tasty, nutritious, filling and – most important of all – can be eaten in silence: there aren’t many things more annoying than one’s fellow cinema-goers eating crunchy food or unwrapping sweets that come encased in very crinkly plastic), and hoping like crazy that Mr Whedon doesn’t let me down. I’m sure he won’t. There’s a huge amount of talent in front of and behind the camera. It’ll be cool.

I do have two very minor sticking points with the movie, though: first, Doctor Banner / The Hulk. He’s a guy who turns into a giant green monster. I have no problem with that: we’re expected to suspend our disbelief for movies of this ilk. That’s cool. But somehow I find it easier to believe that Banner can turn into the Hulk than that Edward Norton has turned into Mark Ruffalo. Don’t get me wrong: I like Mr Ruffalo a lot. He is a very fine actor and I’ve yet to see him give anything other than an endearing, engaging performance. But he’s not Mr Norton, who played the role in The Incredible Hulk (a vastly underrated movie in my opinion) and who is one of my all-time favourite actors. So I’m a little wary about that one.

My second minor sticking point is the title. Over here, it’s officially called Avengers Assemble, presumably to distance it from the classic British TV series that spawned a not-very-good movie in 1998. Seriously? That’s why we’re getting a lame title? Because people might go to see the movie without realising that instead of Steed and Mrs Peel it features American superheroes? Do the marketing people really believe that a significant number of moviegoers will attend their flick without viewing the trailers or seeing the posters? Please, that’s just crazy!

The Avengers NOT Avengers Assemble

I herby urge all Irish and British fans to always refer to the movie by its proper name! Let us forever shun the lame title. When you’re booking your tickets, tell the cinema folks that you want to see The Avengers. If they attempt to correct you – “You mean, Avengers Assemble?” – then treat them with heavy-hearted sigh of disappointment and a look of withering scorn. Shame them unto the fifth generation or something.

I was actually so upset about the new title that I considered flying to America just so that I could watch the movie as it was originally intended. But I realised that then I’d have to wait that extra week and, y’know, I’m not quite that crazy. Not yet.