Euro 2012, Google, the Olympics, and the boys in green

Ireland might have suffered a terrible defeat to Croatia in their opening Euro 2012 match but the Green Army, both in Poland and Ireland, has remained undeterred in their support and passion.

According to data from Google, users in Ireland have conducted the third greatest number of searches for terms related to Euro 2012 – third only to Nepal and the Championships’ co-host, Poland.

Google says that over the past three months users in Ireland have not only been searching for terms such as ‘euro 2012’, ‘Ireland euro 2012’ and ‘euro 2012 fixtures,’ but have also been researching ways to support the boys in green. The search company says searches for terms such as ‘flags’, ‘decorations’ and ‘bunting’ have become increasingly popular.

That said, those not searching for decorations have been busy finding ways to get to Poland and Ukraine. Google reports that Wizz Air, which operates flights direct between Ireland and Poland, has become a more common search term in Ireland, while flights to Berlin and searches for budget operator Ryanair have also increased.

Data from Google Trends reports that the interest in Euro 2012 isn’t just being fuelled by the Irish but by the country’s large Polish population. The vast majority of searches for “euro 2012” have been in Polish – now the second most spoken language in Ireland, after English.

Irish searchers are especially interested in “euro 2012 fantasy football“, which has seen a 700% increase in popularity on the search engine. The Irish are also interested in seeing how their nearest neighbour in the competition performs, with searches for England’s fixtures also increasing in popularity.

Meanwhile, with the Olympics only a number of weeks away Irish users have also been active in researching London 2012. The increase in popularity for Olympic search terms seems to have been sparked by the brief tour of the Olympic torch through Dublin in early June. 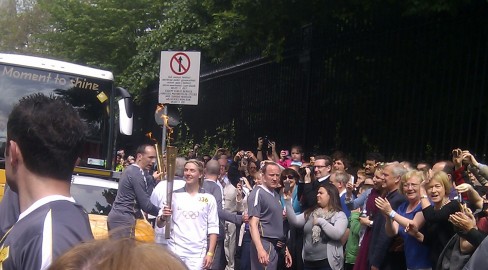 “Olympic torch” became the highest sports-related search term from Ireland, eclipsing searches for “euro 2012” in June. Globally: after London, Greece, Australia (which had its own Olympic news lately) the Irish have been the most active searchers for Olympic news.