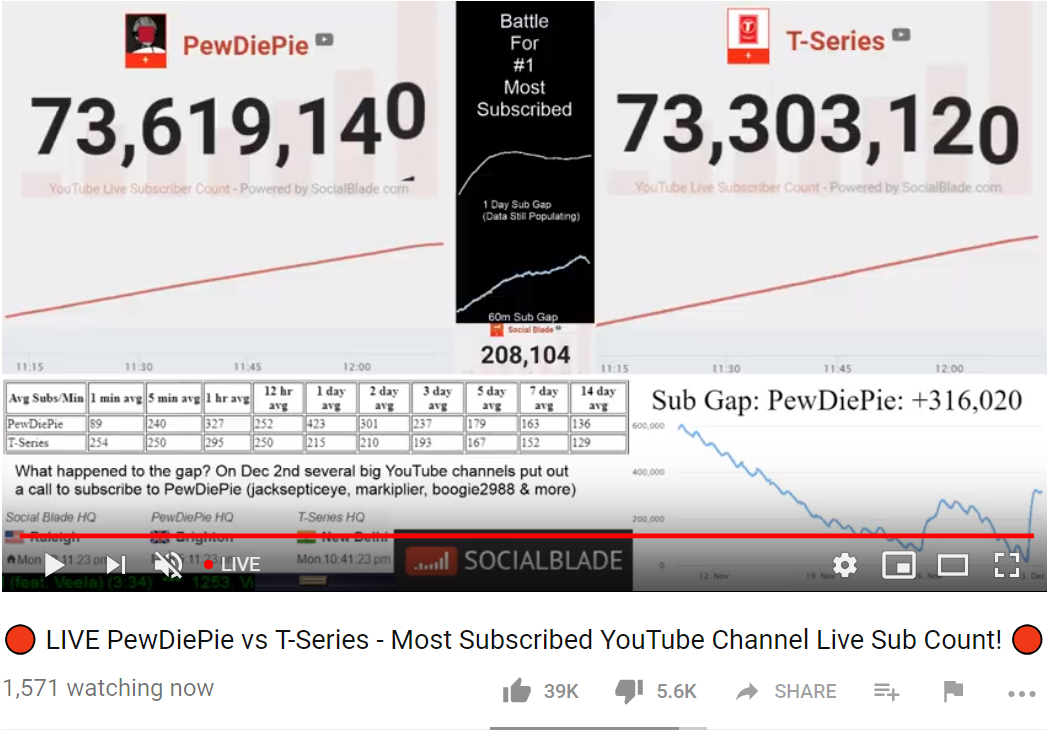 Mesmerizing is watching the race between the Swedish YouTuber Felix Arvid Ulf Kjellberg, known as PewDiePie, and the Bollywood content creator, T-Series, for the most subscribers on YouTube. The stakes are high for both of the contenders, but higher for PewDiePie, who, despite garnering over 73.5 million subscribers, faces what looks to be an inevitable dethronement as the most-subscribed-to-YouTube-content-creator.

On the YouTube channel for Social Blade, an internet analytics company, there is a live stream of the count showing him slightly ahead of T-Series, which has over 73.2 million subscribers, both of them gaining subscribers at a steady clip. The implication of this contest, which will conclude anytime between December 14th and January 1st, is more than just bragging rights. For T-Series to surpass PewDiePie in subscribers would indicate a seismic shift of internet influence being concentrated in the U.S. and Europe.

According to a demographic report published by YouTube, 80 percent of its users already come from outside of the U.S. And as the internet penetration rate (IGR) increases in developing countries, this gap of non-U.S. or European users will only widen. When T-Series was founded over 35 years ago by Gulshan Kumar, the population of India was 731 million people. Now, with over 1.3 billion people, India boasts nearly 18 percent of the world’s population, and T-Series is the largest record label in the country.

Scroll down the T-Series channel and you’ll find over twelve thousand uploads of highly produced movie clips and music videos that you likely have never heard of if you aren’t familiar with Bollywood culture. The most viewed video on the channel, “LAHORE,” has 625 millions views and is a music video produced by Bhushan Kumar, the chairman of T-Series and the younger brother of T-Series founder.

Tragically, the older brother never got to see the rampant success of his own creation—he was murdered in 1997 by a Mumbai mafia syndicate called D-Company. It took thirteen years after his death for the company, under the leadership of Bhushan, to start uploading content to YouTube, and since then, it has matched India’s rampant growth as an internet power house.

But if there were a match for nearly 18 percent of the world’s population, it would be the 29-year-old PewDiePie, who has maintained the largest subscribed-to channel for five years. As soon as his title was challenged in early September, he leveraged his most coveted asset—influence—in the form of 20 year-old American vlogger Jimmy “Mr Beast” Donaldson. Donaldson, known as YouTube’s biggest philanthropist, has over 11.4 million subscribers and a grand total of 1.3 billion views.

Despite the match-up, it is worth noting that PewDiePie is a solo creator and T-Series a full-fledged company, a representative from Social Blade told The Sociable over the phone. Nevertheless, the competition is stiff and at times reminiscent of a political campaign—lover of controversy and publicity and PewDiePie, Mr. Beast spent over a $1 million on billboard advertisements for PewDiePie, one taking up real estate in Times Square-–and other times, a boxing match—PewDiePie created a diss-track called “B*tch Lasgana” that has over 50 million views. T-Series, on the other hand, has simply “done what it has always done,” which is upload music video content that its audience is interested in.

LinkedIn jumps on ‘Stories’ trend with new feature for students