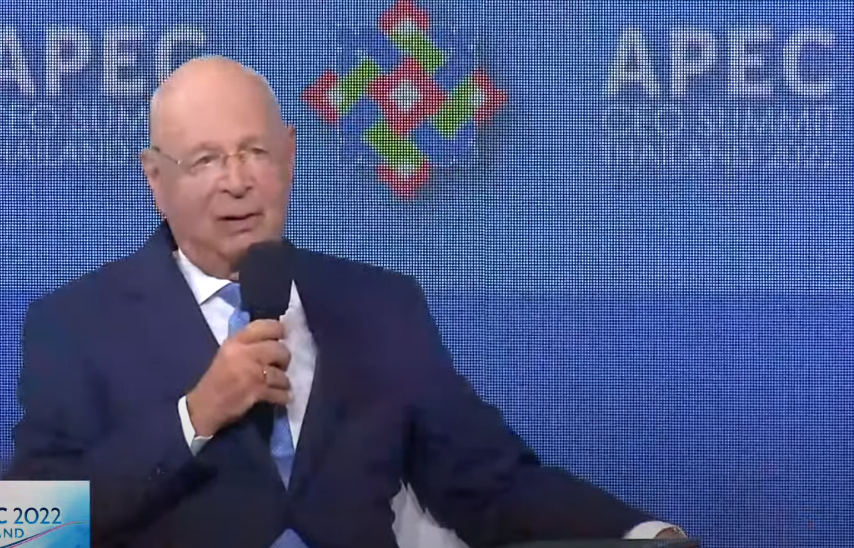 WEF founder Klaus Schwab calls on business leaders at APEC 2022 to “embrace the fourth industrial revolution” in order to be winners of the global economic restructuring currently taking place.

A global economic restructuring is one of the key elements of the unelected globalists’ great reset agenda, along with a reshaping of society — both driven by the power of the so-called fourth industrial revolution.

“There are four different dimensions you have to embrace — the first one of course is to embrace the fourth industrial revolution” — Klaus Schwab, WEF Founder, APEC 2022

Speaking at the Asia-Pacific Economic Cooperation (APEC) CEO Summit 2022 in Bangkok, Thailand last week, Schwab said that the global economic restructuring would lead to social tensions in many countries.

In order for business leaders to come out as winners and not losers following the economic restructuring, Schwab told the APEC crowd that they must first and foremost “embrace the fourth industrial revolution” — a technological ecosystem that, in his words, will lead to the “fusion of our physical, our digital, and our biological identities.”

“This economic restructuring will lead, in many countries, to quite some social tensions” — Klaus Schwab, WEF Founder, APEC 2022

“When you are a company, and you have restructuring costs, you write them off in your balance sheet, and of course the shareholders will suffer,” said Schwab at APEC 2022.

“But if you look at the global economy, the effect will be a reduction of purchasing power.

“That’s the reason why this economic restructuring will lead, in many countries, to quite some social tensions,” he added.

“If you embrace the fourth industrial revolution, you will be at the forefront” — Klaus Schwab, WEF Founder, APEC 2022

For business leaders, Schwab said that “the cards are redistributed” and that by the end of this transformation, there will be “winners and losers.”

In order to be a winner in the business community, Schwab said “there are four different dimensions you have to embrace.”

“The first one of course is to embrace the fourth industrial revolution.

“I have written, five years ago, a book on the fourth industrial revolution, and I coined maybe this expression.

“This revolution is different from the three previous ones.

“It’s a scope! It’s not just one technology; it’s multiple technologies reinforcing each another [sic].

“It’s speed; it’s exponential, and it is particularly also the fact that the winner takes it all.”

Schwab added that “If you embrace the fourth industrial revolution, it means to be at the forefront.

“You cannot lag behind anymore.”

“The final priority of a great reset agenda is to harness the innovations of the fourth industrial revolution” — Klaus Schwab, WEF Founder, 2020

In addition to the fourth industrial revolution, the unelected globalist said that business leaders must also embrace:

Schwab’s remarks at APEC mimic those he gave at the Business 20 (B20) Summit, a business precursor to the Group of Twenty (G20) Summit in Bali, Indonesia last week where he declared, “What we have to confront is a deep systemic and structural restructuring of our world, and the world will look differently after we have gone through this transition process.”

“In the fourth industrial revolution the winners will take it all, so if you are a first mover, you are the winners” — Klaus Schwab, WEF Founder, B20 Summit 2022

“To achieve a better outcome, the world must act jointly and swiftly to revamp all aspects of our societies and economies, from education to social contracts and working conditions […] In short, we need a ‘great reset’ of capitalism” — Klaus Schwab, WEF Founder, 2020

As TruthTalk UK editor Sikh for Truth rightly pointed out on November 15, the current economic restructuring that is leading to “social tensions” is all part of the unelected globalists’ “long and beloved great reset project.”

When Schwab declared, “We need a great reset,” on June 3, 2020, he said that the world must “revamp all aspects of our societies and economies.”

Now we are seeing that restructuring being played out in real-time.

Schwab also wrote back in June 2020, that “the final priority of a great reset agenda is to harness the innovations of the fourth industrial revolution.”

Now, the unelected globalist is going around the world telling business leaders that they must “embrace the fourth industrial revolution” in order to become the new champions of the post-great reset world.