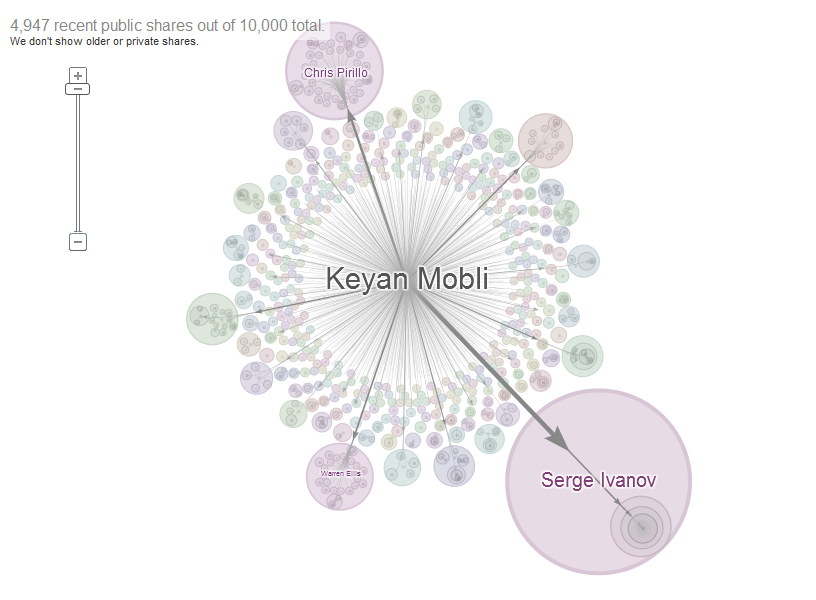 Soon after Google announced Google Ripples, Google+’s analytics system, Google+ user Keyan Mobli set his followers and the public a challenge; to create the “most interesting graph” by re-sharing his post. 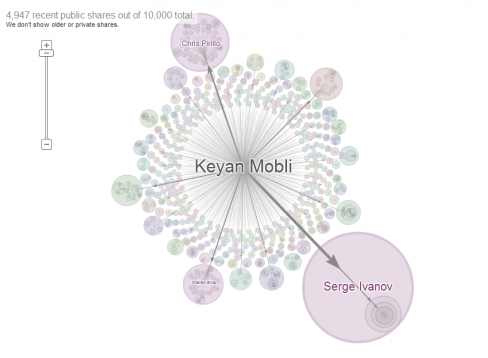 In just over 24 hours Mobli’s post has been re-shared over 10,000 times, although only the 4,947 public re-shares (at the time of writing) are shown on the Google Ripples graph.
So, how did this start? Keyan Mobli, a student of Neurobiology at the University of Texas in Austin, posted this on this Google+ account on Thursday;

Reshare this post so we can test the new Google+ Ripples! The more reshares, the more interesting the graph.

So please, everyone reshare.

Mobli’s experiment has indeed created an interesting graph but it has also given us an insight into the Google+ ecosystem. Google Ripple’s analytics says the post has been re-shared 200 times an hour with an average chain length of 3.38 people.  No chain has gone over nine people.

Some 2,175 people shared the post directly from Mobli, Felicia Day’s followers re-shared her share of this post 752 times while Prillo, Ellis, and Pallenberg’s followers collectively re-shared their shares of Mobli’s post 333 times. Could this suggest that Google+ users will go to the source of a post before re-sharing?

Mobli’s post is interesting for other reasons – 94% of the re-shares have been in English with the next significant percent being European languages.  The Google Ripples’ timeline of re-shares suggests that Google+ takes more after Twitter than Facebook with posts having short periods to catch users’ attention before they disappear from the timeline.  It also appears that Google+ is largely an influencer-driven network – shares by celebrities created the largest spikes in re-shares.

Writing at 6pm today, Mobli described how the post took off,

I thought we had gone critical once +Chris Pirillo stepped in and reshared my post,but it was just starting. Soon after, we topped the “What’s hot” list. Apparently this list is not only on the side, but in the timelines of some people. This resulted in me getting some very angry emails from a couple of people about me “Infiltrating their timeline.”

When the post was beginning to die down, +Felicia Day stepped in and reshared, but you won’t see her clearly in the graph. This brings up my favorite part of it all. The path to her begins with me, goes through +Serge Ivanov, to +Anuj Ahooja, +Pearl Chen, and then finally to +Felicia Day where it starts it’s own microorganism. Zoom into that part of the graph to see it all.

I am also taking credit for the “What’s Hot” list being broken overnight.

Beyond the numbers, the post has created an interesting demonstration of the way users shared the post on Google’s social network.  One arm of the “Ripple Nipple” (as Chris Pirillo called it) shows +Serge Ivanov influenced +Anuj Ahooja, who was re-shared by +Pearl Chen, then by +Felicia Day and finally her followers.

How to use the web to scare yourself stupid this Halloween