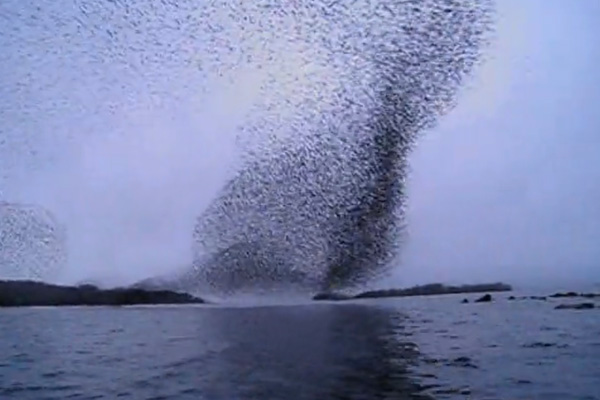 Two tourists canoeing down the River Shannon, Ireland have captured this stunning murmuration of starlings on video. A murmuration is a large swirling cloud-like formation consisting of thousands of starlings flying together.

The two girls, Sophie Windsor Clive and Liberty Smith, presumably British tourists came across the spectacle by chance while canoeing on Lough Derg, the last of the three largest lakes on the River Shannon. The video has already been viewed over one million times on Vimeo.

As Daniel Butler of The Telegraph explains, it’s all about safety in numbers. Each bird “strives to fly as close to its neighbours as possible, instantly copying any changes in speed or direction”. Small deviations by one bird are “magnified and distorted by those surrounding it, creating rippling, swirling patterns”.