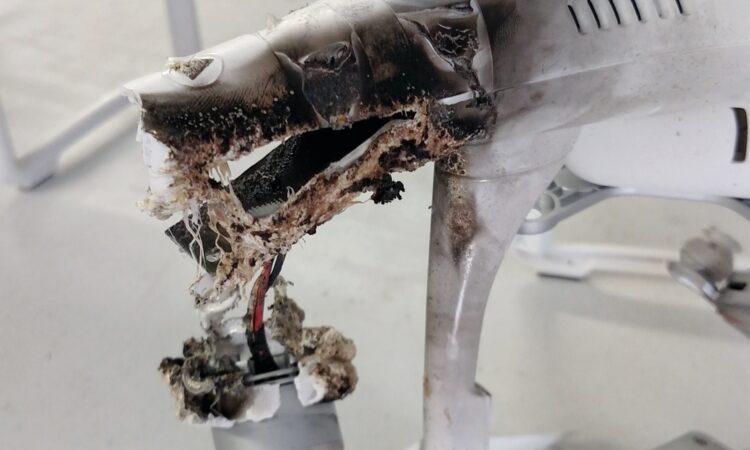 "Lasered Out of the Sky": A drone shot down by a MEHEL-equipped Stryker in April, 2017 at Fort Sill (US Army Photo)
6.25Kviews

The Pentagon’s research funding arm is prepping a five-year program to develop high energy laser sources for directed energy applications that are ideally suited to combat drone swarms, among other undisclosed military uses.

Already envisioning soldiers swarming with up to 250 drones simultaneously in urban combat, the Defense Advanced Research Projects Agency (DARPA) is now setting its eyes on how to counter drone swarm attacks and more with compact, scalable, and panelized High Energy Laser (HEL) sources.

Marines in Central Command train on the Compact Laser Weapon System (CLaWS), taking down an unmanned aerial vehicle mid-flight at an undisclosed location on January 21, 2021

According to the MELT program description published last week, “The proliferation of small, low-cost Unmanned Aircraft Systems (UAS) on the battlefield requires a layered defense that includes low-cost Directed Energy.

MELT aims to exploit technologies such as:

The goal of MELT is “to develop a mass-producible, low Size, Weight, and Power (SWaP), scalable laser source,” which, according to the program description, “will require the development of a new type of HEL source, as current HEL technologies are very complex, have high part counts, and require skilled labor to manufacture and assemble.”

As for additional use cases, DARPA says it has identified “a variety of other compelling Service LWS applications,” but doesn’t mention what those applications are specifically.

Apart from lasers being a drone-zapping and destroying technology, Futurism reported in 2018 that the US Army has been working on “a system in which a laser shot from the ground can power up a military drone mid-flight,” which according to New Scientist, would allow for a “laser-powered drone to fly indefinitely.”

The US Army has also been experimenting with lasers to detect all sorts of airborne particles from naturally-occurring dust and smoke to man-made chemical and biological agents.

“For defense against them [drone swarms], one of the things that I think will be most promising is directed energy in one form or another” — Dr. Michael Griffin, 2018

Back when Dr. Michael Griffin was the Pentagon’s Chief Technology Officer in 2018, he told the Center for Strategic and International Studies (CSIS) that directed energy and microwave weapons looked to be a promising defense against drone swarms.

“One of the things we see emerging even today is the unmanned aerial vehicle, unmanned ground vehicles, unmanned water vehicles,” Dr. Griffin said in late 2018.

“We often think about directed energy as large lasers […] but we also have high-powered microwaves, which can be very effective” — Dr. Michael Griffin, 2018

“For defense against them [drone swarms], one of the things that I think will be most promising is directed energy in one form or another. We often think about directed energy as large lasers, and I’ve certainly been involved with some of that for decades, but we also have high-powered microwaves, which can be very effective,” he added.

“The counter-drone system, which has both commercial and military uses, can be used to stop, identify, redirect, land or take total control of a target unmanned aerial vehicle” — DoJ Indictment, January, 2022

The following day on January 27, the US Department of Justice indicted four foreign individuals from the UK, Canada, UAE, and Iran of conspiring “to export an Industrial Microwave System (IMS) and counter-drone system from the United States to Iran.”

According to the indictment, “Potential military uses of the IMS (with some modification) include high-power microwave based directed-energy weapon systems.

“The counter-drone system, which has both commercial and military uses, can be used to stop, identify, redirect, land or take total control of a target unmanned aerial vehicle.”

“The goals and timelines of MELT are aggressive” — DARPA MELT Program

DARPA’s MELT program will be a 60-month undertaking, divided into three phases.

“A planned Government Team, consisting of John Hopkins University – Applied Physics Lab, the Office of Naval Research, Air Force Research Laboratory, and the US Army will execute in parallel to the performer(s) throughout the five-year program” — DARPA MELT Program, January, 2022

Phase 3: (Option 2 – 12 months) will focus on demonstrating the laser tiles operated in a panelized
configuration to show traceability to a scalable HEL source.

By the end of the 60-month program, “MELT seeks to demonstrate a 3×3 panelized array of laser tiles with excellent beam quality as a scalable high energy laser source.”

Additionally, “A planned Government Team, consisting of John Hopkins University – Applied Physics Lab, the Office of Naval Research, Air Force Research Laboratory, and the US Army will execute in parallel to the performer(s) throughout the five-year program,” according to the program description.