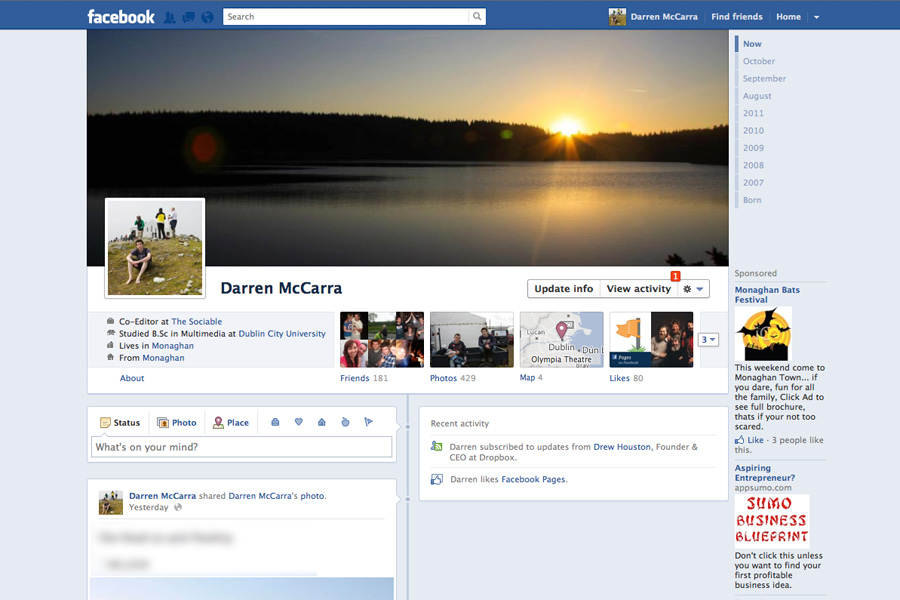 I've been using the new Facebook Timeline since day one - September 22nd
4.31Kviews

Speaking to The Next Web’s European Editor Martin Bryant at the Dublin Web Summit today, Ethan Beard, Director of Developer Marketing at Facebook, has confirmed that the roll-out of the new Timeline profile is now only “a matter of weeks” away.

For whatever reason the roll-out of Facebook Timeline has been delayed, be it the controversy over trademark infringement claims by Timelines.com, the suggestion that negative feedback may have caused Facebook to re-consider Timeline or that developer adoption has been slower than expected, Timeline’s introduction to Facebook’s 800 million or so users is imminent and will more than likely happen before the end of November.

Ethan described Facebook Timeline as a “very significant change” that would enable users to provide a “much fuller description of who they are” on Facebook when compared to the current “limited” profile page. Timeline gives users the “ability to curate and highlight what they think is important”. Facebook have been working on Timeline for the “better part of a year”.

Ethan also provided some commentary on Facebook’s vision of a mobile future. With 350 million people per month accessing Facebook on a mobile device, Facebook knows the importance of the mobile experience. Ethan describes the similarities between mobile devices and the Facebook platform. Like a mobile phone is a personal device but also social, so to is Facebook. Users feel possessive over their own Facebook profile and are inherently social on the network. For this reason “mobile and social go hand-in-hand”.

Facebook has recently released their iPad app but are “investing very heavily in HTML5”. They see HTML5 as a technology that can be “employed everywhere”, reducing the need for an ever-growing group of teams to work separately on translating Facebook to other platforms. HTML5 also gives Facebook the flexibility to push updates out quickly, allowing them to bypass the approval process in respective applications markets.

Towards the end of the short interview, Ethan left us with this comment – “Everything is going to be social at some point”.