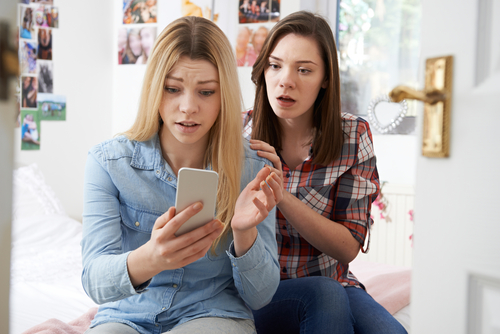 What was once said on the playground or under one’s breath at an annoying coworker has made a home in today’s technology- and it seems pretty comfortable there. This type of bullying with the aid of technology is called “cyberbullying.”

Cyberbullying has become so popular because of the anonymity technology allows. Individuals are able to create fake usernames and accounts, then say whatever they want to whomever they want with no apparent consequences. Not seeing the reaction of their victims in person prevents them from seeing the hurt they are causing, making them less empathetic.

Read More: Imprisoning trolls: the rise of hate crimes in the UK and the increasing measures to tackle them

Others who participate in social media may not instigate cyberbullying, but might participate by liking posts, commenting, or other such action that would encourage the bully. Jon Ronson describes this as an “internet mob mentality.”

This often happens when many individuals gang up against another person on social media in the comments section, or when individuals comment on posts or articles online, ridiculing or making fun of someone. The individual posts may not seem like much, but when hundreds of people are chiming-in in agreement, the person being chastised is very much a victim of cyberbullying.

Cyberbullying Happens to All Ages

Unfortunately, taunting and teasing doesn’t always stop when we grow up. Adults can be victims of cyberbullying just as easily as children and teens. Here are ten tips for adults who are being harassed online:

According to stopbullying.gov, there are many reasons that make cyberbullying more serious than playground taunting or rude comments said by people on the street.  These reasons are why cyberbullying is considered a crime in many states, with a conviction bringing a possible 18 months in prison, according to John Tumelty, a criminal defense lawyer.

The internet never forgets, regardless of whether it is true or kind. Cyberbullying can create a negative online reputation, influencing the opinions of others in regards to personal relationships, employment, and other such opportunities.

Those who participate in cyberbullying often do not recognize the permanency of what they are saying or the damage they are causing as a result of their actions.

Often the victims of cyberbullying feel isolated and alone. Those in their life may not be aware of the bullying, especially if it is via text or instant messaging. Victims may not share their experiences out of shame or guilt, further isolating themselves.

A peek inside the transhumanist agenda