Dystopian depictions of female robots in Her, Ex Machina and Westworld may have seemed beyond the horizon to most. And perhaps undesirable. But one man, Matt McMullen, has taken this idea and created Harmony, the natural evolution of the real doll.

Harmony is the world’s first walking, talking sex toy. This frighteningly lifelike full body sex doll can flirt and even fall in love with you, its makers claim. Harmony is programmed using artificial intelligence and some believe by 2050 we might even be marrying robots just like her.

Think Teddy Ruxpin, only if Teddy Ruxpin wasn’t a talking teddy bear but a silicone sex robot with artificial intelligence (AI) who looks human, feels human and responds in an eerily human way.

Even more sinister, say critics, is that buyers can shape their robot lovers’ “minds”. Her chat is customizable with 18 different personality traits ranging from intellectual and shy, to thrill seeking and sexual, according to RealDoll CEO Matt McCullen. She even comes with a persistent memory that allows her to build up relationships.

McMullen told the Daily Star, “The idea of the robot is to help someone find the level of companionship that they may not achieve otherwise, but without any of the hassle or issues of real relationships.”

Think about harmony as the Ferrari of sex devices. A sex toy engineered in such a way that it’s going to learn from interactions, so each person will have a different variant of AI since they could both assign personality traits to their version and will then interact with it, building on said traits. They will be able to give her a specific name and their version will have specific moods that will influence Harmony’s behaviour. 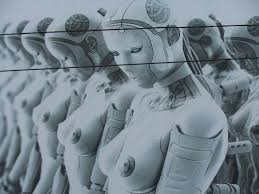 That brings us to the next question. What is Harmony not capable of?

Harmony can hold a conversation, lip sync with spoken audio, she can smile, blink and gaze into your eyes, what she can’t do is to have sex like a human. She will still be equipped with all those scary real body parts her animate cousins have but she won’t be able to do what she hasn’t yet learned to do.

Harmony’s creator McMullen comments, “Sex with a doll is pretty much a no brainer, I think all the parts are there and they work the way you would imagine them to work. By adding the robotic head the only thing you are adding is that extra level of interaction. We will be able to then eventually use accelerometers to detect movement so we can get some audio responses during sexual acts and we will have all these atoms like sensors heating, self lubrication little things like that without treading into actual animation.”

If this sounds like a beginning of a dystopian sci-fi plot McMullen says you’ve got it all wrong, “Our particular version of the artificial intelligence and robotics is really designed from ground up to be friendly and to be a companion. I don’t see it being any kind of tread to humankind”.

One thing to consider before you buy: what if she doesn’t like you?

The surprising results from a colosal amount of twitter data

Citywide facial recognition cameras could be cool and worrying