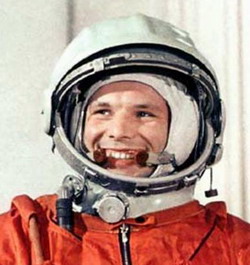 The film combines original audio and video recordings of the flight with HD footage taken from the International Space Station.  A new score was written epsessially for the piece by composer Philip Sheppard.

On board the Vostok 1 Yury Gagarin’s first orbit lasted just under two hours. Gagarin was given a hero’s welcome on his return, however he died in March 1968 aged 34, a year before NASA astronaut Neil Armstrong first set foot on the moon.

In a unique collaboration with the European Space Agency, and the Expedition 26/27 crew of the International Space Station, we have created a new film of what Gagarin first witnessed fifty years ago.

By matching the orbital path of the Space Station, as closely as possible, to that of Gagarin’s Vostok 1 spaceship and filming the same vistas of the Earth through the new giant cupola window, astronaut Paolo Nespoli, and documentary film maker Christopher Riley, have captured a new digital high definition view of the Earth below, half a century after Gagarin first witnessed it.

Weaving these new views together with historic, recordings of Gagarin from the time, (subtitled in Englsih) and an original score by composer Philip Sheppard, we have created a spellbinding film to share with people around the world on this historic anniversary.

As the Huffington Post reports this is also a first, of sorts, for YouTube. Google is in the process of establishing YouTube as a source for original quality content. This video also comes as the site begins to rollout live streaming video channels.

The film by FirstOrbit (@firstorbit) is accompanied by iPhone and Android apps.