HomeWebHow the Iraq war still isn’t over: The upcoming Battle for Mosul
Web

How the Iraq war still isn’t over: The upcoming Battle for Mosul 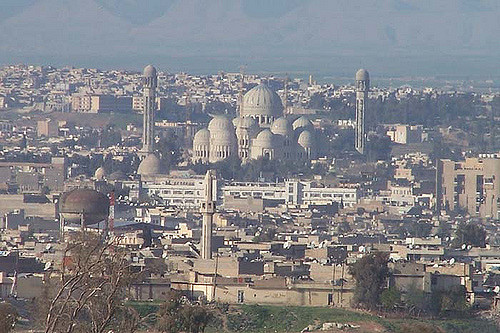 With over 100,000 civilians displaced in the fertile crescent, Iraqi security forces are preparing for a crucial battle in the city of Mosul with help from a US-led coalition, just before the fifth anniversary of the withdrawal of American troops and the “official end” to the Iraq war.

“As your commander in chief, and on behalf of a grateful nation, I’m proud to finally say these two words: Welcome home,” said Obama addressing the soldiers at Fort Bragg in 2011.

The fighting; however, is far from over five years on, and Iraq has not seen peace since 2003 with over 13 years of war.

Mosul, Iraq’s second largest city, is currently under control of the so-called Islamic State (IS, ISIS, ISIL) terror network. The Islamic State did not exist until the Iraq war was well underway, as the organization arose from the power vacuum created by the US-led coalition that bombarded the country and destroyed its infrastructure.

The tenants from hell

The Military Times reported today, “Iraq’s leaders have repeatedly promised that Mosul — which has been in the hands of IS militants for more than two years now — will be retaken this year, though U.S. officials have said that timeline is unrealistic.”

America’s presence before and after the Iraq war is like the tenant from hell that was never invited and never signed any lease. Congress was bypassed, the American people didn’t have a say, and the military completely trashed the place with no plan for fixing repairs.

Now that the cockroaches in the form of ISIS have come to nest, and their exterminator has to be paid for in American dollars and Iraqi lives.

The upcoming battle for Mosul

With the battle for Mosul just a few months away, “Iraqi security forces have started preliminary operations in Mosul, but the Iraqis are still mobilizing forces and slowly moving toward the city.”

In an interview with Rudaw, Khasraw Goran, member of the Kurdistan Democratic Party (KDP) leadership council warned of another power vacuum.

“The problem is not in liberation of Mosul, it is what happens after ISIS. This is a very important point. There should be an agreement between all parties before the battle starts, under the supervision of US, coalition and the UN in order to prevent tension and problems,” sad Goran.

No sooner than one military campaign begins that insurgency, civilian casualties, and the struggle for power arises.

“Indeed, the recent disturbances in Turkey, the repercussions of which may not end soon, confirm the dynamics of instability and change; more so as the international community stayed silent for too long as Syrian and Iraqi territories were being transformed into a mega-camp that attracts, gathers and trains radical Sunni groups as a prerequisite for the implementation and then justification of the new ‘plan’.”

The Iraq war may have been declared officially over by Obama, but the fighting continues.