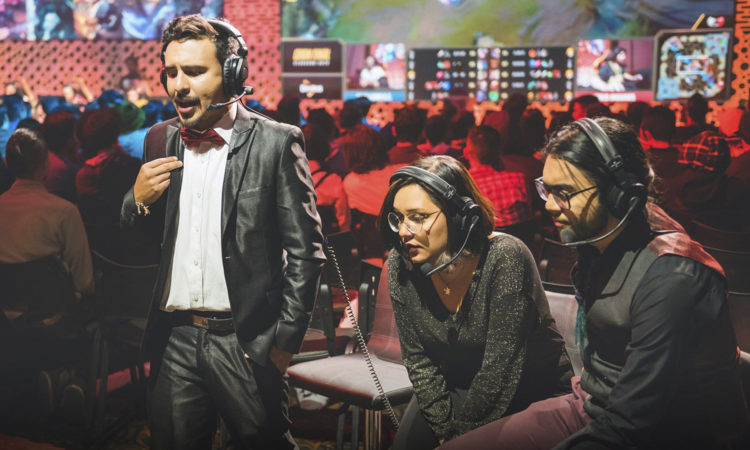 “Hi, guapos!” eSports commentator Lenore told her followers as she began her daily League of Legends stream on Twitch, the Amazon-owned live streaming platform where she spends at least four hours of her day, seven days a week.

“Today, we’re going until late,” she told the users connecting to her stream. “Until 3am.”

Lenore — whose real name is Juliana Ardila — is a gaming content creator and a League of Professional Video Games (LVP)-affiliated eSports caster, or commentator.

“I feel like living in Colombia, it’s like everything is against you, preventing you from becoming a pro-player or a streamer”

At 21 years-old, she has been narrating video games for a total of four years, and playing them for eight.

She started out playing video games, mostly her favorite, League of Legends, but after realizing her level wasn’t good enough to become a professional gamer, a passion for teaching others led her to stream commentary online.

This online personality she created through her online content earned her a fan base and, eventually, she was head-hunted to commentate professional eSports tournaments.

Ardila was born in Bucaramanga, Colombia and has lived most of her life in the capital city, Bogotá with her parents, who help her out financially while she puts her university degree on hold to pursue a career as a professional commentator.

Despite this, Ardila is paid by video streaming platform Twitch for the content she produces, according to the number of followers who connect to each stream, and was invited to commentate last year’s annual Mid-Season Invitational League of Legends tournament in Santiago, Chile.

Entering her seventh week of lockdown — imposed across Colombia to prevent the spread of COVID-19 — Ardila says that being confined to the house isn’t too much of a change to her normal routine, which involves staying at home to stream eSports related content online.

Daily routines have also remained relatively similar for professional gamers, who spend a normal working day at home, on their computers training with their relative eSports teams — which consist of players, trainers, psychologists, analysts and even nutritionists — and then proceed to play socially late into the night.

One change that both parties are experiencing, however, is an increase in interaction with eSports streaming platforms such as Twitch, Youtube, and the recently-launched Facebook Gaming, where viewers tune in to watch gamers play and listen to commentators like Ardila every day.

“More people have joined the [gaming] community,” Ardila said. “And the number of viewers per stream has also increased.”

Ardila, who normally sees an average of 57 viewers connected per Twitch stream, has seen her number of viewers increase regularly above 50 and sometimes peak to over 100 since the end of March, when nationwide lockdown orders were implemented in Colombia.

“Several friends have asked me how they can get into streaming, but I don’t recommend it”

And she isn’t alone. At the end of April, rapper Travis Scott teamed up with Twitch to perform live on a stream of the video game Fortnite, attracting a record-breaking 12.3 million viewers –over 1.6 million more than Fortnite’s previous record.

According to The Verge, live video game streaming on Youtube also increased by 15% over the space of a week in mid-March.

At a time when workers are losing their jobs, and the country is entering a financial crisis, this is also prompting more gaming fans to try their hand at becoming eSports streamers, to earn extra money.

“Several friends have asked me how they can get into streaming, but I don’t recommend it,” Ardila said, explaining that it is very difficult to become well-known enough to be able to earn enough money for full financial support.

These eSports commentators and online content creators are exactly what Camilo Lizarazo, a communications professional from LVP says Colombia’s eSports market is lacking at the moment.

While the country has a wealth of Youtubers and influencers, most of them work with make-up, in the culinary sector or analysing film and television.

This lack of content creators, Lizarazo explained, has meant that the Colombian eSports market lags behind other Latin American countries such as Argentina, Mexico and Chile, where the higher numbers of streamers and content creators have accelerated market growth.

Despite this, over the last two years in Colombia, the eSports industry has shown signs of steady growth.

Colombia’s national League of Legends league, the Golden League, is where teams of professional gamers compete in tournaments.

On Sunday, May 3, this season’s Golden League final — whose in-person event had to be cancelled due the current nationwide quarantine — drew in over 36,000 online spectators across streaming channels, and 40,000 on a special stream that was organized via TikTok.

Obstacles for Colombia’s eSports to overcome

In order for Colombia’s eSports industry to continue to flourish, both Ardila and Lizarazo agree that there are several hurdles it must jump.

One of these, which creates difficulties for both pro gamers and online streamers, is the intermittent level of internet connectivity, which has worsened as the country continues to remain at home during quarantine.

“I feel like living in Colombia, it’s like everything is against you, preventing you from becoming a pro-player or a streamer,” Ardila said. “No internet plan is enough,” she added, explaining that even despite paying for a 400mb internet connection, it still fails.

The other, which Ardila experienced first hand, is a cultural prejudice against gaming. “People don’t believe in the content,” she said, explaining how it had been difficult to convince her family to let her pursue eSports as a career path, as opposed to simply a hobby.

Although this has gradually improved over the last two years, it continues to be a problem for some, Lizarazo said.

‘eSports are the new playing field’

However, as conventional sports matches and tournaments are all on hold until the threat of COVID-19 passes, eyes are opening up to the potential of eSports as a platform to continue playing them, but online.

“The chip is changing,” Lizarazo said. “eSports are the new playing field. They’re no longer in a stadium, but now digital.”

For example, since lockdown was implemented, FIFA has set up an ePremier league, so that football fans can continue playing online. And now, these sports are approaching the LVP to ask for advice on how best to make this transition.

For both Lizarazo and Ardila, this is a historic move. Not just for sports fans, but also a window of opportunity for brands to change their stance around this type of content and invest in it, Ardila predicts.

“Lots of people who, beforehand, didn’t believe in video games, will start believing in them,” she speculated.

“Something like football … which is sometimes so old-fashioned, is now here. Joining the little video game world.”

And, as this momentum continues to gather, this is where eSports content creators can step in and really drive the industry forward.

“The industry works as long as there are numbers, and in order for there to be numbers, there has to be a fan base,” Ardila agreed.

“And when it comes to eSports, teams have to have a fan base.”

“Content is what moves the eSports industry,” said Lizarazo. “Because it’s what brands end up paying for.”