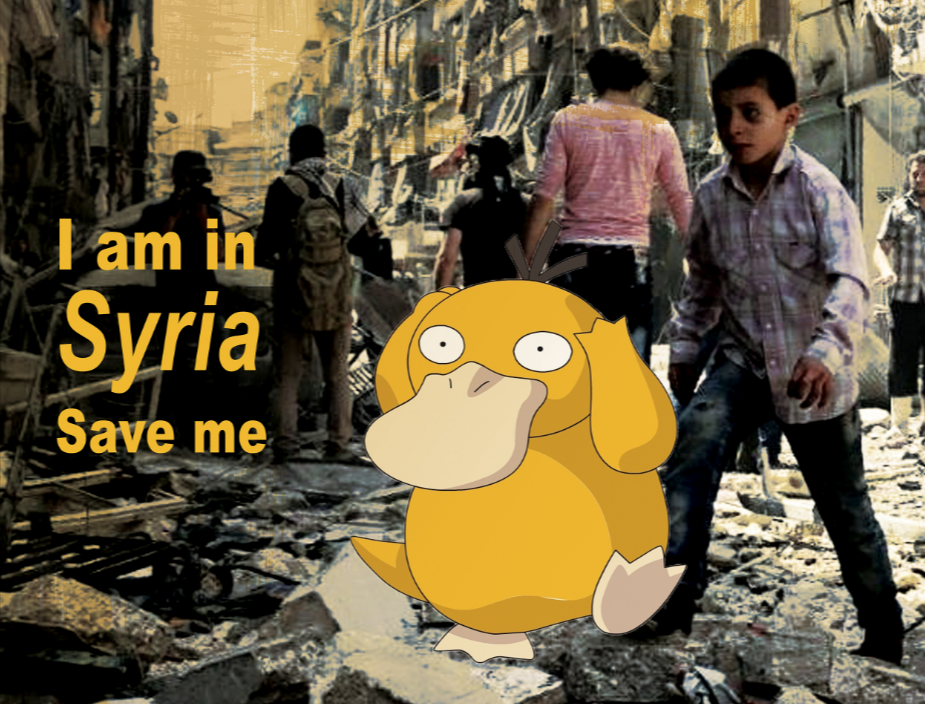 Syrian children are desperately pleading for help by asking Pokemon GO users to come and save them from “hell on earth.”

The Revolutionary Forces of Syria Media Offices (RFS) began a campaign to bring awareness to the children suffering in the war-torn nation while the entire world focuses on a Augmented Reality game.

The real reality of Syrian children and their families is what can only be described as a literal hell on earth.

The RFS Pokemon campaign took photos of Syrian children and photo-shopped various Pokemon characters along with the phrase “I am in Syria. Save me,” in both English and Arabic.

According to UNICEF Executive Director Anthony Lake, “Millions of children inside Syria and across the region are witnessing their past and their futures disappear amidst the rubble and destruction of this prolonged conﬂict.”

UNICEF estimates that “some 8.4 million children – more than 80 per cent of Syria’s child population – are now affected by the conflict, either inside the country or as refugees in neighboring countries.”

Additionally, more than 3.7 million Syrian children have been born since the bombs began to drop in 2011. That’s 1/3 of all children born in Syria who will grow up knowing only war.

Earlier this week, a US-led airstrike in the north of Syria killed more than 60 civilians, including children, in what has been reported as the  “largest loss of civilian life by coalition operations in Syria.”

The number of civilians killed by airstrikes in Syria is at 4,623 and counting, according to Airwars, an organization dedicated to “monitoring international airstrikes against so-called Islamic State (Daesh) and other groups in Iraq and Syria.”

Pokemon GO was founded on mapping technology created by a company that has the backing of both the CIA and the NSA. The technology was used by the US military in the Iraq war, and it later became integrated into Google Maps.

Pokemon GO was built on the back of the CIA-funded In-Q-Tel (IQT), and just as IQT’s mission statement declares, the technology was built “to support the missions of the Central Intelligence Agency and broader U.S. Intelligence Community.”