Is Google’s hesitance on WikiLeaks’ cybersecurity offer due to a technicality or actual CIA involvement? 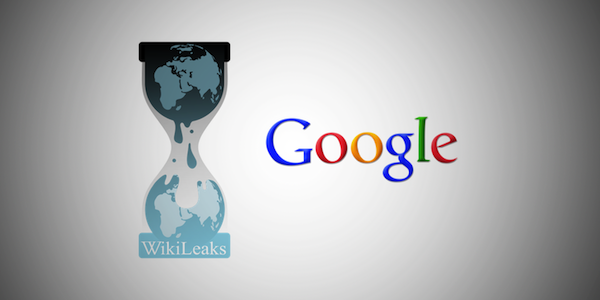 WikiLeaks’ offer to help tech companies strengthen their cybersecurity vulnerabilities is pushed aside by Google in what is construed as a possible conflict of interests.

“I think [the creation of the CIA] was a mistake. If I’d known what was going to happen, I never would have done it.” – Harry Truman, 33rd President of the United States

Since the release of WikiLeaks’ Vault 7 year Zero archive on March 7 that documents the CIA’s hacking capabilities, Founder Julian Assange has reached out to major tech companies to offer help on how to beef-up cybersecurity that would protect users from potential CIA and NSA attacks.

That offer has not yet been taken-up by Google, but Mozilla has embraced it.

According to a WikiLeaks tweet, “Organizations such as Mozilla have exchanged letters with WikiLeaks and have already been informed by WikiLeaks of some vulnerabilities. Google and some other companies have yet to respond other than to confirm receipt of initial approach. They have not agreed, disagreed or questioned our industry standard responsible disclosure plan. Most of these lagging companies have conflicts of interest due to their classified work for U.S. government agencies [author’s emphasis].”

WikiLeaks warned that companies who would not cooperate, like Google, would likely lose business to those that do provide protection against the CIA and NSA like Mozilla.

“Those fellows in the CIA don’t just report on wars and the like, they go out and make their own, and there’s nobody to keep track of what they’re up to.” – Harry Truman, 33rd President of the United States

The tech giant’s inaction to WikiLeaks’ request may allude to a cooperation between some of the US Government’s most secretive spy organizations and Google.

Alternatively, VICE Motherboard reported that WikiLeaks’ offer came with undisclosed conditions and these “demands” may implicate technicalities as a reason for why Google hasn’t agreed to accept the offer.

“WikiLeaks made demands, according to multiple sources familiar with the matter who spoke on condition of anonymity. WikiLeaks included a document in the email, requesting the companies to sign off on a series of conditions before being able to receive the actual technical details to deploy patches, according to sources. It’s unclear what the conditions are, but a source mentioned a 90-day disclosure deadline, which would compel companies to commit to issuing a patch within three months.”

The author, Lorenzo Franceschi-Bicchierai, also reported that a source told him, “WikiLeaks and the government hold all the cards here, there’s not much the tech companies can do on their own besides rabidly looking through their code to look for any issues that might be related.”

In any case, Google has a long history of cooperation with both the CIA and NSA.

“It is the function of the CIA to keep the world unstable.” – John Stockwell, former CIA official

In 2009, after reporting massive hacking attempts to Google’s servers coming from China, Google reached out to the NSA and made deal.

Niantic Labs’ Pokemon GO phenomenon was founded on mapping technology created by Keyhole, a company that has the backing of both the CIA and the NSA through the investment firm In-Q-Tel. The technology was used by the US military in the Iraq war, and it later became integrated into Google Maps.

According to Pando, Google began turning Keyhole’s tech “into what we now know as Google Earth. The acquisition would have gone unnoticed, had it not been for one not-so-tiny detail: Keyhole Inc was part-owned by the CIA and the “National Geospatial-Intelligence Agency” (NGA), a sister agency to the NSA. Keyhole Inc also had one major client base: US military and intelligence agencies.”

“I will splinter the CIA into a thousand pieces and scatter it into the winds.” – John F. Kennedy, 35th President of the United States

WikiLeaks’ Vault 7 Year Zero archive, “the largest intelligence publication in history,” tells specifically just how the CIA conducts cyberattacks and how vast its influence penetrates. WikiLeaks claims there are some 500 CIA programs aimed at exploiting cybersecurity risks, and Year Zero only covers “only some.”

“Unlike bullets, bombs or missiles, most CIA malware is designed to live for days or even years after it has reached its ‘target’. CIA malware does not ‘explode on impact’ but rather permanently infests its target. In order to infect target’s device, copies of the malware must be placed on the target’s devices, giving physical possession of the malware to the target.”

But it’s not just tech companies that are vulnerable to CIA and NSA intervention. Foreign governments are constantly under attack from US intelligence agencies.

Vault 7 documents how the CIA targeted French political parties and candidates in the lead up to the 2012 presidential election. The intelligence agency also uses the U.S. consulate in Frankfurt as a covert base for its hackers covering Europe, the Middle East and Africa.

According to a study by Dov H. Levin of Carnegie Mellon University, “Between 1946 and 2000, the United States and the USSR/Russia intervened in this manner 117 times, or, put another way, in about one of every nine competitive national-level executive elections during this period. Their methods ranged from providing funding for their preferred side’s campaign (a tactic employed by the Soviet Union in the 1958 Venezuelan elections) to public threats to cut off foreign aid in the event of victory by the disfavored side (as the United States did during the 2009 Lebanese elections).”

Likewise, the United States “has tried to influence the outcome of another country’s election” over 80 times between 1946 and 2000, according to NPR.

Adding to the long list of CIA interventions is the infiltration of the mainstream media through Operation Mockingbird, an allegedly-defunct “covert Central Intelligence Agency (CIA) campaign to create a mass media echo chamber during the Cold War.”

The CIA would plant false news and propaganda to “knowing and unknowing reporters who would simply repeat the falsehoods over and over again.” The idea behind this is if you repeat something often enough, even if it completely false, it will generally be accepted as truth.

“In the councils of government, we must guard against the acquisition of unwarranted influence, whether sought or unsought, by the military-industrial complex.” – Dwight D. Eisenhower, 34th President of the United States

The fact that Google hasn’t accepted WikiLeaks’ offer doesn’t prove that the company is working with the CIA. The reason may be as simple as a technicality presented in the undisclosed conditions of WikiLeaks’ demands.

However, given the intelligence community’s track record for toppling governments, infiltrating the mainstream media, MK Ultra, and scanning hundreds of millions of private emails, their modus operandi of secrecy make proving any claims extremely difficult.

The evidence, on the other hand, for CIA and NSA attacks against citizens, governments, and corporations is staggering, and Google’s silence doesn’t help negate claims that it is working with intelligence agencies, and this conflict of interest would be why they haven’t agreed to cooperate with WikiLeaks.