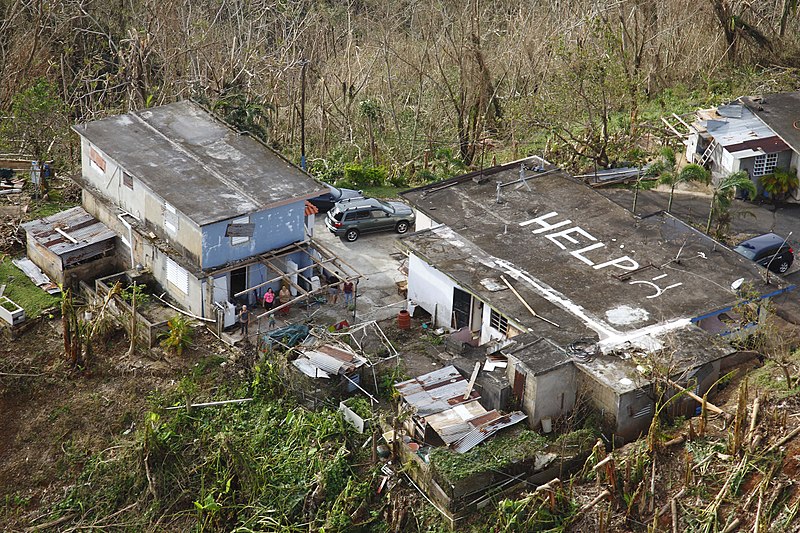 As you may remember, Puerto Rico was hit by a category 4 hurricane six months ago, Hurricane Maria. Or you may not remember, as media coverage has all but ceased to cover the aftermath of the disaster. It was the most devastating storm to hit Puerto Rico since 1932, and the island commonwealth still has a long way to go on the road to recovery. Local entrepreneurs are doing everything they can to help.

Documentary filmmaker Michael Thomas has collaborated with more than a dozen business owners, non-profits, and community leaders from Puerto Rico in a campaign entitled #DontForgetPuertoRico. Together, they have launched a website to raise awareness and to provide a medium through which people can donate money to the cause of rebuilding the island.

According to a press release, “the numbers in Puerto Rico are staggering. Eleven percent of Puerto Ricans still don’t have power. According to Jose Caraballo, economist and director of the Information Center for Census (CIC), the poverty rate has increased from 44.3 percent to 52.3 percent. It’s possible that number could go up to 59.8 percent this year meaning that Maria could push more than 500,000 people into poverty. FEMA estimates that 40-60% of small businesses have closed permanently.”

These current problems have gone largely unnoticed – for most natural disasters, the media only tends to focus on the immediate aftermath. The month after the event is when 75% of the media mentions occur. After that month, the event is largely forgotten about by the press. Michael Thomas, however, is making an attempt to change that.

#Don’tForgetPuertoRico is helping Puerto Rican initiatives for reconstruction get off the ground and get the funding they need. We spoke to the founder of the project, Michael Thomas, to get a more in depth picture.

How did you get started with your work in Puerto Rico?

I originally went trying to produce an episode in a series that I’m working on called ‘how to give effectively,’ and after all the natural disasters at the end of last year with Hurricane Harvey and Irma and Maria and wildfires and flooding, I wanted to find effective ways to give that weren’t simply giving 10 bucks to the Red Cross. I’ve read a lot of stories and I’ve done a lot of research on the Red Cross’ ineffectiveness at longer-term recovery and so I wanted to basically look into what are the most effective organizations to give to?

So that was the impetus and then I started talking to experts – I talked to people who study natural disasters, people who work at non-profits and then just asked them a lot of questions around what are effective organizations, what are effective uses of money, what are underfunded areas or ‘gaps,’ and through that, I ended up finding that 70% of natural disaster donations come within the first 30 days – a lot of that just due to the fact that that’s when all the media coverage is there.

As a result, a lot of that money goes towards the immediate recovery effort, and that’s things like giving out food and water and temporary shelter. But what that means is there’s a lot of areas in long-term recovery – things like reconstruction, rebuilding, resiliency – that end up getting underfunded.

I ended up doing a bunch of research on the Hurricane Harvey, Irma, and María examples and I found that through looking at Google trends data and through looking at media coverage – I analyzed TV transcripts from archive.org and found that 70% of coverage came within the first 30 days. So that’s exactly like the donation data. You see there’s a spike and then a dropoff. What I found also is that only 2 percent of funding goes to local organizations as opposed to the international ones.

So, what you find is that people who have the most at stake – the people who know their community best and the projects that really make a long-term impact are severely underfunded. So, I went to Puerto Rico with the goal of talking to local organizations that were working on long-term recovery efforts and wanted to hear about their approach and pair that with the expert interviews and share why it’s so important to fund those organizations and so that led to the #DontForgetPuertoRico project.

Would you elaborate on some of those local organizations who you spoke to on the ground?

Well, Resilient Power was started by a couple Puerto Ricans in New York who decided they wanted to help after the hurricane hit.  One of them was a guy named Jonathan Marvel who started a company called Marvel Architecture – he funded the initial part to get emergency power to people. They ended up growing the organization – they’ve now raised 2.5 million dollars for these projects – and they’re going to try to fund and build 100 of these solar systems. They’re 25,000 dollars each, so they’re all at a fairly low cost point. I think that the biggest thing is the fact that solar is something that requires a really big up-front investment.

For communities that don’t have a lot of money that’s just too much cash to put up.  But it ends up making those communities more resilient and they can actually save money over the long-term on electricity. They initially started out by having volunteers build up those solar systems, and now they’re paying contractors to build them so they’re creating jobs as well. They’re also working with companies like Tesla to use the battery technology from a Tesla car and store some of this power when the grid goes down.

I met Isabel Rullan of ConPRMetidos in San Juan, where their headquarters is. She immediately struck me as one of those amazing leaders who is really thinking about how to rebuild better schools rather than just rebuild the same infrastructure thats going to crumble in the next hurricane. She and her team are really thinking about how to build back a more resilient Puerto Rico.

And that’s looking across the board from things like how to build better housing, but also building the economy to be more resilient since there’s been so many young people leaving the island because there’s no jobs. They’re looking at ways to boost the tourism economy, boost local agriculture, increase yields so that farmers actually make more money after the hurricane. And they were very effective at raising money from the Puerto Rican diaspora community that they had built relationships with over the last five years.

So, Isabel and her team are basically leading these really forward thinking projects that are focused on being very effective per dollar which is really what I was looking to find and the organizations I want to help support.

Global Giving is supporting a project that we have on the website that’s “From Tarp to Roof.” Global Giving has a platform where you can go and find projects from local organizations and they are really trying to solve the problem that only 2% of money goes to local organizations as opposed to the big international ones, so they do a lot of vetting and look at what are the most effective organizations in the area, whether it’s natural disasters or reducing poverty.

Another organization that I thought was really great was “Shop and Hire Puerto Rico.” Right after the hurricane they launched a website where people could hire a Puerto Rican freelancer who might have lost their job from the hurricane since so many companies laid off a lot of employees since they were without power, couldn’t run their storefront, or didn’t have the cash reserve to get through it.

So, you could help by either hiring a freelancer or, since so many of these businesses actual physical storefronts closed down, they were trying to help support these online stores. We worked with them to highlight the best freelancers and the best online stores and then put them on the site.

Do you think there is anything the US government could do to help the situation at this point?

If you look at the 30 days after the hurricanes – Harvey and Irma got more funding, but if you look at FEMA’s commitment to each place now, it’s heavily going towards Puerto Rico. FEMA is giving way more money to Puerto Rico, and I would venture to say that the reason the federal government didn’t immediately pledge so much money was that people couldn’t get to Puerto Rico because of infrastructure difficulties – it took a long time to basically diagnose the problem.

I think a lot of people want to say that Puerto Rico didn’t get any support, and that’s not true. At the same time, they aren’t treated like a part of the United States – they’re still treated like colony.

Puerto Ricans are definitely marginalized by the federal government – there’s probably more that the federeal government can do to help – but at the same time there are a lot of Puerto Rican organizations that are doing really great work that I think average Americans can support if they want to do something to help.

Do you think it’s on the onus of the media to cover these disasters for more than just 30 days after the event? How could the media change its coverage of these events?

It’s a hard one, because there’s always ‘something.’ There’s always a new natural disaster and it would be unfair of me to say ‘you need to cover Harvey for longer’ – well, Irma came up, for example. I would say, I wish the media would spend less time covering celebrities, or what the latest fashion trend is.

There’s a paper that was written in 2012 basically analyzing the role of the media covering a natural disaster. It says that, “if the media’s role in disasters is understood only as communicating warning to the public, describing what occurred, and keeping the public informed post-event, then the results described here are satisfactory.

However, if the media also have a role in contributing to individual and community preparedness, recovery, and resilience, then these results are somewhat disappointing.”

In my opinion the media should not just talk about natural disasters as if they’re some crazy act of God and all the death and damage… the truth is, we can invest more in building more resilient communities, we can invest in preparedness, which as a whole gets 5% of total funding, but can save all this money and all these lives.

So, when the media only talks about a disaster within a five day period, it creates this false idea that there’s nothing we can do to prepare, and that the recovery only takes five days and consists of giving out food and water.