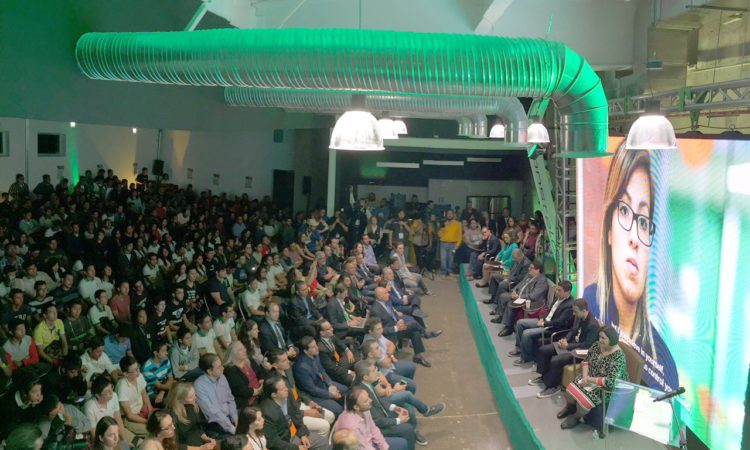 Technology Hub is a business incubator working along both sides of the US-Mexico border in Ciudad Juarez, Chihuahua and El Paso, Texas.

Its focus is to create high-skilled, high-paying jobs in the fields of technology and innovation and eventually convert them into the driving force behind the El Paso-Juarez border economy.

Founded in 2015, the Hub aims to “build a community of innovation leaders” by hosting events in which invited guests come to speak about innovation and technology.

“Hopefully, if we can convert people to start thinking in this way and speaking in this way, we will build a new vision for our region,” CEO Ricardo Mora told The Sociable, putting a five-to-ten year timeline on the Tech Hub’s goal.

Since 2017, it has housed a Fab Lab, which trains young software engineers and designers in 3D printing, design software and electronics. It also runs its own VR development facility.

How to boost a border economy through innovation?

The Technology Hub’s founding principles are largely based on research by the economics professor Enrico Moretti, Mora explained.

“Highly specialized innovation workers, such as engineers and designers, generate about three times as many local jobs for service workers,” wrote Moretti, in his 2012 book ‘The Geography of New Jobs.’

Service jobs, which the Tech Hub CEO prefers to refer to as “traditional sector jobs,” could include anything from factory workers, to call center workers, janitors or even security guards, Mora explained.

When asked exactly how this process worked while speaking at the Stanford School of Business in 2013, professor Moretti replied with a three-fold answer, reported Quartz at the time.

Firstly, innovation workers tend to be paid very well, he said. In El Paso, Texas, for example, STEM workers were paid almost double non-STEM workers in 2018, according to the US Bureau of Labor Statistics.

This means that they have more room to spend on personal and local services, which require the presence of low-skilled service workers.

And lastly, Moretti believes that the long-term effects of creating more specialized innovation jobs will encourage a clustering effect, meaning more high tech companies will eventually open up in the region, and so the need for service workers will continue to grow.

In Ciudad Juarez, service or traditional sector jobs constitute a large proportion of the workforce.

The city is home to the manufacturing industry, which employs around 400,000 people — approximately half of its working population — the Tech Hub CEO estimates.

While the manufacturing industry can sometimes require high-skilled engineers, most manufacturing jobs in Ciudad Juarez require a low skill set for assembling parts in factories, known as maquiladoras.

Maquiladoras are notorious for underpaying and overworking their staff, who can sometimes work up to 16-hour shifts in conditions that sometimes mean they won’t see daylight during their entire shift, claimed Julia Quiñonez, coordinator of the Border Committee of Women Workers.

And this is the reputation that Tech Hub CEO Mora wants to change.

“We couldn’t have a Tech Hub in Ciudad Juarez and not think that it shouldn’t cater to maquiladoras,” said Mora, stressing the size and number of manufacturing factories.

“The maquiladora is such a huge magnet,” he added, explaining that the factories attract local design engineer graduates whose talent is often wasted doing jobs that don’t challenge them. Other graduates simply seek employment elsewhere, which creates a brain drain.

Mora and his team’s aim is therefore to entice these talented innovators to get involved in the Tech Hub, where they can train themselves up and access new opportunities.

While Mora admits that not all maquiladoras are equally developed, the Technology Hub also offers tailor-made programs for the advanced maquilas, teaching them to use technology and data mining to lower staff turnover, for example. It has also run Hackathons for maquilas such as Bosch.

And when it comes to The Bridge, the accelerator gives maquiladoras first glance at the local supplier businesses coming out of the program, allowing them to save money and invest closer to home.

By working with companies that supply maquiladoras, The Bridge hopes to shift the factory’s economic models to ones driven by value rather than by cost.

Working through the pandemic

According to local attorney Gustavo de la Rosa, who defends maquila workers, COVID-19 could pose a grave risk for them if they do not return to work safely during the pandemic.

With the temporary closure of maquiladoras no longer obligatory in Mexico, he warns that some factories — which can employ up to 10,000 workers — make social distancing almost impossible. Workers also have to use public transport every day to get to work, which puts them at further risk, he adds.

And for Quiñonez of the Border Committee of Women Workers, the exploitation of factory workers was a serious problem even before the threat of COVID-19.

This pandemic has merely exposed the way that many maquiladoras continue to violate their workers’ rights, she said, referencing a “maquiladora paradise,” in which these factories can get away with different types of impunity.

Mora, on the other hand, believes that Ciudad Juarez’ working population must “learn to live” with the virus, suggesting that employees could be safe in maquiladora environments with the right precautions.

With most Tech Hub workers fortunate enough to be able to choose to work from home, he stressed that the COVID-19 pandemic has revealed the need for the incubator to accelerate its talent development.

In response, Mora’s team is looking to roll out a Tech Talent apprenticeship-style program within the next 90 days, in order to train up anyone (not just university students) who wants to learn about coding, 3D scanning and robotics.

“Now,” he said, “is the time people really need to push for taking technology as a must-have, rather than a nice-to-have.”

And this is exactly what the Tech Hub intends to do.