In 1982 the Sinclair ZX Spectrum brought affordable home computing to the masses, and – as mentioned in part 1 – hundreds of new software companies were formed.

One such company stands out above all the others, in my opinion. That was Ultimate Play the Game. Their first four releases were for the 16KB Spectrum, and right from the start it was clear that they were several cuts above the average company. The games were simple but tremendously addictive, with neat graphics and – for the Spectrum – rather good sound. The next two releases were more ambitious, aimed at the 48KB model, and they, too, were smash hits.

Ultimate, you see, were the ID Software of their day. Every release was eagerly awaited by the fans. And unlike most of the software companies of their time, Ultimate didn’t court the press. They almost never gave interviews. Some companies, like the now-infamous Imagine Software, had press officers and marketing people, and they spent huge wodges of cash on advertising. They routinely made very big shows about how cool their games were. They attempted to make superstars out of their programmers. Ultimate didn’t bother with any of that: they put all their energy into their games. They didn’t announce anything until it was actually finished and ready to go. (An interesting contrast to the current practice of announcing a game in, say, June 2008 and not releasing it for another four years. [cough] Diablo III [cough])

The upshot of that is that we, the eager public, had no clue what was coming up until the adverts appeared in the magazines, and even then we didn’t learn much, as this advert for Sabre Wulf illustrates. 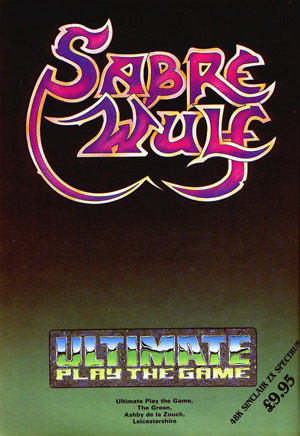 See? That’s all we got. The name of the game. No pre-release demos, no screenshots, no nothin’. Just the logo. And it worked… I was so anxious about the next Ultimate release that when I saw the Sabre Wulf advert I actually had heart palpitations.

Sabre Wulf was great, a huge game with lovely big colourful graphics that effortlessly zipped about the screen.

But it was nothing compared to what Ultimate gave us a few months later: Knight Lore. Again, all we knew was the name, until we loaded up the game and started to play. Knight Lore wasn’t the first Spectrum game to use isometric 3D (that was 3D Ant Attack, released a year earlier by independent programmer Sandy White) but it was the first one that actually looked good. The complexity of the programming – and the speed at which the game ran – absolutely blew everyone away. Remember: in those days there were no dedicated graphics cards or anything of that nature. Everything you saw on screen was there because the programmers themselves worked out how to put it there.

Years later, when Ultimate’s co-founder Tim Stamper gave one of his rare interviews, he strongly hinted that Knight Lore had actually been finished before Sabre Wulf – but they chose to hold off on its release because the market just wasn’t ready for it. In other words, they were so far ahead of their competitors that Knight Lore would have utterly destroyed them. Imagine if today Toyota announced a flying car that was one hundred per cent safe, was fuelled by sea water and cost the same as an ordinary family car… Wouldn’t that be great? I’m not saying that Knight Lore was as big a technological leap as that, but it was still pretty darned impressive.

Sinclair Research, the company behind the Spectrum (and its predecessors, the ZX-80 and ZX-81), made a lot of money very quickly, and the man behind the company, Clive Sinclair, became famous. A natural inventor, Sinclair had already created one of the earliest pocket calculators, one of the first digital watches (again, kids, ask your parents…. or grandparents), and a hand-held TV set that actually worked.

But not everything he released was as successful as the Spectrum. First off, the Speccy’s official peripherals (as mentioned before, there were hundreds – if not thousands – of unofficial ones) were great on paper but decidedly less great in reality, like the ZX Microdrive. Back in those days home computers didn’t have internal storage like hard drives, and even floppy disks (more accurately described as rigid squares, just in case you’re ever tempted to track one down in your local Museum of Computing) were far too expensive. The only affordable mass-storage system we had was the humble cassette recorder.

(Floppy disks, cassette recorders… Crikey, I’m really dating myself now! Which is ironic in a way, because back in the 1980s no one would date me. Sigh.)

The user connected the recorder to the computer and pressed “Record” (more accurately, we had to press “Play” and “Record” at the same time) then instructed the computer to “save” the data or program that we didn’t want to lose forever. The computer recorded a series of high-pitched noises onto the tape. Imagine a Scrillex track in a blender, that’s what it sounded like. Later, when we wanted to re-load the program, we played the tape back. After first rewinding it of course. 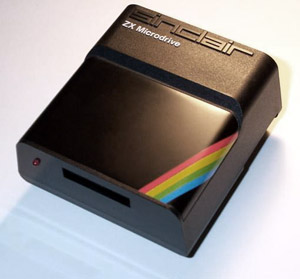 The ZX Microdrive did pretty much the same thing, but used a special tape cartridge instead of a standard cassette. The Microdrive was able to read the tape at a much greater speed than a cassette, plus the tape inside was a single loop, which meant no fiddly rewinding back and forth trying to find the start of the program. Each cartridge stored a massive 85KB of data – enough for two full-sized programs.

Trouble was, the Microdrives weren’t exactly reliable. The tapes sometimes got jammed inside the cartridge, or they’d stretch, rendering the data useless. Plus they cost about eight quid each, a lot of money in those days.

The Microdrive was the first strong indication that, perhaps, not everything Sinclair invented was going to be brilliant…

The Spectrum was followed up in 1984 by the Sinclair QL. It was aimed at the small business market and it missed its target by about half a light-year. Mostly this was because even though floppy drives were now readily available and getting cheaper all the time, the guys at Sinclair figured, “Hey, we spent a fortune inventing these Microdrives – let’s not let all that effort and money go to waste. Let’s build a couple into each QL! Yeah! Screw the industry standards – people’ll buy our stuff because we’re friggin’ GODS!” (I’m paraphrasing here, of course).

But even with the dreaded rattly little Microdrives built in, the QL might have been successful if Sinclair had made it compatible with the Spectrum. Not doing so was a huge, huge mistake. If it had been possible to run Spectrum programs on the QL, they’d have sold a hundred times as many units. Heck, if it had been even possible to convert Speccy programs for the QL, that would have been something (OK, it was possible, but not easy: completely different processors, operating systems and architecture meant that every program would have had to be redesigned from scratch – which wasn’t worth the trouble considering how few QLs had been sold).

And then came the Sinclair C5. You don’t want to know. Really, you don’t. [Note to editor: please don’t be encouraged to insert a photo of a Sinclair C5 here – we don’t want to traumatise the readers any further!]

Over time, Sinclair released other Spectrum models. The Spectrum+ came first. Internally it was identical to the 48KB model, but it had a new case with a slightly better keyboard. This was not overly popular because the new case meant that lots of the existing peripherals would no longer fit. Then came the 128KB model, which (Sinclair having learned from the QL debacle) was backwards-compatible with the 48KB model, and featured a few rather nice new enhancements.

Then Sinclair went bust, was taken over by Amstrad, and we were treated to a succession of new Spectrums: the +2, +2A, +2B and the +3. Not many people cared by that stage, because we’d all moved on to bigger machines like PC-compatibles, Amigas, or the Atari 520ST.

The golden years of the Sinclair ZX Spectrum were over, but those of us who were there, on the front-lines, spending night after night burning the midnight oil at both ends as we attempted to develop complex programming algorithms that would explain why we didn’t have social lives, those years were memorable.

So, yes, if you’re looking at the Speccy and thinking about how astonishingly primitive it is, you’re right. It’s primitive now. But it wasn’t primitive back then.

I bought mine in mid-1983, taught myself to program it, and a couple of years later was a proficient enough programmer to leave my job in the post office and move into the computer industry, where I remained for almost fourteen years and earned a heck of a lot of money. Which is not a bad return on a £99 investment.

Do folders on the Google Drive domain suggest the end for Google Docs?