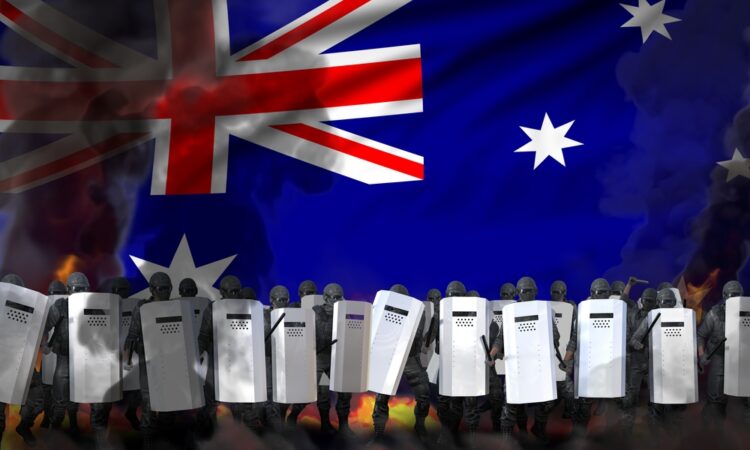 Australians all over the country are risking arrest to fight for their freedoms against vaccine passports and government lockdowns as mandatory electronic check-ins merge with proof of vaccination.

“You must stay home. Only leave your home if you have a reasonable excuse” — Greater Sydney Restrictions, August, 2021

In parts of Australia, people are not allowed to travel more than five kilometers from their homes, and they face arrest for the crime of being in public without a reasonable excuse.

Protesting the loss of freedom at the hands of the government is illegal under Australia’s current public health orders, and the police are threatening mass arrests for thousands of demonstrators.

With military helicopters corralling citizens from above as if they were livestock, the Australian government has unofficially implemented Martial Law throughout the land to enforce its lockdown policies.

JUST IN – Australia sends in the ARMY to enforce it's "Zero Covid" lockdown: Soldiers and police will patrol Sydney alongside helicopters with blaring sirens telling people to disperse or they’ll get fined.pic.twitter.com/rO8dMPAaq1

Now that regional governments are merging contact tracing check-in with proof of vaccination, an individual’s access to places, goods, and services will soon be granted or restricted based on vaccination status.

The people of Australia are rising up in the thousands, and truck drivers throughout the land have organized a strike in protest of the mandatory vaccinations and lockdowns.

And with Australia buying 60 million doses of the Pfizer vaccine for 2022 and 25 million doses for 2023, there is very little indication that the “public health” measures will abate anytime soon.

On top of that, Australia is building multiple quarantine camps for incoming travelers: one is already operational and there are several slated for completion in 2022.

Mandatory check-ins are morphing into systems of digital identity and social credit in Australia where vaccine passports are now being merged with contacting tracing apps, and the people are rising up against government restrictions.

“Australians all let us rejoice, for we are one and free” — Australian National Anthem

In Australia, the list of activities that require electronic check-ins for contact tracing is enormous, and when combined with the coming vaccine passports, the government is slowly building a system of social credit in which the people are either rewarded or punished based on the data and credentials recorded in their digital identities.

To gain a better perspective on the scope and scale of the resistance, here’s a visual look at the pro-freedom demonstrations taking place across Australia, followed by a deeper dive into the rules and regulations surrounding mandatory electronic check-ins and how they are morphing into systems of digital identity and social credit with the merger of vaccine passports.

As of today, 27.42 percent of all Australians are “fully vaccinated,” according to the latest figures published in The Guardian.

The Australian government says it will end lockdowns only when 80 percent of the population has been fully jabbed.

But the term “fully vaccinated” is a moving goal post, and since Australia has already ordered booster shots for the next two years, the number of jabs a citizen would have to take in order to participate in society in the years to come remains unclear.

The people have had enough, and Australians all over the country are risking arrest to fight for their freedoms.

Australians petitioning the government for a redress of grievances are beaten and arrested in the name of public health.

The government of Australia first disarmed it citizenry of course for everyone’s “safety” and now they’re arresting people and sending them to jail for eight months for organizing a protest on Facebook! pic.twitter.com/Snjj0vqGJH

Australians protest “border closures” that are dividing neighborhoods and cities right down the middle.

Imagine if the police prevented you from going between NYC, NJ, and Queens. That’s what is happening in Australia. pic.twitter.com/NdTK9ladAp

Police were dispatched in Melbourne, Australia during anti-lockdown protests that took place amid new lockdown measures. Pepper spray was deployed at the protest and over 200 people were arrested. pic.twitter.com/S8qzQS0wMK

A man on horseback was filmed encouraging people to cross over the QLD — NSW border, shouting, “Cross over! They cannot arrest all of us!”

Queensland-New South Wales border in Australia Protest with a man on horseback today ……”Cross over..They cannot arrest all of us.”….pic.twitter.com/cbD8cXiDbn

Based on tips from social media posts, authorities are going door-to-door in Australia asking people if they are aware of any protests taking place while reminding them that protesting is illegal.

Some Australians are not having any of it, exercising noncompliance to police interrogations.

Meanwhile, truckers, aka “truckies,” are staging a nationwide strike intended to grind the nation to a halt.

Angry truck drivers have briefly blocked one of Queensland's busiest highways as part of a protest against lockdowns and vaccine mandates.@Bianca_Stone is there. pic.twitter.com/b5wdoeHVUl

M1 southbound blocked. Truckies have lots of supporters watching on. Police have asked them to move, they’ve refused. So tow trucks being called in @TheTodayShow pic.twitter.com/rw3Mp6QPgo

New South Wales MP Craig Kelly gave his full support to the truckies’ protest, saying, “They don’t deserve to have their jobs threatened by COERCION.”

I stand with the Truckies of Australia

Without Truckies our great nation grinds to a halt

They don’t deserve to have their jobs threatened by💉 COERCION

Truckies have my FULL SUPPORT pic.twitter.com/sXliBOkLR1

“I got offered money to put out a public service announcement for you everyday plebs to stay home […] I refused to do that shit,” said Bogut.

“Whether you’re an actor, an actress, sports star, an influencer from getting a nice boob job and looking good — I don’t care — whoever you are, why don’t we hear you speaking up?” Bogut asked, adding that most celebrities in Australia had been “muzzled” from speaking out against government restrictions.

New South Wales (NSW), Australia is merging its contact tracing check-in app with proof of vaccination, which is the latest step towards unofficially implementing full-on digital identity schemes where social credit is the new normal.

NSW Government to introduce an app that will link check-in system and vaccine passports. pic.twitter.com/GoDkPxE9ob

The Service NSW app is growing its list of “features” to include an individual’s vaccination status, and the app has all the hallmark features of a digital identity scheme that is used to determine who has access to places, goods, and services.

“Many businesses are required by law to collect your details (name, phone number and/or email) to assist NSW Health with contact tracing,” according to the NSW portal.

Failure to comply with public health directions can result in six months imprisonment.

Queensland businesses and activities that require check-ins include:

Majority of Australians believe vaccination should be an individual choice

A recent Resolve Political Monitor survey of 1,607 people shows that 51 percent of Australian voters believe that vaccination should be an individual choice while 48 percent believe vaccinations should be mandatory. 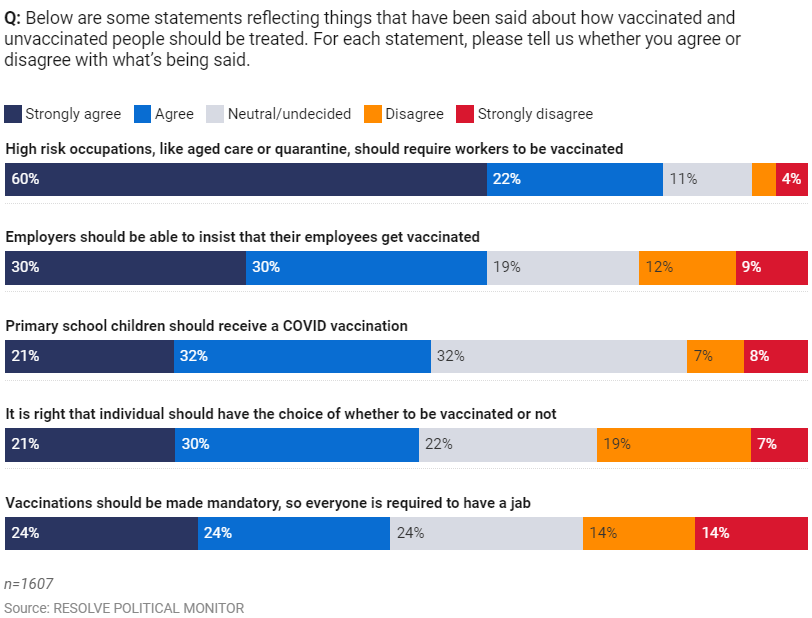 An editorial from The Sunday Age suggests that those who support mandatory vaccination and vaccine passports are “growing weary of reduced freedoms.”

If that were really the case, and by that logic, then 48 percent of Australian voters could be likened to bullied school kids who’d prefer to keep giving up their proverbial lunch money in the hope that it will all go away rather than stand-up to their tormenters.

Knowing full-well that the COVID injections have never been proven to prevent human-to-human transmission, governments around the world are making it next to impossible for citizens to live a normal life without some type of health passport.

By coercing, manipulating, and incentivizing individuals to show their papers everywhere they go, nations around the world are quickly becoming police states, and they are looking more like Communist China by the day.

Once vaccine passports are normalized into digital identity schemes, they can be used for any given “crisis,” such as another deadly virus, climate change, or obesity.

From there, digital identities can be extended to all walks of life with restrictions on what you can buy, where you can travel, what information you are allowed to receive, and other goods and services you wish to access.

When a person’s freedom is dependent upon what their digital identity says about them, what you have is an authoritarian social credit system.

Australia is part of the growing list of countries all over the world where citizens are rising up against vaccine passports and government-imposed lockdowns. 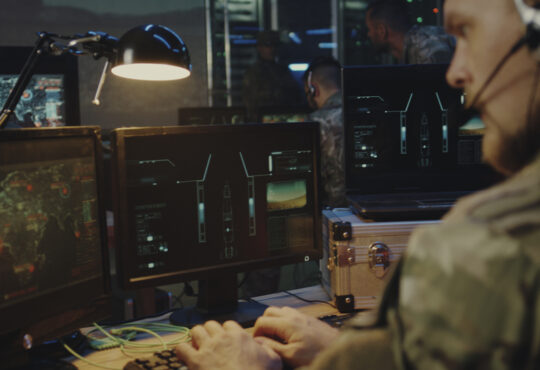