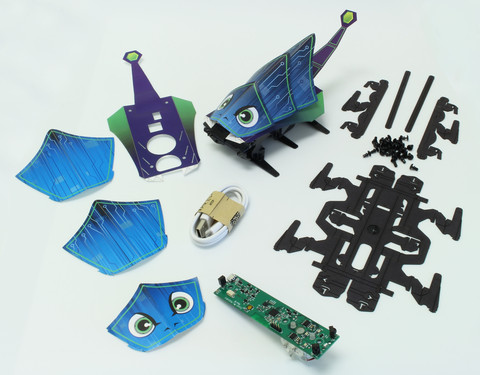 Sociable’s George Chilton takes a look at a new educational robot for kids from Dash Robotics and talks about the pros, the cons, and some other options you could investigate.

What has six legs, fits in the palm of your hand, and will probably get eaten by the dog? I’m talking about a Kamigami bio-inspired robot, of course. This week, Dash Robotics announced that their build-it-yourself robot will be available to buy for under $70 in 2016.

This is great news for parents who want to teach their children about machines and simple programming in a fun way. In this article I’ll talk about some of the pros and cons of the Kamigami robot and take a quick look at how this little beasty compares to other educational robotic offerings for kids.

While $70 isn’t a cheap toy for most parents, this little fellow provides lots of fun and educational value for your kids. The Kamigami robot (named after a type of origami paper) will be easy to put together, and comes with colorful, interchangeable shells. The kid in the video (below) apparently has no problem snapping it together, and it is lightweight, extremely tough, and reportedly rather quick on its many feet.

Putting fun to one side for a moment, kids can learn about the relationship between programs and machines, and have the chance to do some (very basic) programming with an intuitive drag-and-drop interface, which is used to modify how the robot behaves.

Kids can also explore how machines work, as they must install the electronics themselves. They will see, and maybe even be inspired by, a circuit board, battery, a light sensor, IR sensor, gyroscope and an accelerometer. Not only that, but the cool-factor ups when you hear that it will be controlled by a programmable iOS and Android app.

Now there is a catch. Most robot-free households would think that one robot would be enough for anyone, but Dash Robotics begs to differ. The company has made the model affordable, but also gives a lot of added value when you add more than one coggy little critter to the mix.

Buy one for your child and I can almost hear their plaintive cries tugging at your heartstrings/wallet a week later. There’s no doubt in my mind; your offspring will ask for a second and then third robot buddy so they can race or have robot battles together. Gua-ran-teed.

If you do cave in and stock up on a robot army for your children, the inbuilt IR sensor allows the Kamigami bug to ‘tag’ other robots when the app controlling it is set to ‘team play’ mode.

Depending on how the app has been programmed, tagging other robots will have different effects. There are several games that can be set up; for example there is the exciting sounding robot battle game, which is perhaps a prescient of vision things to come, whereby robots try to win by shooting IR lasers at each other. There are other less apocalyptic games, too, such as the robot relay race and sumo-bots, where a table becomes the dojo and the Kamigamis sportingly try to push each other off the edge.

Let’s hope they haven’t developed consciousness because the battery only lasts an hour or so. In my view, this is a bit of a minus point. The robot is rechargeable, however, and that hour will presumably be long enough for most younger children (and will give your ankles a brief respite from the constant robo-bumps).

How do you buy a Kamigami robot?

Well, it’s not on the shelves (or scuttling underneath them) just yet, but you can get ahead of the game and land yourself a 30% discount by investing $49 on their kickstarter page.

If you are more patient and/or think you can stave off the inevitable decent into a robot controlled dystopia, you’ll be able to purchase the cute little androids for $69 directly from Dash Robotics and on Amazon.com next year.

How does it compare to other robots for kids?

When I was younger, I built cities from Lego and biplanes from Mecano. It seems today’s little ones will be busy building our robot overlords in their bedrooms. Up to now; however, most recreational robots have been out of ‘normal’ price ranges, or have at least edged on the expensive.