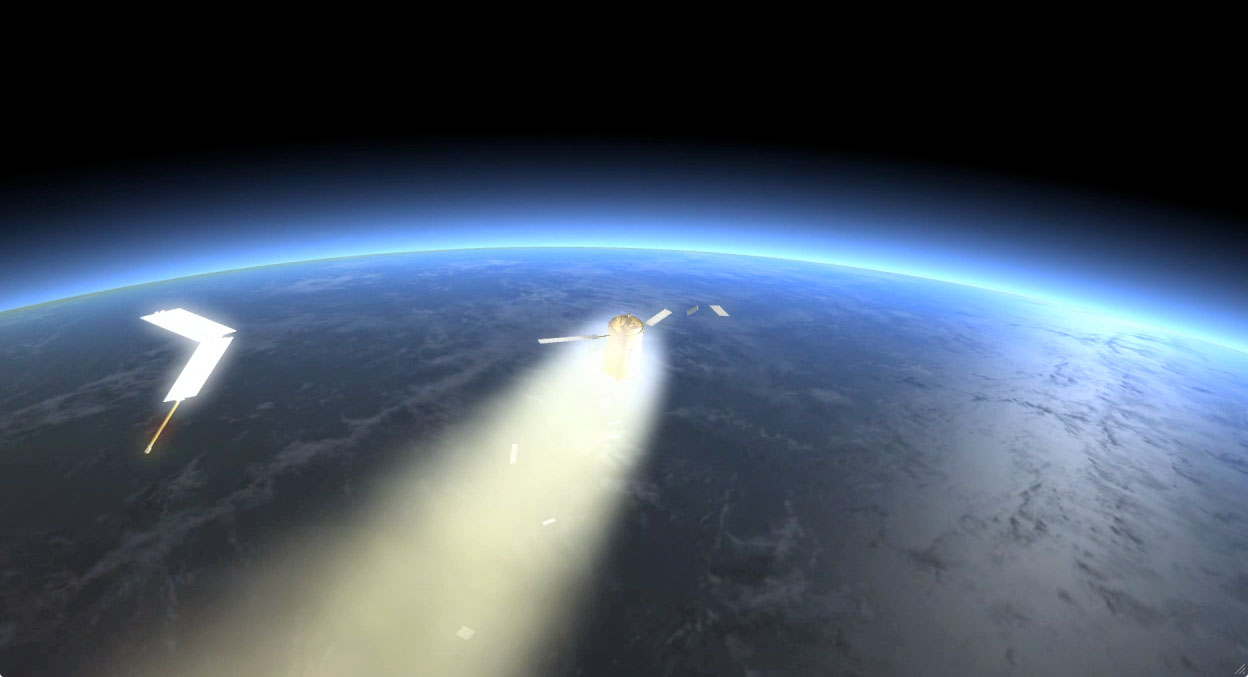 The Johannes Kepler ATV cargo ferry crashed into the Earth’s atmosphere at 8:04 PM GMT forming a massive shooting star which streaked across the Southern Hemisphere for 40 minutes.  The remains of the spaceship plummeted into the Pacific 2,500 km east of New Zealand, 6,000 km west of Chile and 2,500 km south of French Polynesia over an hour later at 9:43 PM GMT. 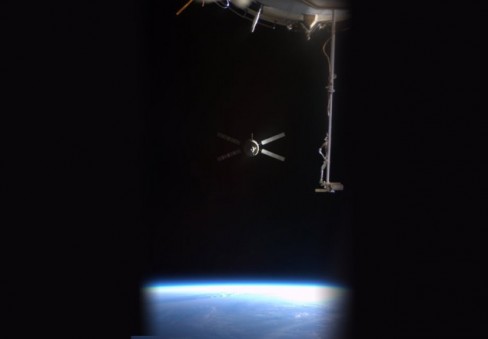 The entire re-entry sequence had been planned since before Johannes Kepler docked with the International Space Station four months ago and took two day to complete, during which time the ESA was live tweeting the craft’s destruction on its main, @ESA and operations, @esaoperations, Twitter accounts.

At 5:09 PM GMT on June 20 the ESA tweeted that the ATV had separated from the ISS to begin its two day controlled crash landing into the Earth’s atmosphere.  This initial manoeuvre was designed to place significant distance between the ISS and Kepler as well as to raise the ISS 40 kilometres further above the Earth.

Although this was a suicide mission for the craft it was still able to provide valuable data to the ESA concerning the nature of atmospheric re-entry.  On board the ATV was a prototype “Black Box”, developed by the US based Center for Orbital and Re-entry Debris Studies, which recorded detailed information about the “acceleration, roll, pitch and yaw rates, temperatures and GPS coordinates” of the craft as it fell to the Earth.

Because of this important final mission the ESA performed an unplanned manoeuvre on Kepler two hours after it undocked from the ISS following a warning from NASA that the a piece of space debris was on a collision course with the space craft.

This was performed one hour after the ship began its deorbit.

At 7:50 PM GMT on July 21 Kepler, with less than three hours to complete destruction continued its rapid deorbit above the Earth, passing over South America, where its mission began four months previously.

And two hours later passing over the Himalaya Mountains.

At 9:21 PM GMT the ESA tweeted that Kepler had entered the upper atmosphere and was less than 20 minutes from atmospheric destruction.  At the same time Mission Control in Toulouse, France commanded Kepler to start tumbling into the atmosphere, his ensured it was “grabbed” by the Earth and broke up on re-entry, but it also prevented the craft from sending a constant stream of data to Control Centre. 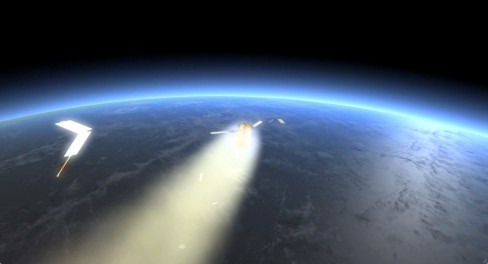 Charlotte Beskow, Deputy Head of the ATV programme was quoted in one ESA tweet at this time saying, “There is nothing more we can do but watch.”

Predicting 19mins before start of ATV# fragmentation in atmosphere #bigdive

Some 20 minutes later the ESA confirmed in a Tweet that all contact had been lost with Kepler, indicating that the craft had been destroyed in the atmosphere.

Finally the ESA tweeted data on the re-entry, reporting that Kepler had been successfully destroyed beginning at 80Km above sea-level.

Johannes Kepler was the largest payload sent into space by the European Space Agency and also achieved the largest boost is space flight since NASA’s Apollo Missions some 40 years ago.

The entire operation caused all but the heavy parts of Kepler, which were designed to withstand atmospheric temperatures, to disintegrate.  Some of the only parts of the craft to make it to Earth were the heavy docking adapter and main engines which plunged into the Pacific.

Speaking of the Kelper Mission the Head of the ESA’s ATV Programme, Nico Dettmann, said,

“ATV has shown again its capabilities in servicing the Station and we are looking forward to the next, Edoardo Amaldi, which will be shipped to Kourou in August for launch in early 2012.”

Over 146,000 Irish households and businesses still on 2Mbps broadband or less