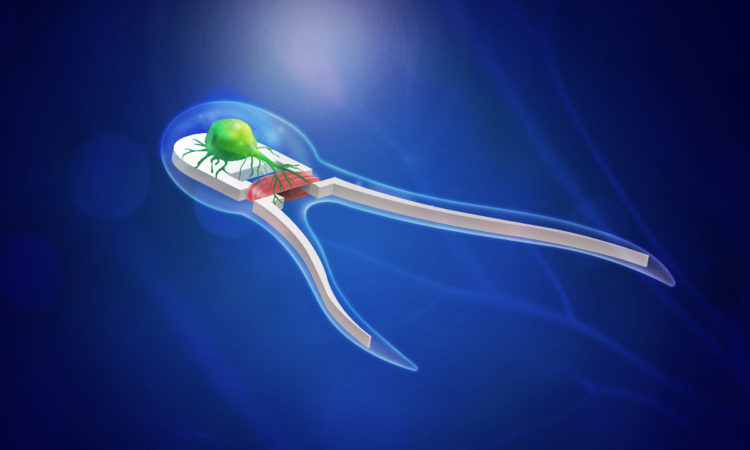 “Our first swimmer study successfully demonstrated that the bots, modeled after sperm cells, could in fact swim”

Conceived at the University of Illinois, researchers announced on Monday that they have built microscopic biohybrid robots (biobots) that can swim.

The biobots are modeled after nature, in particular sperm cells, and are propelled by muscles and nerves derived from rats.

Research teams led by Taher Saif and Rashid Bashir worked together “to develop the first self-propelled biohybrid swimming and walking biobots powered by beating cardiac muscle cells derived from rats,” according to the National Science Foundation.

“Our first swimmer study successfully demonstrated that the bots, modeled after sperm cells, could in fact swim,” Saif said.

The two-tailed, sperm-inspired biobots are powered by skeletal muscle tissue stimulated by on-board motor neurons. Upon exposure to light, the neurons fire to actuate the muscles.

A major obstacle to anyone trying to fuse machine with organic matter is compatibility, yet the team discovered that the neuromuscular tissue was compatible with their synthetic biobot skeletons.

According to Saif, this advance could lead “to the development of multicellular engineered living systems with the ability to respond intelligently to environmental cues for applications in bioengineering, medicine and self-healing materials technologies.”

In other words, a future version of these sperm-inspired biobots could one day be swimming through your body to seed stem cells, target illnesses, or administer drugs internally.

Saif laid out his vision back in 2014 when the project began, and five years later it is becoming a reality.

“The long-term vision is simple. Could we make elementary structures and seed them with stem cells that would differentiate into smart structures to deliver drugs, perform minimally invasive surgery or target cancer?” he said at the time.

According to the research paper published in the Proceedings of the National Academy of Sciences (PNAS), the significance for such a breakthrough is great.

“This paves the way for the development of biohybrid embodied platforms as models to gain deeper understanding of motor control, with potentially broad impact in robotics, bioengineering, and health.”

However no two “living machines” can be expected to develop the same, and although they have created biobots that can swim, it may be difficult to consistently replicate those abilities.

“One may move faster or heal from damage differently from the other – a unique attribute of living machines,” said Saif.

On a related note, the Pentagon has been researching bioelectronics for military use.

In February, the Defense Advanced Research Projects Agency (DARPA) launched the Bioelectronics for Tissue Regeneration (BETR) program for the intelligent healing of complex wounds — like those suffered on the battlefield.

“Wounds are living environments and the conditions change quickly as cells and tissues communicate and attempt to repair. An ideal treatment would sense, process, and respond to these changes in the wound state and intervene to correct and speed recovery,” said BETR program manager Paul Sheehan, in a statement.

It seems that DARPA could look to the University of Illinois for inspiration, if it hasn’t already.

The swimming biobot project is part of a larger National Science Foundation-supported Science and Technology Center on Emergent Behaviors in Integrated Cellular Systems, which also produced walking biobots developed at Illinois in 2012.