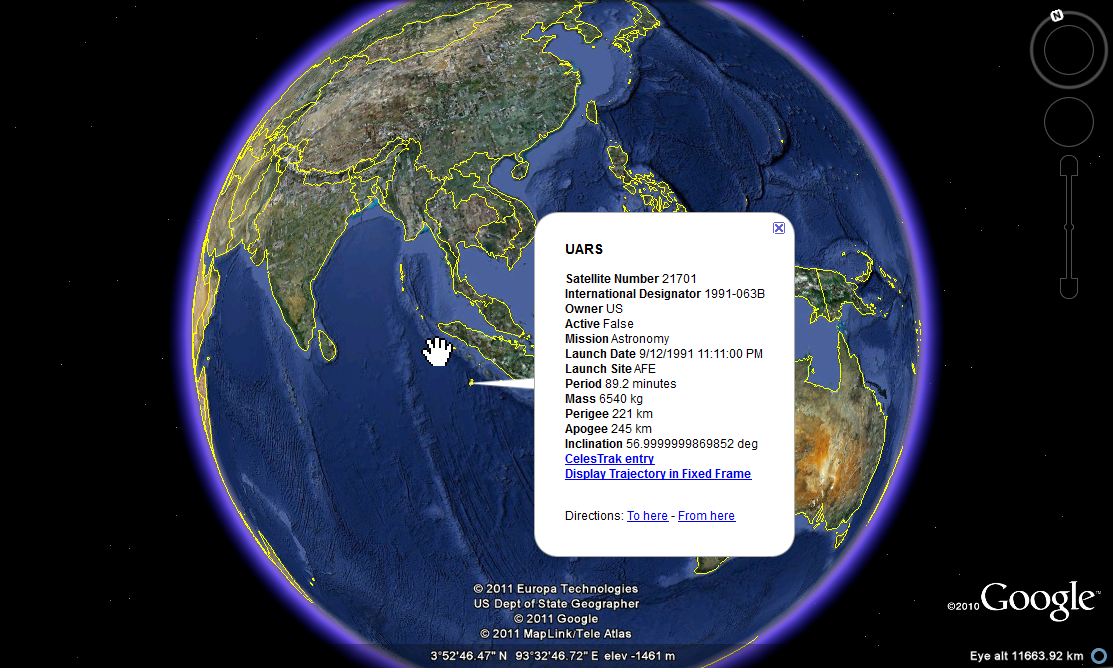 “NASA’s decommissioned Upper Atmosphere Research Satellite fell back to Earth between 11:23 p.m. EDT Friday, Sept. 23 and 1:09 a.m. EDT Sept. 24. The Joint Space Operations Center at Vandenberg Air Force Base in California said the satellite penetrated the atmosphere over the Pacific Ocean. The precise re-entry time and location are not yet known with certainty.”

With this NASA officially announced that UARS crashed to Earth. But as the space agency says, they are not entirely sure where.

After a day spent tracking the Upper Atmosphere Research Satellite, NASA’s post-reentry assessment of the satellite’s status begin at 5:30 am GMT when the agency tweeted that it believed the satellite had entered the atmosphere (they also asked if everyone was OK).

It’s possible that #UARS is down by now. (Everybody OK out there?) We’re waiting for confirmation from US Strategic Command.

About an hour later the agency confirmed that that the satellite entered the atmosphere over the Pacific Ocean and the pieces that survived probably crashed on Canadian soil.

We’re still waiting for #UARS Done! confirmation. If debris fell on land (and that’s still a BIG if), Canada is most likely area.

The latest data available to us outside of NASA came from a visualisation of  United States Strategic Command (USSTRATCOM) satellite data on Google Earth which stopped tracking UARS over the Indian Ocean. 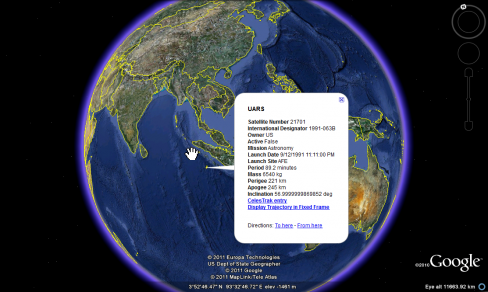 If you are in Canada and find a chunk of satellite in your back yard you need to know two important things, the first is that you can’t keep it;

@LennarddeHeer Any pieces of #UARS found are still the property of the country that made it. You’ll have to give ’em back to U.S.

The second is you, according to a United Nations agreement (The Convention on International Liability for Damage Caused by Space Objects), can get compensation.

@GordonBossman Liability for damage caused by space debris is regulated by a 1972 international treaty that the U.S. has signed on to.

According to the convention, “A launching State shall be absolutely liable to pay compensation for damage caused by its space object on the surface of the earth or to aircraft flight.”

Interestingly, nowhere in the document does it mention the word “death.”

This isn’t the first time this year that the destruction of a satellite has been live tweeted.  In June the European Space Agency live tweeted the destruction of their ATV-2 Space Freighter, Johannes Kepler, after it left the International Space Station.  Although, unlike UARS the ESA wanted to destroy the satellite and was able to control Kepler’s reentry and guide it to a splash-down in the Pacific Ocean.