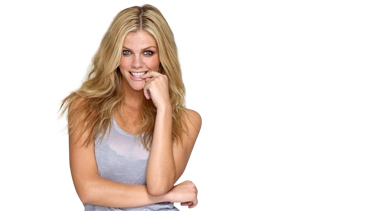 It sounds like something from 80s cult classic Weird Science but next month Esquire readers and Barnes and Nobel customers will be able to ‘interact’ with a life size virtual supermodel.

US lad’s mag Esquire will be giving its readers an “active and engaging experience” with its latest cover girl, Brooklyn Decker, through their iPhones.  From February Barnes and Noble customers will be able interact and take pictures alongside Decker using a custom built Esquire iPhone app.

With the app Esquire readers can get up-close-and personal with a life size Decker as a virtual copy of her will appear in each of Barnes and Nobel’s 700 US stores.  The app works by detecting the user’s location and, provided they are within 45 meters (50 yards) of the shop’s magazine area, an image of the model will be overlaid on the screen of the user’s iPhone.

Esquire said “We are fortunate to have the opportunity to work with [app developer] GoldRun to use this radical next phase in Augmented Reality to engage our readers like never before and allow them to interact with one of the sexiest women in the world, Brooklyn Decker.”

Speaking to the New York Times David Granger, editor in chief of Esquire said he believed the application would benefit both the magazine and Barnes and Noble, “We’re hoping it will drive traffic to their stores and it will benefit both of us.”