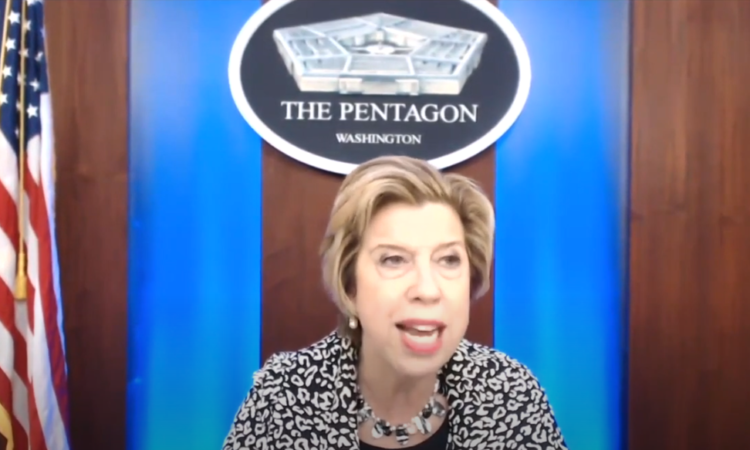 A Pentagon official announces that the Department of Defense has five American-made drones that are available for use by US law enforcement at the federal, state, and local levels.

Sixty percent of all aerial drones used by American state and local law enforcement agencies are made in China, and the Pentagon is extremely concerned that the data is being sent to the Chinese Communist Party.

“We are proud to announce the availability of the following five US-manufactured drones that provide trusted, secure, small UAS options to federal, state, and local governments” — Ellen Lord

The Heritage Foundation think tank held a virtual event on Thursday discussing “The Enemy Within: The Security Risks of US Law Enforcement’s Use of Chinese Drones,” declaring in the description that “Six of 10 aerial drones used by American state and local law enforcement agencies are Chinese-made.”

All Chinese companies must share their data with the Chinese Communist Party whenever prompted, and while most US law enforcement agencies use Chinese drones, there are privacy and security concerns that the data collected from the drones could go directly to the Chinese government.

“We are extremely concerned about data exfiltration from these Chinese UAS [Unmanned Aerial Systems],” said the Pentagon’s Under Secretary of Defense for Acquisition and Sustainment, Ellen Lord, in her keynote.

To help keep Chinese tech out of American law enforcement, Lord gave an update on the Pentagon’s “Blue sUAS” program — a culmination of 18 months of work by the Army and Defense Innovation Unit (DIU) — and she announced that the Pentagon finally has a list of five American drone manufacturers that state, local, and federal governments can use.

“Due to the work of the blue, small UAS program, we are proud to announce the availability of the following five US-manufactured drones that provide trusted, secure, small UAS options to federal, state, and local governments through the General Services Administration [GSA] catalog later this month,” Lord announced.

The five American-made drones and manufacturers include:

The Pentagon’s under secretary of defense for acquisition and sustainment encouraged law enforcement across the US to get in contact with the GSA to see how they could gain access to these drone manufacturers.

According to Lord, the sUAS program “represents a significant first step towards building a robust and trusted UAS domestic industrial base that really will ensure sustained delivery of highly capable, secure UAS to the war fighters that depend on it.

“Our blue, small UAS program is the culmination of 18 months of work by the Army and the Defense Innovation Unit [DIU] to tailor the best technology from US and allied companies to develop inexpensive, small UAS defined as Group 1 and 2 UAS, which are under 55 pounds for the war fighter,” she added.

In July, US Deputy Secretary of State Stephen Biegun testified that China “exports technological know-how that can help authoritarian governments track, reward, and punish citizens through a system of digital surveillance.”

“A key element of the PRC’s strategy is to provide political, technological, and economic support to those who are willing to turn a blind eye to the PRC’s lucrative deals at the expense of the citizens of developing nations, thereby enabling the rule of autocrats and kleptocrats globally,” he added.

With 60 percent of aerial drones used by US law enforcement being made in China, the Pentagon is taking steps to supply federal, state, and local governments with American-made drones.

Correction, September 21, 2020: A previous version of this story listed Parrot ANAFI as one of the drone manufacturers, and the story has been updated with the correct name — Parrot ANAFI USA.