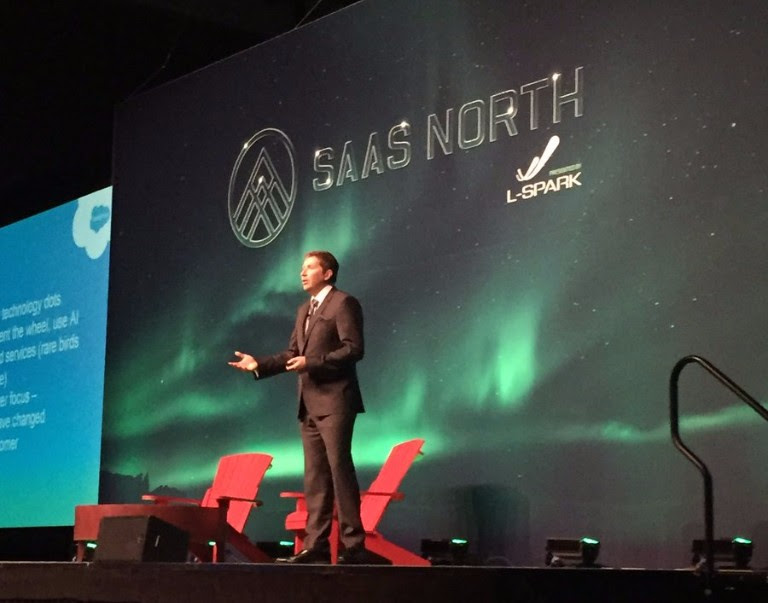 Expanding upon last year’s inaugural Software as a Service conference, SaaS North, this year’s installment will focus heavily on AI from November 29 – 30 at the Shaw Centre in Ottawa, Canada.

AI is making its mark on traditional SaaS solutions, and at SaaS North, AI will be a major focus of its 2017 program. Speakers and panelists will discuss how AI is really impacting SaaS and how SaaS pros can unlock the power of data that AI produces.

For the second year in a row, the L-Spark accelerator teamed up with CUBE Business Media to host the event, which drew over 60 distinguished speakers from the SaaS industry in 2016.

This year’s conference has grown in size and scale and organizers predict well over 1,000 attendees and the speaker list has grown to over 80 speakers. Notable SaaS leaders attending SaaS North will include:

SaaS North 2017 will be introducing a new format, including Ask Me Anything (AMA) panels where speakers from throughout each day will return to the stage to take questions from the audience, offering attendees a more in-depth learning experience.

Leo believes that Ottawa has now become a safe zone for SaaS startups. The experience of going through the tech boom of the 90s, coupled with a strong education system and good financial support, have all contributed to Ottawa’s resurgence.

Ottawa has always been a global tech player

As Ottawa is and always has been a global tech player, one of the most promising sectors to come out of the Canadian capital in the last couple of years has been SaaS.

This year shows that the inertia is in full momentum, and there has been some serious money invested in this emerging sector in Ottawa.

In January cloud business dashboard providers Klipfolio raised $12 million in Series B funding, and last month Klipfolio hired Jonathan Milne from Invest Ottawa to head up community and strategic partnerships within the company.

Invest Ottawa launched the Work in Ottawa campaign earlier this year aimed at both Americans and Canadians to live and work in Canada’s capital city. Although not specifically aimed at SaaS, some overlap would be expected and the responses were phenomenal!

Another win for Ottawa’s SaaS sector came in March with the $4 million raised by L-Spark  accelerator graduate FileFacets — a data analytics and content migration software platform.

But the funding train didn’t stop there in March for Ottawa’s SaaS companies.

In June, another L-Spark graduate Member365, raised $1 million to further expand its operations and to help clients manage their members and memberships services.

Why SaaS companies come to Ottawa

The emergence of Shopify in Ottawa is a good example of how the city’s previous experience in telecommunications primed it for success.  Shopify was founded by a group of young entrepreneurs, but their implementation teams come from the existing telecommunication industry.

Shopify’s growth rate is crazy right now, and its COO and SaaS North 2017 speaker Harley Finkelstein who had invested in over a dozen startups, was named Canadian Angel Investor of the Year 2016.

With that type of commitment into Ottawa’s tech ecosystem, the timing is perfect for tech talent to pack-up and move North.

Mr. Leo Lax points out that SaaS companies come to Ottawa for two reasons, “The buzz the city is making for tech and innovation, and primarily the wealth of experienced C-level individuals that have historically come from environments like the telecommunications industry.”

“Ottawa has been the birthplace and long-term home of global companies who dominate their respective categories,” says Lax. “It’s no wonder we are poised to be Canada’s capital of SaaS.”