HomeTechnologyWill AR, VR kill zoos or is it time for zoos to tech up?
Technology

Will AR, VR kill zoos or is it time for zoos to tech up? 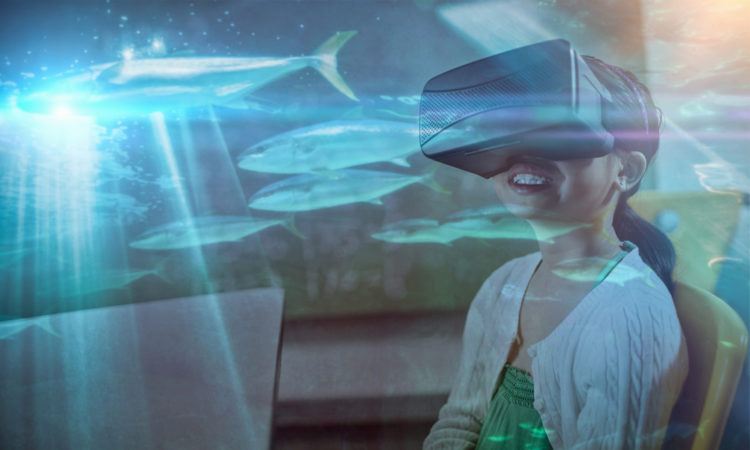 As immersive technology such as Augmented Reality (AR) and Virtual Reality (VR) bring viewer and viewee virtually closer to each other, will people still walk in to zoos to bond with animals? Everyone might not. What if zoos had this technology?

A company in UK announced the release of its new live-action Virtual Reality (VR) experience, Swimming with Humpbacks.

Immotion, which is a company with expertise in aquatic VR, is releasing the first instalment in its Blue Ocean Aquarium series.  The company created the experience with Jeff Hester, a prominent free-diving cinematographer, who recorded a pod of humpback whales in live action VR in the Kingdom of Tonga, while they were migrating from Antarctica during the mating season.

According to the company’s website, the recording captures virtually every move. Viewers can witness scenes such as a female giving birth and bonding with her calf, young whales playing, and a heat run.

Also, with the help of SonyVR, IOS mobile downloads, and Android, consumers will be able to enjoy this fantastic experience in the comfort of their home.

With such technology available at one’s fingertips, would people still travel to far off places to capture just a glimpse of such action? Is this technology then bringing zoos and aquariums to their end?

What if zoos themselves start using this technology instead of displaying real animals. It could be a more educational experience for visitors, while changing the lives of captive animals as well.

A major reason why we watch an animal in a cage is because we feel safe outside the cage knowing that the animal can never attack us. However, safety is an issue for both human bystanders and animals, as was proved by the Harambe incident. In May 2016, Cincinnati Zoo officials had to shoot a 17-year-old gorilla called Harambe to protect a child who’d fallen into the enclosure.

If we could see the animal roaming around freely, while knowing that it is safe for us to stand and stare, we would prefer that more than a cage.

For the Instant Gratification Generation

In this age of instant gratification, youngsters are not impressed by delay. They demand that their senses be bombarded with stimuli, whether it be colors in HD or sounds in Hi-res. Several industries, like gaming, music, and cinema, are already exploring these demands.

This demand sadly puts these youngsters off activities like visiting a zoo, museum, or a library. By that logic, the use of immersive tech can urge youngsters to renew their interest in zoos. Though one could argue that by providing this service, we further encourage this need for more instant gratification.

The youth of today are also opinionated when it comes to environmental issues like how many trees were cut to accommodate a zoo, or whether a caged animal is actually happy and cared for. This could be an opportunity for zoos to tech up, just like other industries.

Using virtual reality, a viewer can get a 360-degree view of a habitat, experiencing almost real sights and sounds. Smells might not be a part of this experience though.

Zoo literature, which often goes unread, could be imbibed into the display, ensuring more absorption of information. Every display will assuredly be educative, especially in the case of extinct species and endangered animals. Quizzes can be added too.

We are more aware of animal rights now. Dangers of keeping animals out of their natural habitat are well known. Animal rights activism can lead to bad business for zoos.

For example, animal-rights activists criticized the $3 million state-of-the-art elephant facility at Seattle’s Woodland Park Zoo, calling it inhumane and too small. After the death of an elephant in 2014, zoo officials had to close the popular exhibit.

David Towne, who once oversaw the Woodland Park Zoo told Time, “The animals-rights people have imposed their will on the elephants. I’m not sure that they aren’t going to move on to gorillas, then other primates, and then what?”

With immersive technology, zoos can still maintain their exhibit without causing distress to animals.

As awareness grows, zoos will have to spend more on not just caring but showing that they care, which means as costs grow, number of animals being housed will go down. For instance, a research article published in 2016 in PLOS ONE brought to light that lack of social connections and challenges of food gathering can affect mental states of elephants to the point that they might withhold reproduction.

Also, in 2011, the Association of Zoos and Aquariums (AZA) decreed that accredited zoos with elephants must have a minimum of three of the species and must employ a full-time elephant scientist on their staff. Not every zoo can afford to house elephants then.

Will it be Good for Zoos?

The biggest argument against AR\VR is that it might kill the culture of visiting zoos altogether. However, it might make sense for zoos to adopt this technology instead of letting it become competition. Zoos and animal conservation projects can even bring their wares outside their parks by offering a life-like virtual display of animals. Such initiatives might actually encourage more visitors to the zoo.

For example, last week, a habitat in Tampa for abandoned, abused, or orphaned cats called The Big Cat Rescue, is opening a virtual zoo at Westfield Citrus Park shopping center. Their aim is to let people learn about these cats while experiencing virtually, without actually exposing the vulnerable animals.

“Especially with the virtual reality, which is where we think this is all going to go, you feel you’re in the action,” Susan Bass, director of public relations at Big Cat Experience told Tampa Bay Inno.

“There are no bars separating you from the cat. It’s almost like you can touch the water bowl or pet the fur without sacrificing safety. And if you’ve been to sanctuary a lot of time they’re sleeping — it’s not a real educational experience and we think this will be much more educational.”

The power of immersive technologies is such that you could take an entire animal habitat or sections of a museum to a school, as a class full of young students stand awestruck. The up-close nature of the experience might prove more exciting than waiting on the other side of a cage to glimpse an animal that might be asleep at the moment.

Of course, watching an unreal animal cannot provide the bonding experience that could come from feeding a giraffe, while its tongue grazes your hand. In the end, the experience will only be virtual. Hence, there will always be those who prefer to chase the wind and enjoy the spray of salt on their face, while patiently waiting for some real action. However, there will be those who enjoy a virtual show.