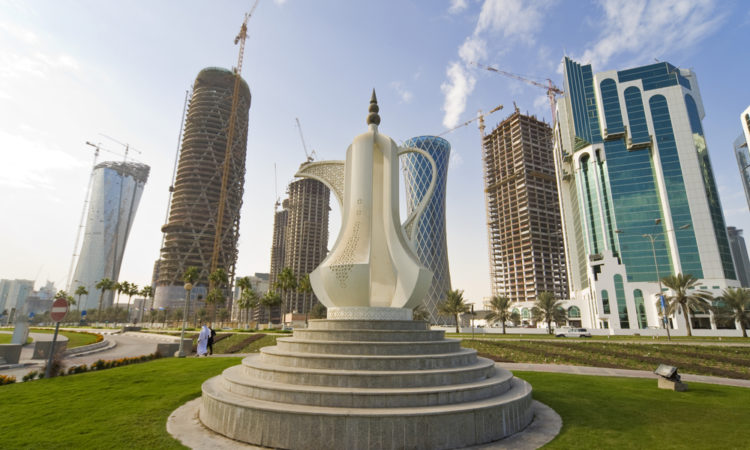 Launching a business in a new, unseen market like Qatar can be challenging, but with well-calculated ideas, such bold moves can spell success.

A startup called Urban Point has made Qatar the launch pad for its business, based only on market calculations and no familiarity.

The Sociable spoke to Susanna Ingalls, the Co-Founder of Urban Point, who also happens to be married to Urban Point’s other Co-Founder, Saif Qazi.

We asked Ingalls why the startup chose an unfamiliar market like Qatar to base their business. and whether or not that was a wise choice.

“It made sense to launch such an innovative idea in the Middle East, where the markets were growing rapidly”

“Saif and I agreed that it made sense to launch such an innovative idea in the Middle East, where the markets were growing rapidly. We chose Qatar over Dubai, because it was a smaller ecosystem that would make it easier to gain traction and pivot faster,” she says.

The Country Risk Quarterly says that today’s global risk environment is not going away anytime soon. What with trade wars and protectionism, the investment climate has become volatile. However, every exporter in the world has to deal with these challenges.

While no one can target everyone, small companies can effectively compete with large organizations by targeting a niche market. Urban Point specifically chose Qatar for its business, using calculations for its test market.

Risks and Rewards in Qatar

Neither Ingalls nor her husband had visited Qatar before deciding on the project, a fact that posed several risks. Still, the couple decided to go ahead with their plans.

They found a local partner — the father of an MBA classmate — which reduced the risk and made them comfortable to move.

However, challenges of a new unknown market still posed problems.

“As we were looking to disrupt an industry, we found that existing players were threatened by us and actually tried to shut us down. That is where our local partner stepped in to help us in the face of competitor attacks.”

Ingalls feels shifting base to a completely new market has given them new perspectives on their business, which they would likely never have got if they had chosen a safe and tested market near home.

“It was a great decision to come here. It has been challenging and we have learned so much. We have developed professionally in ways that we necessarily would not have in a highly specialized market, where you’re stuck in silos and not given the chance to get a broader understanding of business,” she says.

Read More: How 2 entrepreneurs saw a gap in the IoT market, and seized the opportunity

Ingalls herself, for example, has handled sales, marketing, HR, finance and accounting, investor relations, pitching, operations management, and crisis management. She says the experience has been an adventure and greatly rewarding.

The result has been success for Urban Point in the last three years. In 2016, Entrepreneur awarded Urban Point the Mobile App of the Year for its innovative business model and international expansion prospects.

In 2017, the World Economic Forum selected Urban Point as one of the top MENA-region startups of the year as well as a successful example of collaborative innovation in the 4th Industrial Revolution.

In 2018, Al Jazeera released a documentary (in Arabic) about Urban Point being the only Qatari startup selected for the regional entrepreneurship series that year. They also won Seedstars Qatar that year as the best scale-up in the country.

And this year, the startup was selected into the top 12 finalists for the 2019 Seedstars prize in Lausanne, Switzerland.

With excellent Ramadan offers this year, Urban Point has again swept across the market. The app offered customers a meal for two at the price of one in some of Doha’s best restaurants like Royal Tandoor, Zaffran Dining Experience, and Wafi Gourmet.

Differences Between Qatar and Other Markets

The attention Qatar’s government has shown towards human capital has not gone unnoticed. The government has also shown inclination to provide knowledge and education through renowned universities located in Qatar Foundation’s Education City.

The country is also encouraging and supporting youth from various organizations, such as Enterprise Qatar, Qatar Business Incubation Center, Qatar Science and Technology Park (QSTP) and ICT’s Digital Incubation Center, to be inventive and entrepreneurial so that they can convert initial ideas into productive projects.

“We have developed professionally in ways we would not have in a highly specialized market, where you’re stuck in silos and not given the chance to get a broader understanding of business”

Comparing Qatar to other Gulf markets, Ingalls says that Qatar is more socially progressive, while still balancing its traditions.

“It is moderate in that it is conservative, but still progressive in that it has brought in excellent educational institutions in Education City, an area of top US universities including Carnegie Mellon University, Virginia Commonwealth University, and Texas A&M (Agricultural and Mechanical College).

Many young people are choosing Qatar as a potential career starting place. Qatar is known for its excellent education facilities and has also ranked the best country in the world for starting a career. Ingall’s sister-in-law, for example, attends Georgetown in Qatar, seeking a bright career in the future.

Zeroing in on a particular market allows more focus on building a brand message. This can prove to be a much more efficient and effective way to build a potential clientele and generate business.

However, while seeking the optimum market, thinking out of the box can reveal novel areas for entrepreneurs. There can be unexplored markets just waiting to be disrupted.

What Urban Point Does

In Qatar, Urban Point works with telecom companies to enhance their customer retention and engagement. At the same time, the startup connects customers and small businesses using mobile-based incentives to drive the right type of customer profile to their different merchant partners.

All of this is done on the Urban Point mobile app, which connects all three of their clients, the telecom, end users, and small businesses, on one platform.

Ingalls, who is from Baltimore, and her husband, who is a Pakistani brought up in Saudi Arabia, saw a problem and decided to provide a solution in the form of a business.

“Saif and I met during our MBA in Mannheim, Germany, and developed a business plan for the Middle East. We saw the problem that telcos were facing. They were losing money because of free messaging apps like WhatsApp,” she says.

“We thought that by combining the discounts and telco industries, we would create new value and make it easier for all three stakeholders to engage on one platform, while leveraging telco data and distribution channels,” Ingalls explains.