The San Juan-based accelerator is now accepting applications for its ninth cohort of international startups. Businesses with a global vision who have gained enough traction to begin scaling can submit their interest until May 10. 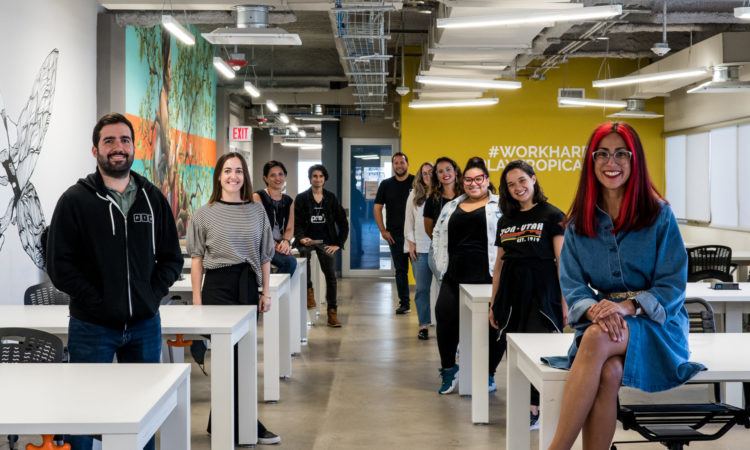 Island life often conjures up imagery of sandy beaches, the scent of the ocean, palm trees, long soaks in the sun, and pineapple and coconut-flavored ice drinks.

But Eduardo Padial Álvarez, operations director at the parallel18 startup accelerator, believes there is much more to an island experience than meets the eye—at least in Puerto Rico.

“Don’t think that Puerto Rico is just for sipping piña colada,” says Eduardo, who is working passionately to promote the Caribbean archipelago as a unique technological innovation hub and a launch pad to the North American market and beyond—especially for founders from Latin America and the Caribbean.

He explained that the name parallel18 was inspired by the 18th parallel north—a circle of latitude that is 18 degrees north of the Earth’s equatorial plane and crosses Africa, Asia, the Indian Ocean, the Pacific Ocean, Central America, the Caribbean, and the Atlantic Ocean.

Embracing the motto of “Work Hard, Play Tropical”, the performance-driven program is focused on providing funding, mentorship, business connections, and investment to underrepresented founders from around the globe.

The pre18 project is a local pre-acceleration program focused on innovative, early-stage Puerto Rican startups that have global ambitions and potential, while P18 welcomes relatively mature companies with different nationalities and helps them scale to global markets.

Since its launch in late 2015, the accelerator has received over 4,000 applications from a wide variety of countries. A total of 211 companies have completed the program, having collectively raised $126 million in investment and generated $189 million in revenue.

In an interview with The Sociable, Eduardo said an equity-free funding of $40,000 is available for participants and they are offered access to an exemplary network of more than 100 mentors, who share their knowledge through group and one-on-one meetings.

“We invite experts from other ecosystems to inject their mentality into our ecosystem so that we can have a global perspective,” he added.

Another advantage of taking part in the community-focused program is access to P18Connect, which connects startups with large corporations and encourages mutually beneficial business partnerships.

According to parallel18, more than 200 unique interactions have been set up through P18Connect, and 32% of their alumni are still in contact with the leads introduced by the program.

In addition, startups who graduate from the P18 program and raise private capital could be eligible for a follow-on fund of up to $75,000 managed by P18Ventures, who has invested in 48 alumni so far.

The accelerator is now accepting applications for its ninth cohort of international startups. Businesses with a global vision who have gained enough traction to begin scaling can submit their interest until May 10 to be part of the 20-week, hybrid program.

Eduardo says the program has contributed greatly to the economy of Puerto Rico and has helped make its industries more competitive as 65% of the participating foreign companies maintain operations on the island. The program also boasts a startup survival rate of 85%.

“When we ask entrepreneurs to come to the island, we facilitate their access to local talent, investment, and client—which is basically the most important aspect of any business—to help them grow from here.”

The operations director at parallel18 said the unique characteristic of Puerto Rico as an unincorporated territory of the United States enriched with Hispanic and Latino culture as well as its tax incentives and well-developed infrastructure make it an ideal place for startups to begin their scale-up journey.

“So the good news is that the road is already established and the roadmap is already there. We have a competent and highly educated pool of local talent, a thriving research and development sector, and great infrastructure, including top universities that have incorporated entrepreneurial mindset in their curriculums. We just need more entrepreneurs along the way.”

Eduardo cited re:3D and BrainHi as examples of startups in the parallel18 community who “truly demonstrate where we’re as an ecosystem”.

re:3D is a social enterprise on a mission to cut cost and scaling barriers to 3D printing with the aim of creating jobs and enabling problem-solvers worldwide to independently address local needs.

BrainHi harnesses the power of artificial intelligence to “give superpowers to local businesses” with a platform that acts as an extension of their front-desk staff. It streamlines their operations through rescuing their missed calls and helping them be available 24/7 to answer client’s questions, process orders, and book appointments.

Eduardo says BrainHi was the first company founded and based in Puerto Rico to be chosen for the prestigious YCombinator program, an American seed money startup accelerator that has invested in thousands of companies such as Stripe, Airbnb, Cruise Automation, DoorDash, Coinbase, Instacart, Dropbox, Twitch, and Reddit.

Eduardo argues that the fairly small market in Puerto Rico “forces” aspirant entrepreneurs to build a business model and a solution that can achieve global impact.

At the same time, he says, they can experience a healthier work-life balance in a region that is home to El Yunque National Forest—the only tropical rainforest in the U.S. National Forest System and the U.S. Forest Service.

The operations director at parallel18 added that hurricanes, earthquakes, and, most recently, the coronavirus pandemic have tested the resiliency of Puerto Rico and it has stepped up to the challenge every single time.

“We’re tough. We have the determination. We don’t quit. We are united. We can overcome everything. And this resiliency is embedded in globally ambitious entrepreneurs who put down some roots here,” Eduardo said.