Should the Advanced Research Projects Agency for Health (ARPA-H) be an independent agency under Human Health Services (HHS) or part of the National Institutes of Health (NIH)?

Today, the House Energy and Commerce Subcommittee on Health held a hearing on “ARPA-H: The Next Frontier of Biomedical Research,” in which various expert witnesses testified how and where the new agency should be established.

Modelled after DARPA, “ARPA-H will be tasked with building high-risk, high-reward capabilities (or platforms) to drive biomedical breakthroughs—ranging from molecular to societal—that would provide transformative solutions for all patients,” according to the NIH website.

Sounds great coming from the federal government, but as journalist and researcher Whitney Webb wrote in Unlimited Hangout in May, 2021:

“If ARPA-H/HARPA is approved by Congress and ultimately established, it will be used to resurrect dangerous and long-standing agendas of the national-security state and its Silicon Valley contractors, creating a ‘digital dictatorship’ that threatens human freedom, human society, and potentially the very definition of what it means to be human” — Whitney Webb, Unlimited Hangout, May, 2021

The big issue before Congress today was not about how ARPA-H could create a “digital dictatorship” that can monitor and surveil everyone’s health data in real-time through wearable, implantable, or consumable devices connected to the Internet of Bodies.

Nor did they discuss how, in Webb’s words, “The proposed agency would merge ‘national security’ with ‘health security’ in such as way as to use both physical and mental health ‘warning signs’ to prevent outbreaks of disease or violence before they occur,” which, according to Webb, “is a recipe for a technocratic ‘pre-crime’ organization with the potential to criminalize both mental and physical illness as well as ‘wrongthink.'”

Not addressing any of that, the big issue before Congress today was who should be in charge of ARPA-H and what that would look like.

“Regardless of agency placement, the Administration’s proposal emphasizes that ARPA-H be designed to foster a distinct culture, organization, authority, and leadership separate from any existing NIH institute” — Frank Pallone

The White House placed ARPA-H within the NIH budget for 2022, but the NIH has come under criticism for its slow bureaucracy, lack of accountability, and questionable leadership.

Chairman Frank Pallone stated in the ARPA-H hearing briefing memo that, “Regardless of agency placement, the Administration’s proposal emphasizes that ARPA-H be designed to foster a distinct culture, organization, authority, and leadership separate from any existing NIH institute.”

Testifying in today’s hearing were:

Three witnesses were in favor of ARPA-H being an independent agency, one believed it should be part of the NIH, and one was on the fence.

Former Director of the White House Office of Science and Technology Policy Dr. Eric Lander was slated to testify in today’s hearing, but he abruptly resigned from his post last night after being called out for mistreating subordinates throughout his career.

Dr. Lander’s written testimony, which was deleted from the hearing record, can be found here: Witness Testimony Lander. 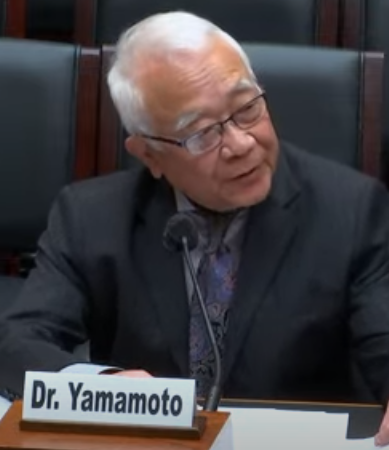 “ARPA-H should be authorized as a free-standing agency within HHS, rather than as a component of NIH” — Dr. Keith Yamamoto

Dr. Yamamoto, whose research has benefited from NIH funding, said the NIH was highly successful at discovering knowledge, but it wouldn’t be able to achieve the breakthrough applications that ARPA-H needs.

“Congress would be wise to recognize that ARPA-H’s success will depend upon its creation of a structure, culture, operating model and practices that differ dramatically from NIH, enabling it to take and overcome risks, to achieve breakthrough applications, rather than discovery, of knowledge,” Dr. Yamamoto testified.

“ARPA-H should be authorized as a free-standing agency within HHS, rather than as a component of NIH,” he added.

Dr. Yamamoto explained in his written testimony, “Dr. Dugan’s intent here was not to denigrate ‘conventional wisdom,’ but rather to underscore that creating a new culture and operating model is difficult, but that developing a new culture within an existing, very different and highly established one may be impossible.” 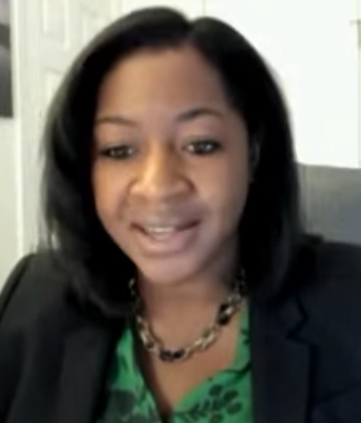 In her testimony, Esther Krofah argued that ARPA-H could indeed be housed within the NIH while still fostering a different culture and operating model, using ARPA-E (Energy) as a prime example of a DARPA-like agency operating within a larger federal agency — the Department of Energy.

“Critics of placing ARPA-H within NIH argue that the traditional leadership and culture will not allow for independence and autonomy,” Krofah testified.

“We have seen with ARPA-E that an entity like this can exist within a larger federal agency and still foster a different culture and operating model, with the right toolkit and key ingredients.

“As such, we do not believe this is as critical a threshold question as others might,” she added.

For Krofah, ARPA-H’s leadership, activities, and funding take precedence over its location. 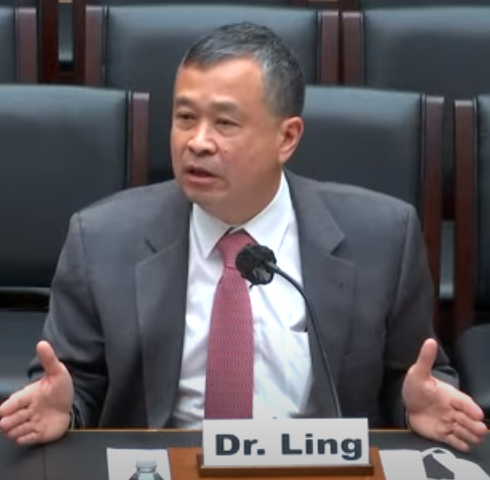 ARPA-H “needs to be independent because you need people there who are going to have the determination, have the drive, have the urgency to get the job done end-to-end!” — Dr. Geoffrey Ling

Dr. Ling, a retired military officer who worked at both DARPA and the NIH, testified that ARPA-H should be independent and not part of the NIH.

“ARPA-H must be an independent agency within the HHS,” said Dr. Ling.

“It should be independent. It needs to be independent because you need people there who are going to have the determination, have the drive, have the urgency to get the job done end-to-end!” he added.

In his written testimony, Dr. Ling posited that ARPA-H “must have a reporting structure separate and distinct from the NIH and other agencies.

“It must have a budget clearly identified and codified into law as separate and distinct from the NIH and the other agencies.

“Oversight of ARPA-H should come from Congress and not the NIH or any of the other agencies.

“ARPA-H leadership should hold Director status, with the same rank as the FDA, CDC, CMS, and NIH leaders.” 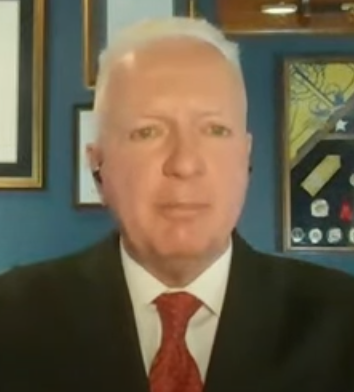 Admiral Brett Giroir, who also worked at DARPA as the former Director of the Defense Sciences Office, told the committee that he believed putting ARPA-H within the NIH “would be a fatal mistake.”

“I believe that it would be a fatal mistake to organize ARPA-H within the NIH,” he said.

“To a great degree, we need ARPA-H because the NIH cannot maintain a culture of radical innovation, disciplined execution, specific accountability, and streamlined processes that are essential for ARPA-H.”

“I strongly support that the DARPA-H be independent of the NIH and that the director report directly to the secretary of Health and Human Services,” Giroir added.

Admiral Giroir summed-up his reasoning by quoting a DARPA internal quip in his written statement that goes:

“An NIH program officer approaches a barn, opens the door, sees that the barn is 6 feet deep in horse manure, is horrified by the smell, screams in disgust, and runs away from the barn.

“A DARPA program manager opens the same door, sees and smells the same manure, but immediately asks the question, where is the pony?” 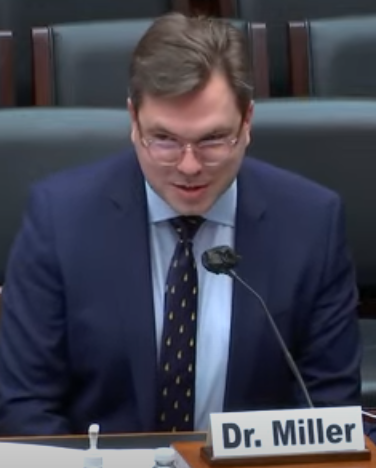 “Let’s look to change part of the NIH and the extramural grant program into ARPA-H” — Dr. Brian Miller

In Dr. Brian Miller’s written testimony, the term “NIH” appears 53 times, and he is in favor of ARPA-H being part of the NIH.

“As proposed, ARPA-H is to exist as an off-site arm of the NIH,” he wrote, adding, “with geographic distance, term limits for the director (5 years) and program managers (3-5 years), and direct oversight of grant administration as ameliorating tactics.”

In his opening statement, Dr. Miller praised the NIH’s $31 billion extramural grant program, and said that it should be modified for greater accountability and incorporated into ARPA-H.

“Let’s look to change part of the NIH and the extramural grant program into ARPA-H,” he said.

“Let’s have transparency and accountability for indirect costs.

According to the 2021 NIH ARPA-H Mission Concept, “A proposed mission of ARPA-H could be to make pivotal investments in break-through technologies and broadly applicable platforms, capabilities, resources, and solutions that have the potential to transform important areas of medicine and health for the benefit of all patients and that cannot readily be accomplished through traditional research or commercial activity.” 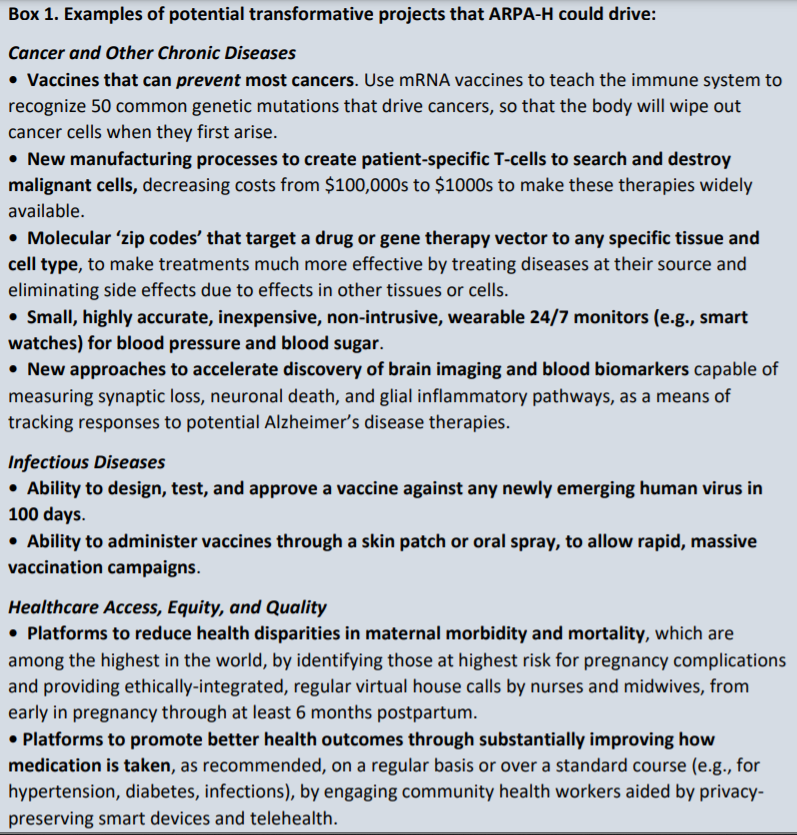 “ARPA-H will need exemptions from traditional proposal review processes, which work well for much of the biomedical research ecosystem, but can take 18 months or more to get from idea to workshop to concept clearance to funding announcement to application to first, and second level scientific review before the actual work even begins,” according to the White House Fact Sheet.