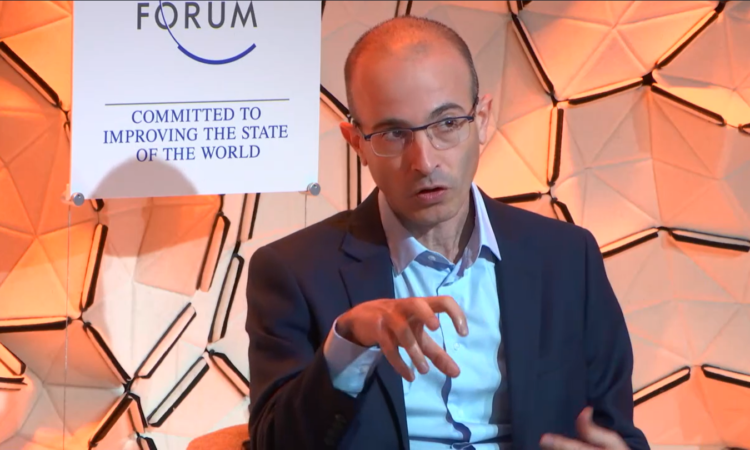 The tech arms race between the US and China will soon give corporations and governments the ability to hack human beings, and the loser will be humanity itself, says noted historian Yuval Harari at the World Economic Forum.

Juxtaposed alongside the CEO of Huawei — a company that has been blacklisted by the US government — Harari warned the Davos crowd that a future shaped by a technological arms race could represent an upheaval in society with humanity and political systems being the stakes.

“I understand the current arms race as an imperial arms race, which may lead very soon to the creation of data colonies. You don’t need to send the soldiers in if you have all the data,” said Harari.

“But on a much broader and deeper perspective I think it’s really going to shape the future of humanity and the future of life itself because the new technologies will soon give some corporations and governments the ability to hack human beings.

“To hack human beings you need a lot of biological knowledge, a lot of computing power, and especially a lot of data”

“There is a lot of talk about hacking computers, smartphones, emails, bank accounts, but the really big thing is hacking human beings.

“And once you reach that point, and we are very close to that point […] and we have no idea what happens once we pass that point,” the historian added.

When you think about how big tech companies like Google are looking to conquer the healthcare industry, what is it that these companies are gaining access to?

“They can predict and manipulate my decisions better than me”

Google’s Project Nightingale looks like a prime example of a program that involves gaining biological knowledge of millions of Americans while the tech giant’s computing power can crunch all the data.

Harari may speak of a technological arms race between countries like China and the US, but perhaps the greatest potential threat to the future of humanity is sitting cozy in Silicon Valley.

That which can be hacked can also be reprogrammed, including humans.

“Are we at the point where Huawei or Facebook or the government or whoever, can systematically hack millions of people — meaning they know about my medical condition, about my personal weaknesses, about my life history?” Harari asked.

Harari added, “The outcome of the arms race is really going to shape how everybody on the planet is going to live in 20 to 50 years — humans, other animals, new kinds of entities.”

What new kinds of entities is he talking about? The integration of humans and machines — cyborgs — in a word. And once we have AI-human cyborgs all bets are off. Who really calls the shots in these situations, the human or the machine — or the institutions behind the machine? Who’s really in control?

At the WEF in 2018, Harari said he believed that “earth will be dominated by entities that are more different than us than we are different from neanderthals or from chimpanzees.”