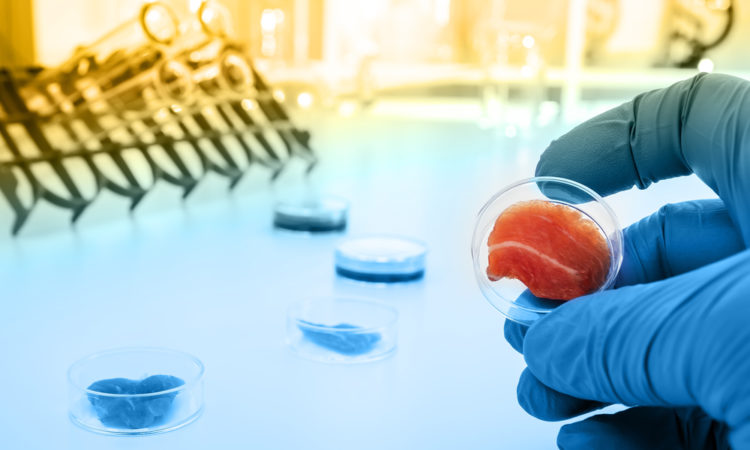 The first industrial cultured meat facility is born from a startup coming out of a bioengineering lab that also innovates drug development for the pharmaceutical industry and researches medical device technologies.

Israeli-based Future Meat Technologies opened the first industrial cultured meat facility in June, with the goal of having its lab-grown meat reach US shelves by 2022.

“Our goal is to make cultured meat affordable for everyone, while ensuring we produce delicious food that is both healthy and sustainable, helping to secure the future of coming generations” — Yaakov Nahmias, Founder and CSO, Future Meat Technologies

At a rate that’s “about 20 times faster than traditional agriculture,” the new lab-grown meat facility is expected to produce 500 kilograms of product per day — equivalent to 5,000 hamburgers-worth of protein — through a process that “creates lines of animal cells that grow forever without any genetic modifications.”

Founded in 2018 and backed by America’s largest meat producer, Tyson Foods, Future Meat is one of a handful of startups spawned from the groundbreaking research of Founder and Chief Scientific Officer Yaakov Nahmias.

Tissue Dynamics, another startup that Nahmias founded in 2017, seeks “to disrupt drug development processes” by “providing groundbreaking drug toxicity and efficacy tools for the pharmaceutical industry.”

Both startups are spinoffs from Nahmias’s bioengineering lab at the Hebrew University of Jerusalem, which specializes in nanotech (microfluidic chips) and tissue engineering for innovating cultured meat, drug development, and medical devices.

Apart from being the founder and chief scientist at both Future Meat Technologies and Tissue Dynamics, Nahmias is also the Founding Director of the Alexander Grass Center for Bioengineering, which has produced multiple spinoff startups.

The lab is “a multidisciplinary research center with over $25 million in independent research projects ranging from nanotechnology-based diagnostics and innovative medical devices to advanced computational models and microchip alternatives for animal testing.”

Spinoff startups coming from the Alexander Grass Center include:

With this research, “Applications range from faster drug development and personalized medicine, to animal-free toxicity studies, and cultured meat.”

So, here we see the research coming from one lab spinning off into two directions — drug development (Tissue Dynamics) and lab-grown meat (Future Meat Technologies) — both inspired by similar technological concepts and techniques.

Nahmias is also the founder of another cultivated meat startup based in Tel Aviv called SuperMeat.

Founded in 2016, SuperMeat specializes in cultured chicken products, and its production is done on a much smaller scale than the newly-opened Future Meats facility.

From co-cultured micro-livers to lab-grown meat

Going backwards in time, in 2009 Nahmias was awarded a patent that “became the core technology for HµREL, the first human-on-chip company on the market aiming to replace animal experiments in drug development.”

In his CV, Nahmias describes how he found his calling at the intersection of bioengineering and nanotech.

“My interests in nanotechnology and liver tissue engineering intersected early in my career when I co-edited a book with Prof. [Sangeeta] Bhatia titled ‘Microdevices in Biology and Medicine,'” he wrote.

Published in 2009, “Microdevices in Biology and Medicine” explores how “microscale patterns, three-dimensional features, and the physics of small places offer a unique ability to control the microenvironment providing innovative tools for the study, diagnosis and treatment of disease.”

Fast forward to today and microfluidic chips are a key component of Tissue Dynamics’s core technological offering — one that “permits the real time assessment of metabolic function.”

According to Piedmont CMG, “Microfluidic chips, sometimes referred to as Lab-on-a-Chip technology, are extremely small devices that can integrate multiple flows and functions in a microfluidics process. They can be as small as a few centimeters yet can accomplish high throughput in screening or testing.”

In medicine and biology, the concept of organs-on-a-chip is gaining in popularity for several reasons. One is that they can help bypass the need for testing treatments on animals.

Other advantages of organs-on-a-chip include their “reduced costs, small dimensions that make them easily transportable, reduced experimental times, and the ability to perform in vitro experiments with a better control over the parameters,” according to Biomedical Engineering International.

With his liver-on-chip microdevice, Nahmias was able to identify a mechanism of acetaminophen, the active ingredient in Tylenol, that “may underlie its idiopathic kidney toxicity.”

He also “developed a genetic switch that allowed us to expand human liver cells without losing metabolic function,” along with “a cell library commercialized by Upcyte Technologies.”

Upcyte’s cells are of human origin, and they are used for research, screening, and drug development.

Coming from one lab, the innovation behind growing co-cultured human liver cells was applied to growing cultured meat in a lab, with multiple commercial applications used by various companies.

But Nahmias’s contributions to biotech don’t stop there.

He also made a “groundbreaking discovery of the use of medication to combat the global pandemic.”

Together with Mount Sinai Hospital Professor Benjamin Tanover, Nahmias’s research in July, 2020 led to a breakthrough discovery surrounding the coronavirus, which helped explain why people with high blood sugar and high cholesterol were more vulnerable to COVID-19.

“Our data indicate that [improper] fat accumulation may establish critical aspects of COVID-19 development. This is a breakthrough that opens up possibilities to neutralize the action of the virus through targeting the host tissue activity that allows it to develop a substrate,” he added.

The report goes on to say that “Nahmias’ robotic scanning system showed that lung cells infected with the virus consumed more carbohydrates, such as glucose, which are needed for the rapid distribution of the virus, and formed fats that accumulated in the lung tissue.

“These findings explain why high blood sugar (hyperglycemia) and high cholesterol (dyslipidemia) are a major risk factor for corona, even in the absence of diabetes.”

Whether it’s disrupting drug development processes, cracking the corona code, or creating cultured meats in a lab, Nahmias continues to be at the forefront of many scientific breakthroughs with significant real-world impact.