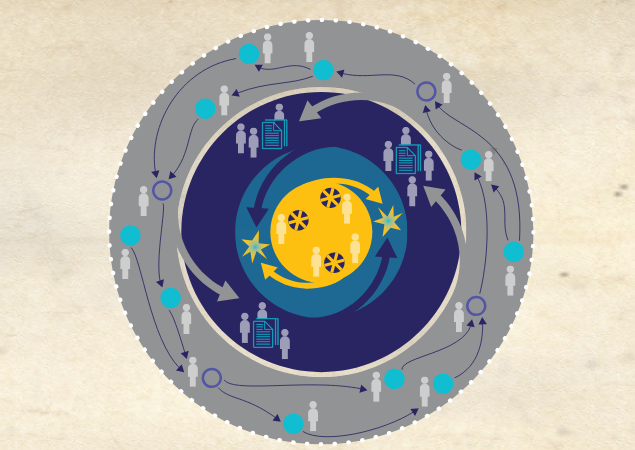 Today, DARPA launched the addition of four new incubators on the Polyplexus portal, raising the total to 16 since its inception, with eight being active.

Launched in March, 2019 the Defense Advanced Research Projects Agency‘s (DARPA) Polyplexus portal is an online, professional, technical conversation between the research community and DARPA Program Managers that will lead to the opportunity to submit abstracts and full proposals for a research and development project.

Think of DARPA’s incubators not in the traditional startup incubator sense, but as incubators of ideas through conversations that lead to a final proposal.

All technology can be used for good or ill. The Cognitive Dissonance Detection Incubator sounds like something that could do a lot of good to prevent conflicts or clashes between communities, but I’m always skeptical that these types of projects could also be used to manipulate human behavior.

Of particular interest is how repeated and recursive cycles of confrontation and resolution shift belief and/or actions over time – weeks, months or even years. What are clever ways we can study this?

The Cognitive Dissonance Detection Incubator will be headed by Dr. Bartlett Russell who manages the “Gamifying the Search for Strategic Surprise” program at DARPA.

“I’m excited by the potential of Polyplexus to bring DARPA a greater diversity of performers, to mature ideas more quickly, and to develop interesting cross-disciplinary connections. I invite researchers to explore the many DARPA funding opportunities currently on the platform,” said Dr. Russell in a statement.

Quantum computing is a fascinating subject, and it is in its very early days. According to Caltech theoretical physicist John Preskill, “A quantum computer would be able to efficiently simulate any process that occurs in Nature.”

The Quantum Bio-Computing Incubator will explore whether some biological phenomena manifest and exploit quantum entanglement.

“If there is a distributed or non-local role for entanglement in, for example, robust fault tolerant information transfer in DNA replication, a deeper understanding could impact not only our appreciation of biology and medicine, but also could advance quantum computing and neural interfaces to computers using molecular electronics,” the incubator description reads.

The Quantum Bio-Computing Incubator will be headed by Dr. Michael Fiddy who manages a number of programs at DARPA including, but not limited to, ‘RadioBio’ and ‘Fundamental Limits of Photon Detection.’

“It’s great to have this innovative platform that allows me to connect directly with the broader creative, scientific community and accelerate innovation in this area,” said Dr. Fiddy in a statement.

The Hardware Trojan Identification Incubator will look to breed a new type of cybersecurity mechanism that “can be inspired by biology, mimicking the human immune system.”

Scientists are realizing that nature provides the best models for design and efficiency. I would argue that nature is intelligent.

According to the incubator description, “The human immune system protects the body from pathogens, like germs, viruses and other potentially harmful foreign bodies. If we become infected, our immune system is able to identify and attack the threat in an attempt to keep the body healthy.”

“When an SoC (System on Chip) is at risk of being attacked, this facility should identify and eliminate the threat. It’s essentially an attempt to investigate immune system strategies for SoCs.”

The Hardware Trojan Identification Incubator will be headed by Serge Leef who manages the ‘Supply Chain Hardware Integrity for Electronics Defense’ program at DARPA.

“I’m looking forward to seeing the ideas that Plexors put forth. It will be all the more the interesting if the Evidence and Conjectures come from an array of disciplines,” Leef said in a statement.

DARPA anticipates making up to five awards of up to $20,000 each and up to six months duration as a result of this process.

According to the Rethink Physics Modeling Incubator descprition: “The degree of complexity of systems and the number of physical phenomena that are important to characterize their behavior are both increasing.

“We are rapidly approaching the time when current approaches to modeling and simulation – i.e., arduous conversion of symbolic differential equations into computable algebraic form and then combining the physics by synchronizing the computations and data transfer across meshes with millions to billions of elements – will make accurate simulations problematic and untimely.

“Are there mathematical approaches to describe physics in a way that these representations can be converted directly into accurate, computable forms with methods that can be automated?”

The Rethink Physics Modeling Incubator will be headed by Dr. Jan Vandenbrande who manages a number of programs at DARPA including, but not limited to, ‘Open Manufacturing’, ‘Enabling Quantification of Uncertainty in Physical Systems’, and ‘Fundamental Design’.

“It’s a great opportunity – to engage with a network of researchers as they share emerging science, see how the ideas evolve, and take part in the conversation,” said Dr. Vandenbrande in a statement.

DARPA Defense Sciences Office intends to make at least one award of up to $100,000 and one year duration as a result of this process. In addition, the information gathered in the incubator may serve as the basis for a future program.

These funding opportunities are capped at a maximum of $100,000 each. They will roll out at a pace of approximately two per month.

An open, public platform, Polyplexus is currently in alpha with founding sponsor DARPA.