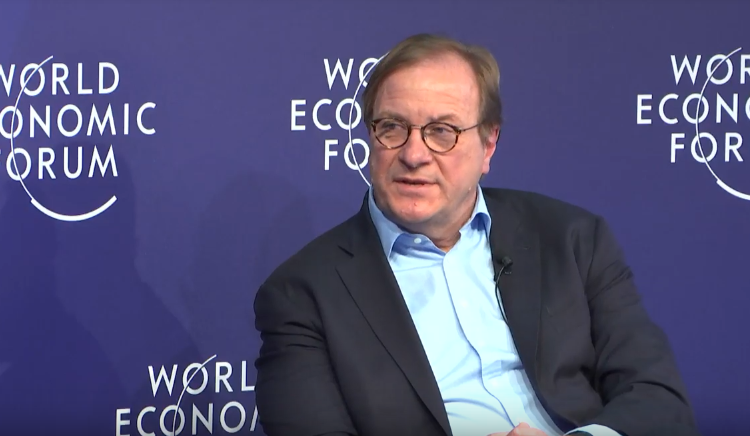 Speaking at the 2019 World Economic Forum (WEF) in Davos, Switzerland, Atlantic Council CEO Frederick Kempe says that the blurring and fusion of physical, digital, and biological tech in the tech arms race with China is “reaching an inflection point” that will determine the future of global politics and the global economy.

“This fusion of tech breakthroughs blurring lines of the physical, digital, and biological space is reaching an inflection point that makes it already clear that they will usher in a revolution”

Kempe began his talk at the WEF in Davos by posing a question set forth by Former US Foreign National Security Advisor Stephen Hadley, “Can the incumbent US and the insurgent China become strategic collaborators and strategic competitors in this tech space at the same time?”

His words echo those of many in the US defense and intelligence communities who see China as the biggest competitor in the space of artificial intelligence, including the fusion of machines with humans.

Kempe then presented three framing arguments to jump-start a conversation on the technological arms race between China and the United States.

“The nature of this emerging technological contest may favor the insurgent China rather than the incumbent United States, so it’s time to think harder about what that means,” said Kempe.

“The next step — the integration of humans and machines”

Speaking at the Association of the United States Army annual meeting on October 8, 2018, Defense Intelligence Agency (DIA) Director Lieutenant General Robert P. Ashley, Jr. said that one of the biggest decisions that the United States military will have to make is how to deal with the “integration of humans and machines” that China is pursuing.

“China is progressively pursuing a 2025 strategy where they want to be the main driver of AI, not only for their economic but for their industrial transformation,” said Ashley.

“Another key area,” Ashley continued, “human performance enhancement. So, for China, three phases. It started with the digital age; it’s moving into Artificial Intelligence with neural networks, and then the next step — the integration of humans and machines.

“Cognitive advances not just in how we think, but think about stamina and the individual soldier. The ability to think through problems. Think about the ethical impact of those kinds of technologies and how they would be applied. And how does a democracy view those kinds of technologies? How will Russia and China leverage those, and the hard decisions that we will have to make to keep pace?”

In a streamed interview during the Washington Post‘s Transformers: Defense Summit on December 6, 2018, foreign affairs columnist David Ignatius asked General Dunford about how the US can maintain a competitive advantage over China when it came to AI.

“How do you see AI transforming your business of military power and whether you worry that we’re not doing enough, given its apparent importance to get our focus on meeting this Chinese challenge?” Ignatius asked.