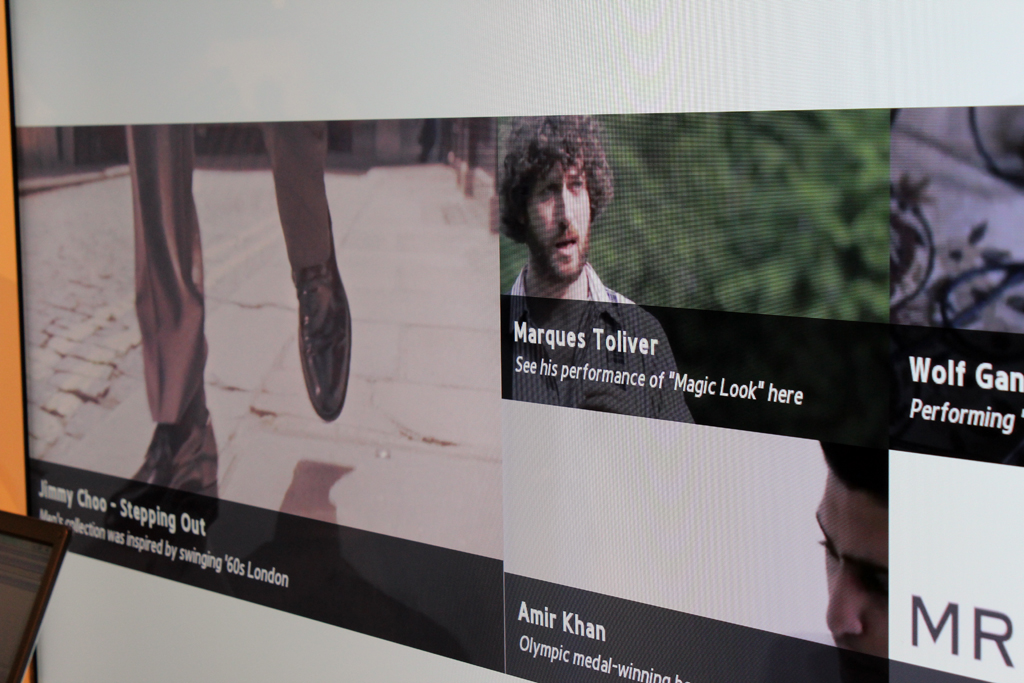 When we caught up with Big Motive today at the Dublin Web Summit they had a Big Problem.  Some 4,000 attendees had connected over 8,000 devices to the event’s Wi-Fi causing one hell of a challenge in connecting.

For Big Motive, the Northern Irish company that plans on turning your smart TV into a smart shopping app, this wasn’t ideal but, then again, it wasn’t a disaster.

“Smart TVs don’t have a lot of memory, so you need a data connection to provide the content that users’ demand,” Stephen Shaw, Big Motive’s UX Director explained, “so, at the moment we’re basically hacking together a local version of the TV app.”

With that, the Samsung Smart TV behind us flashed white as a standard Web 2.0 loading wheel spun on screen.  One of Big Motive’s technical gurus had connected one of the two nearby laptops to the TV.  A second later Big Motive’s (@big_motive |Facebook) Motivision app appeared on screen as code scrolled down the adjacent laptop screen.  A Windows 8 Metro-style interface appeared on the TV showing images, videos, and other dynamic content.

Stephen produced a Samsung Galaxy III, opening up the Motovision app and, with it, controlled the TV’s on-screen display.

“A combination of Bluetooth, node.js, and some clever coding,” replies Stephen when we asked him how they got it working today without a data connection.

Having recreated their  app to work entirely locally with nothing but what they had brought to the Web Summit it’s not hard to see why one investor called the company’s app “the best at the summit.”

Stephen explains how this clever coding along with Big Motive’s eight years of experience in the media sector had brought the company, and Motovision, to the attention of the smart TV industry.

Timing is also on Big Motive’s side.  With both Ireland the UK about to completely switch from analogue TV to digital with their Saorview and Freeview products, more and more digital TVs are expected to appear in living rooms throughout the British Isles, as well as further afield.

And further afield is where Stephen has his sights set; “We’re already preparing for South by South West in March, that’s when Motovision will be officially launched.”