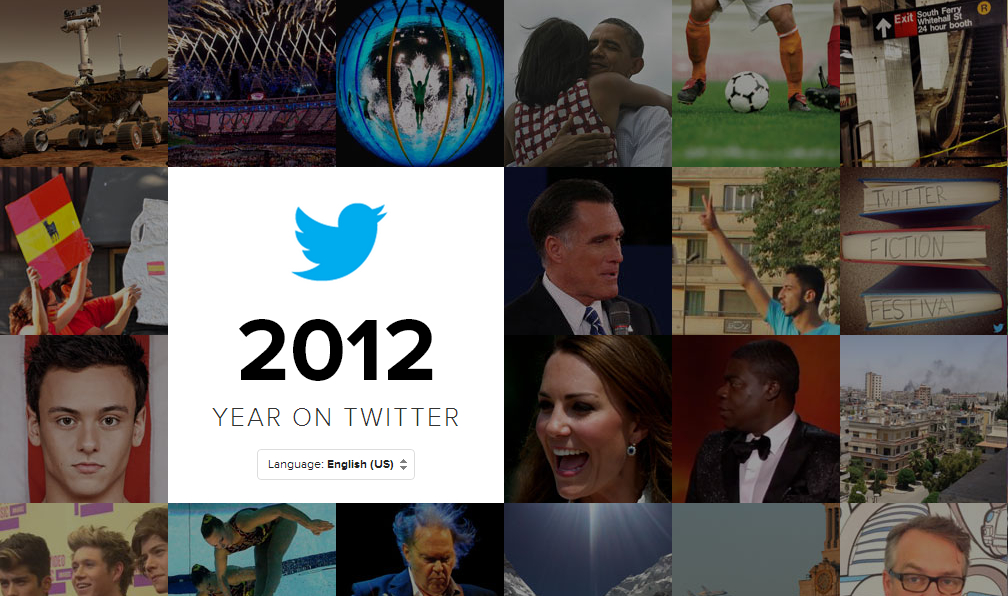 Twitter has released its review of 2012 in tweets, and has created a system to allow users to create their own custom Year in Review infographics.

2012 has been an eventful year for Twitter: with the Olympics and the US Presidential Election the social network was responsible for publishing millions of tweets this year, with nearly no significant downtime.  From Barack Obama’s record breaking tweet to serving over 324,000 tweets per minute on Election Day perhaps the most noticeable achievement on Twitter this year is that it has remained stable and accessible to all, in spite of growing demands on its services.

Like Facebook, which has created an app to allow users to create their own Review of the Year based on their most popular status updates, Twitter has partnered with Vizify to allow users to create their own interactive infographics.  These show the most used words, phrases, and Tweets sent during the past 12 months on users’ accounts (although it’s limited to 3,200 tweet, so if you updated more than that in 2012 than you’ll only see these).

The infographic shows how often you mentioned certain terms and which of your tweets were the most popular.

Tweets of the year
Unlike Facebook and Google, Twitter’s year in review contains a wealth of data, showing not just the most common terms mentioned during the year but also showing data about each of the terms.  Twitter has divided its tops tweets of the year into five sections: Golden Tweets, Pulse of the planet, Only on Twitter, Trends, New voices

Golden Tweets
This is Twitter’s review of the most retweeted tweets of the year, along with what it calls some notable mentions.

Barack Obama’s record breaking Tweet, showing himself and the First Lady embracing soon after Obama was declared the winner of the 2012 election takes the top spot on this list.  According to Twitter’s data this was the most retweeted message ever on the social network, with retweets coming from people in over 200 countries.

Justin Bieber’s message to Avalanna Routh, a six year old girl and Bieber fan who died from a rare form of brain cancer is placed second on the list.

RIP Avalanna. i love you

The official account of the UK’s Olympic team got onto the Golden Tweet list with their congratulatory message to the team become one of the site’s most popular messages of 2012.

29 gold, 17 silver, 19 bronze – We finished 3rd in medal table after most successful Olympics for 104 years #OurGreatestTeam RT your support

The pulse of the planet
Twitter describes its Pulse of the Planet selection of tweets as “Some of the biggest conversations of the year that generated large numbers of Tweets and Retweets.”  This is basically Twitter’s collection of notable tweets about major news events this year.

Covering sports, music, the US Presidential election, Hurricane Sandy, and SOPA/PIPA these are the news events that got Twitter users talking.  Many of these match Google’s list of the most searched for terms of the year, suggesting that we weren’t just looking for information about these events but we were actively debating them.

January’s SOPA/PIPA bills, which would have given US lawmakers more control over internet content was, according to Twitter, one of the most debated topics this year;

The surprise death of Whitney Houston this year was one of the most discussed topics on Facebook and one of the most searched for terms on Google, so it is no surprise that we were tweeting messages to the lost singer.  Whitney’s name was mentioned 73,662 a minute soon after the news of her death broke online.

In five days Twitter users published over 20 million tweets about Hurricane Sandy but according to the site we weren’t just discussing the event, we were calling on each other to help.  Twitter reports that soon after the Hurricane passed mentions of the word “donate” spiked and mentions of the term “donate blood” rose to their highest levels this year.

Another event happening around the same time was the US Presidential Election.  The battle between Barack Obama and Mitt Romney produced 10 million tweets during the first presidential debate, an impressive figure.  But over three times that amount were published during Election Day. In total for the 24 hours during Election Day Twitter managed over 31 million tweets mentioning the election alone, peaking at 327,452 tweets per minute.

Not quite as high but no less impressive, Twitter published over 80,000 tweets per minute when Usain Bolt (@UsainBolt) became the fastest man on Earth during the 2012 London Olympics.

Pic: Usain Bolt, the fastest man in the world, kisses his gold medal after taking to the podium tonight #London2012 pic.twitter.com/QNHd9WTx

Only on Twitter
We’re used to Twitter breaking news stories and giving us access to behind the scene events that we wouldn’t normally see and this year Twitter has done both in amazing ways.  From Tweeting robots on Mars, to tweeting cameras in the Olympics, and the Father of the Web dedicating his creation to the world, Twitter has had an amazing 12 months.

One of Twitter’s favourite tweets of the year (and ours as well) was perhaps the most unexpected.  When Sir Tim Berners-Lee, the man who invented the web, was honoured at the opening ceremony of the London 2012 Olympics we didn’t expect that he would live tweet while the eyes of the world were on him.  But he did, and this was his message;

From tweeting with the world watching to tweeting from where no man has been before, James Cameron sent this message from the bottom of the ocean’s in March 2012

Another special journey happened six months later in September when NASA’s Shuttle Endeavour was brought to its final home in Texas.  The craft was flown across the States, creating some amazing photo opportunities along the way.

NASA’s current generation of spacecraft, the International Space Station sent some amazing tweets this year, including this one of the Hurricane Sandy as it hit New York.

Hope everyone is doing ok with the storm. Saw #Sandy on our flight path yesterday. From our vantage point #ISS  http://t.co/KFxXl90c

Twitter Trends
Twitter’s list of the most mentioned topics on the site closely match those of Facebook, suggesting we use both sites to talk about similar events.

Twitter and Facebook users like most the same movies, just to different degrees.  While The Hunger Games was the most discussed film on Facebook, it comes second on Twitter’s list, after Think like a Man.  The Avengers, one of the most successful films of the year, only manages to achieve third place.  The Dark Knight Rises comes in sixth place, similar to its position on Facebook.

A notable absence from the list if the latest James Bond film; Skyfall doesn’t make the top 10 films of the year mentioned on Twitter, in spite of doing well on Facebook.

Where Twitter and Facebook separate is in the type of political topics discussed on the sites.  The Republican Party dominated the list with more mentions than their Democratic rivals.  The GOP occupy seven of the top ten positions on the list, the Democrats’ highest mention is at position 6, with the hashtag #dnc2012.  Barack Obama manages to come in at tenth position while Romney comes in at fourth and fifth positions.

New voices
Finally, Twitter gives us its list of notable additions to the Twittersphere this year.  From the Pope to Betty White, several famous faces have joined the social network in 2012.

As for TV @SteveCarell started tweeting this year, alongside comedy legend @BettyMWhite. Star Trek and American Dad actor @SirPatStew put out some tweets, as did fellow Brit and Star Wars actor @mcgregor_ewan.