HomeSocial MediaFacebook’s Year in Review – Did you mention these topics on Facebook in 2012?
Social Media 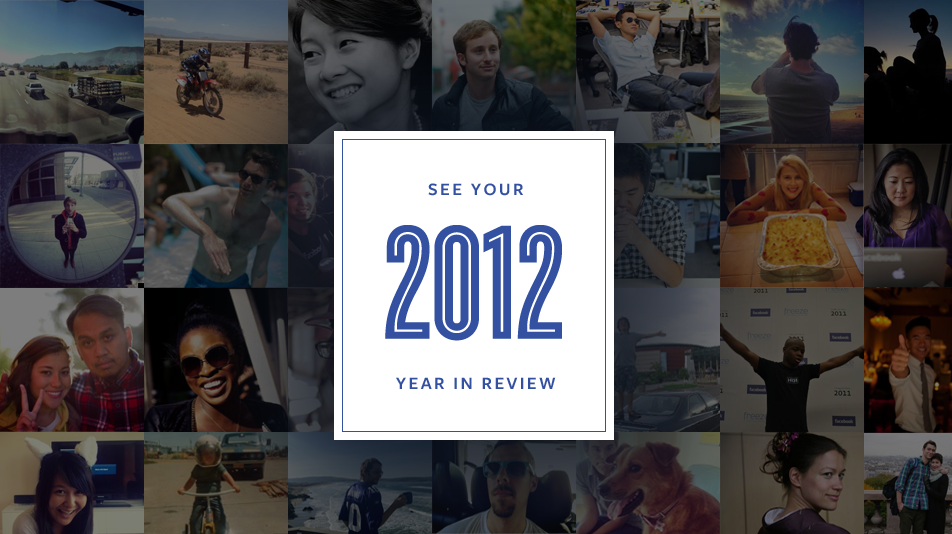 Facebook is inviting users to create a unique review of their past year on the social network, while at the same time revealing the most mentioned topics on the world’s largest social network.

Your year in review

Each user of Facebook now has the option to create their own personal review of the year, thanks to an application which went live on the site today.  By going to the Year in Review subsite, which should be visible on your timeline, Facebook will select 20 of the most important posts from your past year on the site and redisplay them in one custom timeline.  You can then share this with your friends.

The Year in Review application will also show key statistics, such as how many friends you added and how many pages you liked, and photos from the previous 12 months.  The system seems to be ranking posts according to the number of likes and comments each has had this year.

2012 was the year that Facebook surpassed one billion users, the company reached IPO  and continued to help fuel protests for democracy around the world. And as Google has already done with its 2012 Search Zeitgeist this year the company has revealed the most mentioned and discussed topics by its millions of users on the site.

As with Google, Facebook has broken its list of the most mentioned topics into 11 categories; Memes, Events, Most Listened to Songs, Movies, Check-Ins, Public Figures, Most Read Books, Technology, Politics, Television, Sports.  It has also created country-specific lists, although its list isn’t as large as Google’s.

Here’s what US users on the site mentioned this year.

The meme category on Facebook is a mix of textspeak and some viral news topics.  THB, YOLO, and SMH, were some of the most used phrases on the social site in the past year.  YOLO probably stands out as the phrase of 2012 as it also makes an appearance on some of Google’s Year end Review lists too.  The controversial anti-Joseph Kony video created by Invisible Children, which went viral early in the year, is the highest placed event-meme on Facebook’s list.  It even manages to beat Google favourite Gangnam Style, which only comes in at fifth place.

The US election gets a mention with Big Bird, which became a meme after Mitt Romney said he was a fan but wanted to cut public service broadcasting funding.

Facebook shares many of its most mentioned news stories of the year with Google’s list of search terms.  As you would expect the US Presidential election was the most mentioned topic on the site but interestingly the London Olympics only came fifth.  It was out mentioned by the Superbowl, superstorm Sandy and the death of Whitney Houston.  Politics gets another mention, in tenth place, with Obama’s endorsement of gay marriage.

Image creation and sharing, tablets and smartphones, and Facebook itself dominate the most mentioned technology topics on the site. Facebook’s purchase of Instagram for one billion dollars helped make it the most mentioned technology related subject on the social site.  It was closely followed by that other image sharing site du jour, Pinterest. Draw Something comes in at fourth place to complete the image-related theme this year.  Facebook’s timeline, which was rolled out to all users this year and its own news feed featured heavily on the site.

The controversial US media law, which would have given US law makers the ability to take down websites, SOPA, comes in at 7th position.  Apple’s iPhone 5 and Amazon’s Kindle Fire take 5th and 6 positions as the most discussed tech products this year.  Apple gets another mention with its Siri service in at number 9.

It dominated Google’s list of the most mentioned movies of 2012 and it is the same on Facebook.  The Hunger Games was the most mentioned film of the year on Facebook, followed by The Avengers and Magic Mike.  Tweenage favourite, Twilight, only managed 5th place but this is still higher than the Dark Knight Rises, Skyfall, and Prometheus.

The Hunger Games also leads in the books category.  The series’ three books occupy the top three places on the list.  There’s no surprise that Fifty Shades of Grey make the list too.  But it’s not just modern literature that was read or discussed on Facebook this year; Harper Lee’s To Kill a Mockingbird and F. Scott Fitzgerald’s The Great Gatsby were also popular.  Modern classic, Harry Potter and the Sorcerer’s Stone was more popular than some recent publications.

The US election candidates, Barack Obama and Mitt Romney, along with Romney’s running mate Paul Ryan, were the most discussed people in the public eye in 2012.  Followed by UK/Irish boyband One Direction.  But it was sports figures which were most discussed on Facebook this year; they take up half of the position on the top ten list.

When it comes to politics, it was the candidates more than the issues which were discussed on Facebook.  Obama, Romney, Ryan, Santorum take most of the places while gay marriage and obamacare are the only two policy issues mentioned on the site.

You can see the full list of topics and specific country results on Facebook’s Year in Review site and you can see Google’s list of the most popular searches of 2012 here.  You can make your own Facebook Year in Review list here.