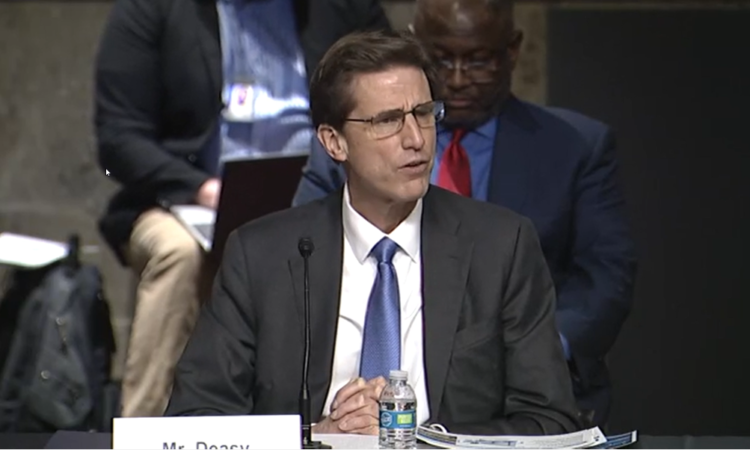 Pentagon officials testify that the FCC’s recent approval of the Ligado 5G plan will cause harmful interference to GPS during a hearing today before the Senate Armed Services Committee.

However, the Department of Defense (DoD) unanimously opposed the FCC decision and told lawmakers that the commission needs to reverse its decision because of the potential harm to Global Positioning Systems (GPS).

DoD officials testified today that GPS signals that are beamed from satellites 12,000 miles above Earth are so faint that they would be drowned-out by the excessive noise caused by Ligado’s network.

“The risk to GPS far outweighs the benefits of this FCC decision, and the FCC needs to reverse their decision” — Dana Deasy

The worry is that this interference would render all current GPS useless, which would impact nearly every person on planet.

DoD Chief Information Officer (CIO) Dana Deasy testified that the risks to GPS far outweigh the benefits and that the FCC needs to reverse its decision.

“The American public and military rely on GPS to support a wide range of critical applications and missions, from protecting our national security to our economic prosperity,” he said.

“GPS must remain a reliable service and always be available when you need it most.”

Deasy added, “It is clear to the DoD that the risk to GPS far outweighs the benefits of this FCC decision, and the FCC needs to reverse their decision.”

The Pentagon’s CIO also took a crack at the legitimacy of Ligado, stating that they don’t even provide a 5G solution.

“Ligado and 5G simply don’t go together. They portray their solution to be 5G. This is not how the US will lead in 5G. They only target a small subset of the 5G specifications,” said Deasy.

Dr. Michael Griffin, Under Secretary Of Defense For Research And Engineering, testified Ligado has about 3.5% of the sub-6 GHz spectrum in use today and that Ligado’s presence or absence would “make no significant difference in US 5G.”

Both Deasy and Dr. Griffin explained the importance of GPS, with Dr. Griffin adding how any harmful interference coming from Ligado’s network could bring it all crumbling down.

“What we’re trying to do with GPS is to hear the sound of leaves rustling through the noise of 100 jets taking off all at once” — Dr. Michael Griffin

“Everytime you use an ATM, you are using the GPS timing signal that is provided in order to conduct an encrypted transaction,” Dr. Griffin testified.

“Civil aircraft, military aircraft, commercial shipping, our deployed troops, credit card swiping machines — all of these things are in one way or another dependent upon GPS,” he added.

All of these GPS-dependent applications and many more would be rendered inoperable if the signals coming from space could not be picked up and processed by transmitters on Earth due to the excessive noise in the spectrum.

Dr. Griffin explained, “It’s very difficult to give you an accurate, technical comparison of just how loud the Ligado signal is in comparison to GPS.

“The quietest possible sound that can be heard might be represented by rustling leaves, which are quoted at 0-10 dB in the literature.

“On the other hand, a jet taking off will create a sound 140-150 dB. If you’re standing right next to it, it will blow out your ear drums.

“So, if zero decibels is barely audible and 140-150 decibels is a jet takeoff, then what we’re trying to do with GPS is to hear the sound of leaves rustling through the noise of 100 jets taking off all at once.”

General John W. Raymond, USSF Chief Of Space Operations of the United States Space Force and Commander of the US Space Command, testified that GPS would be “irrelevant” if the signals couldn’t be detected.

“This critical capability [GPS] is irrelevant if the signals coming off the satellite can’t be processed by the receiver on the ground,” he said.

“These signals, after traveling 12,000 miles from space to reach Earth, arrive very weak — less than a millionth of a billionth of a watt. It’s hard to get your head around that small of a number.

“For receivers to be able to pick up such faint signals, these signals have to operate in a noise-pristine environment — in that part of the spectrum.”

General Raymond added, that Ligado’s “ground emitters will interrupt, reduce the accuracy of or jam the GPS signal.”

“We must preserve this spectrum for space-to-ground signals. It’s the global standard and it puts our space capabilities, which are the gold standard, at risk,” the general said.