HomeBig TechIf Twitter really wants to give ‘links to a broader conversation’ on disputed posts, why not show both sides?
Big TechSocial Media

Twitter decided to censor posts that ‘could undermine faith’ in election process before a single vote was cast on election day: perspective 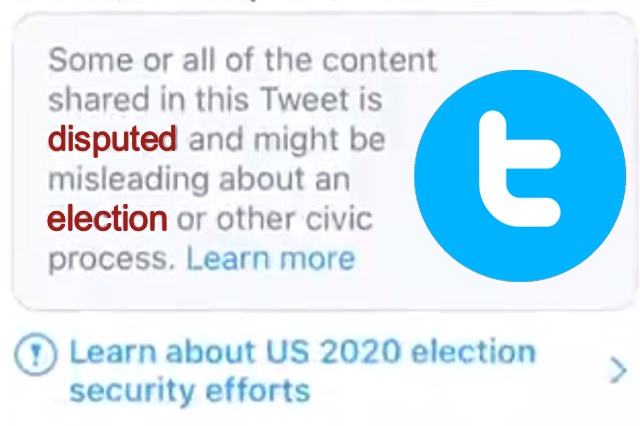 If the idea behind flagging posts as “disputed” and directing users to alternative links on Twitter is really about providing more context to an issue, why then aren’t the opposing claims also listed as “disputed?”

For example, high-profile social media posts that question the integrity of the 2020 US presidential election are flagged as “disputed,” and users are provided with links that dispute the claim.

But when posts claim that this year’s election was the most secure ever, they are not flagged as “disputed,” despite the fact that election integrity is being disputed in both public discourse and in legal proceedings.

“We’re simply linking to a broader conversation, so that people have more information” — Jack Dorsey

“We’re simply linking to a broader conversation, so that people have more information.”

If what Dorsey said were true, then Tweets from both sides of the argument would equally be flagged as “disputed.”

When something is disputed, it stands to reason that the dispute must have more than one side. Otherwise, it wouldn’t be a dispute now, would it?

Therefore, it makes no logical sense for big tech companies to declare a phrase like — “the election is rigged” — to be flagged as disputed, but not apply the same reasoning to the counterargument — “the election is not rigged” — unless there were other motivating factors involved.

However, the one-way censorship makes perfect sense when you realize that Twitter had already declared that the election process itself was infallible and would censor anyone who would “undermine public confidence in an election” as a matter of policy before the election.

We will label or remove false or misleading information intended to undermine public confidence in an election or other civic process. This includes but is not limited to:

Twitter’s Civic Integrity policy is founded on the principle of not undermining “faith in the process,” and as such, it will label any evidence to the contrary as being disputed.

“Linking to a broader conversation” actually means ignoring the broader conservation when held up to a mirror in Twitter’s case.

But the truth behind the election rigging controversy is irrelevant to the bigger picture — that’s just one example to highlight a point — which is that big tech controls the flow of information, and it will steer its users in any direction that it wants for its own purposes.

If it were really about giving context to a broader conversation, then why don’t we see claims that the earth is round being disputed by flat earth believers?

Is the topic not dangerous enough, or is it because it was allowed to be held up to public scrutiny, and people have already made up their own minds on what to believe, so the fact checkers got a free pass on this one?

By the same token, if the claim that the election was rigged were said to be as credible as the idea that the earth is flat, why wouldn’t everyone be allowed to see the evidence and arrive at their own conclusions by themselves?

Wouldn’t sunlight be the best disinfectant?

With the immense data they collect and the information they selectively disseminate, big tech companies have become more powerful than governments.

You can’t have an educated public engaged in civil discourse when disputed issues are unevenly policed by the gatekeepers of today’s digital public forums.

And that’s where big tech’s power lies — far beyond the squabbling of right versus left.

It’s a battle between technocrats and the citizens of free nations for access to information.

Big tech may appear to currently favor one side of the political spectrum over another now, but it has no loyalty, obligation, or responsibility to any political ideology, and it can choose to play both sides whenever it pleases.

As long as the big tech companies are given unchecked powers, they will be loyal to only those who are in the club

Liberals can be outraged all they want at big tech companies for not taking down enough harmful “misinformation,” and conservatives can cry and moan every time they feel their values are being censored, but big tech companies will continue to operate on a whole other level, far away from the partisan bickering.

Google, Facebook, and Twitter profit from the polarization they amplify. They provide fuel to political uprisings, and they possess the ability to influence elections.

As long as the big tech companies are given unchecked powers, they will be loyal to only those who are in the club, which consists of their industry peers, un-elected bureaucrats who wish to overthrow the world order, and members of the intelligence community .

By only showing context to disputed claims that flows in one direction, big tech has chosen its side, for the time being.

The major players have already partnered with the World Economic Forum, and its allies like the World Health Organization, and many have openly embraced the technocratic “great reset” of society and the world economy.

When Facebook, Twitter, and Google align their content moderation policies with the recommendations of un-elected bureaucrats fully indoctrinated with an ideology that only works with a global crisis to exploit, it won’t matter if you’re a liberal, a conservative, or a moderate.

It will be too late.

There will be no room for your opinion after the proposed “great reset” turns your body into a tracking device disguised as your digital identity and you are living under the authority of the envisioned “citizen-centered welfare state.”

In the left versus right charade is being played out on big tech platforms, you may be on the side that appears to be winning now, or not.

But sooner or later that censorship pendulum is going to swing in the other direction with an equal and opposing vengeance to the one that set it in motion in the first place, and there’s no guarantee that whatever liberties are lost along the way will ever be found again.