A ‘Sociable’ feast at the GEC Medellin: tales of nervous encounters, death by selfie & police prostitution 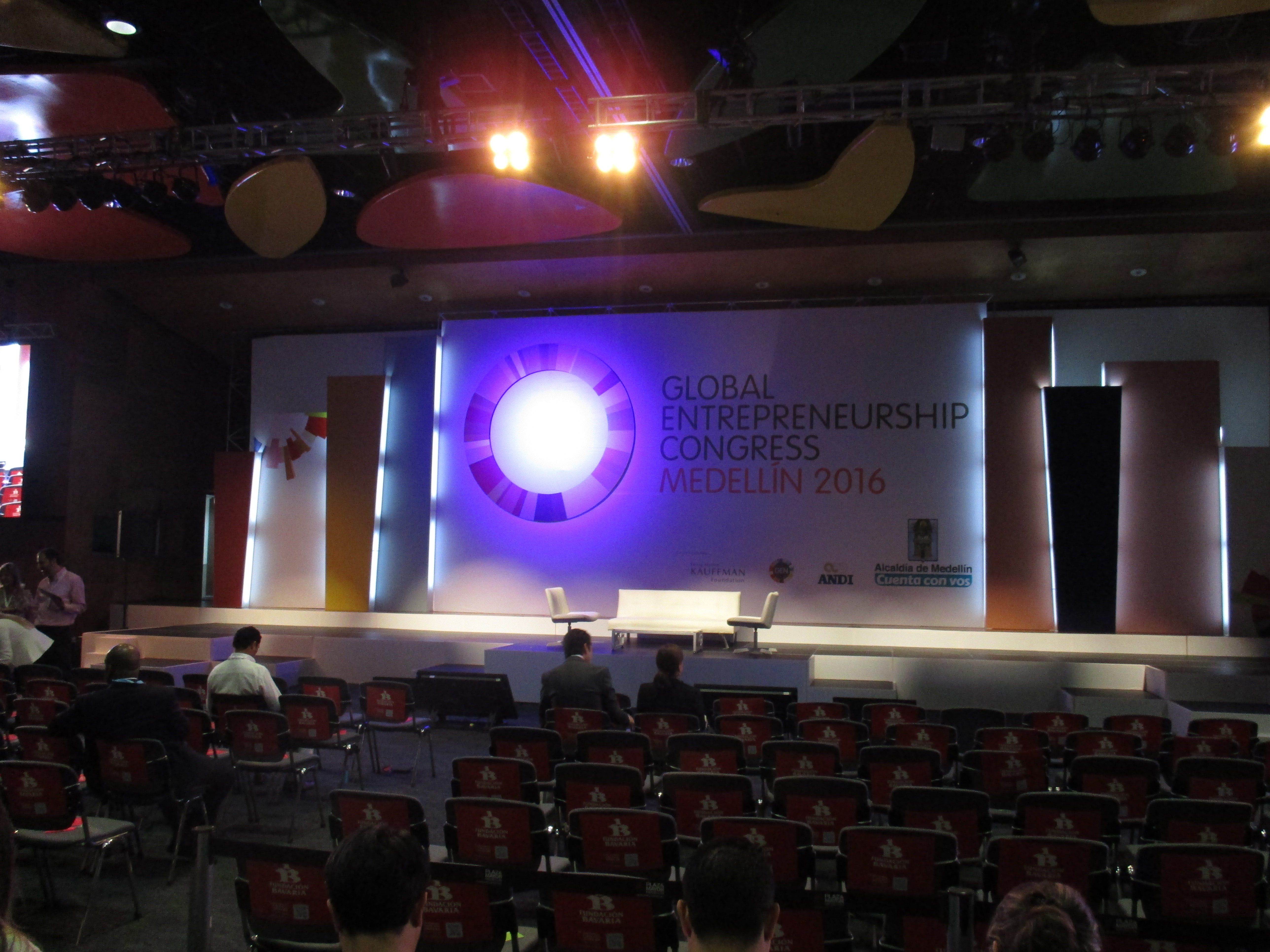 Welcome to the GEC!

Waiting for the opening ceremonies of the Global Entrepreneurship Congress (GEC) Medellin 2016 to commence, dulling lounge renditions of 80s classics lull the attendees into a mood of calm intensity. If this is any indication of things to come, I have a feeling this is going to be a long day.

Sitting in the grand chamber, my first contact, Sergio from Bogota, has been eyeballing me ever since I sat down.

“Hola,” he says with a type of earnest that only working 20 years in communications can extol.

“Hi,” I say, with a type of reluctance that comes from dealing with one too many used-car salesmen.

He scoots closer. Expecting the worst, I am relieved to find that he is very amicable, and when I ask him where he is from, he says, “I am from nowhere.”

“That is my company that is based in England.” I write down the name, but I don’t have the WiFi password to look it up on my Windows Surface. Why don’t I have the WiFi password even now as I write this outside the Gran Salon where coffee, coffee, coffee; networking, dry ice spectacles, and a barrage of languages representing some 160 nations is a linguistic free-for-all. But I digress.

The cheesy lounge music must be having a stupefying effect upon the masses congregated in La Plaza Mayor de Medellin.

“The show will begin in 5 minutes”

The MC has really gone far to promote this one, and it more accurately describes this event – a show. Not a conference, not a presentation, not a forum, but a show.

At least they’ve killed the music by now, but as I look behind me, I see ripples of selfie-takers on every flat screen device imaginable at this gathering of entrepreneurs.

I’ve read about the recent influx of death by selfies in the news lately, and I’m not too sure whether this venue would by any standards qualify as a “safe environment.” Sure there are law enforcement everywhere, with dogs, but I don’t put too much confidence in the Colombian National Police.

Did you know that Colombia’s national police chief just resigned over a gay prostitution ring involving high-profile members of the police, military, and government? It’s true. I’m not making this up. You can follow the action on Colombia Reports.

The opening talks were as expected – praise for Medellin, a city that was once the most violent in the entire world about 20 years ago, and how it is progressing, but has a long way to go. They get it. We get it. Moving on.

Read More: Medellin’s many attractions for the Global Entrepreneurship Congress 2016

Peaking my interest from one of the presenters was a talk given by Medellin’s Asociación Nacional de Empresarios (ANDI) representative Bruce Mac Master. At a “show” highlighting entrepreneurial innovations, he compared Christopher Columbus and Queen Isabella of Spain’s conquest in the New World as the first visionaries in Venture Capital. I’m not so sure I agree with either the historical accuracy, nor the methods in which this venture capital was achieved, but at least it did make me do a double-take.

During the quick breaks in between speakers, more people sitting around me are curious as to why I’m taking notes, shooting photos, holding up a digital tape recorder, and loading my Belgian, sand-blasted pipe with English and Syrian tobaccos.

“I’m a journalist,” I try to explain in Spanish. They are eager to learn more. I try to convey in Spanglish what The Sociable is all about and why we are here.

“We are news site that keeps an eye on the social side of tech, and how that technology impacts companies, governments, and everyday people.”

They seem interested. One says he’s going to follow us! But then as he goes to his phone, he realizes that he doesn’t have the WiFi password either as he randomly taps a few icons in order to appease me with more nervous laughter.

That’s it! It’s lunchtime, and I’ve got to get away for now. Hopefully to a place with WiFi where I can share this with the lot of you.

The actual talks haven’t even commenced, but already it’s gearing up to be a Sociable feast. Stay tuned for more on the speakers of the event.