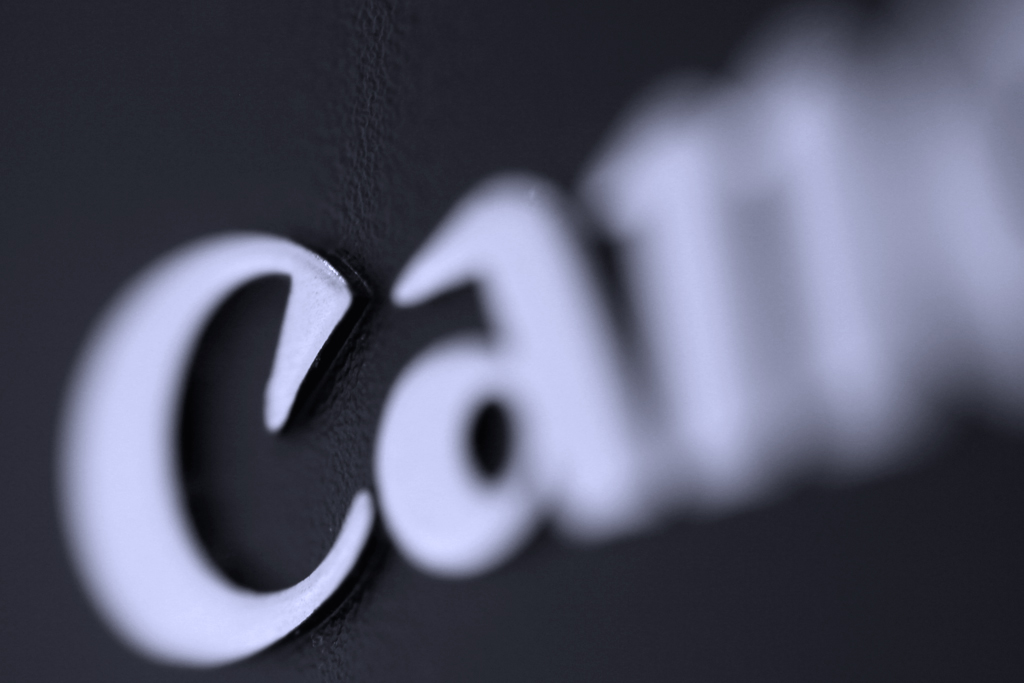 Before you judge, let me explain.

A few years back I digitized by family’s entire photographic history – just under 10,000 photos, slides, and negatives covering 92 years. Most of these were black and white and most were in a bad state. Dust, poor storage, and decay had damaged them all in some way.

This, of course, won’t affect digital photos. Provided you don’t re-save them too often the quality of the original photograph will remain undamaged by the passage of time. Sure, cameras are better now – most modern smartphone boast sensors with between 5 and 8 megapixels but megapixels aren’t the greatest measure of a photograph’s quality. The size of the camera’s lens is a far better way of predicting the quality of a camera’s photographs (since a larger lens can take in more light).

In the past five years the size of smartphone lenses hasn’t changed much. The pinhole lenses, like battery lives, have remained consistent. So this means that the quality of smartphone camera’s photographs is also significantly dependent on the quality the camera’s firmware.

Add this all together and you see that modern photographs aren’t entirely superior to analogue photographs. These days you’re taking photographs with low quality lenses, with lower quality firmware (than compact cameras), which are then saved to various social networks at a lower quality. So, after all that, why would you add grain and other vintage degradation to your family snaps?

I have plenty of photos in the family archive that I wish were less faded, had fewer scratches, and had sharper a sharper focus.

But, I understand the need to be creative, to add personal touches to your images. You just have to remember that doing so comes at a cost. How will your children or grandchildren feel when they look at your photos, which have been altered into something less than what they are?

One of the few camera manufacturers to address these concerns is Canon. Last month we got to play with Canon’s PowerShot N, which the company says will combine the creativity of Instagram and the quality of a compact camera lens. 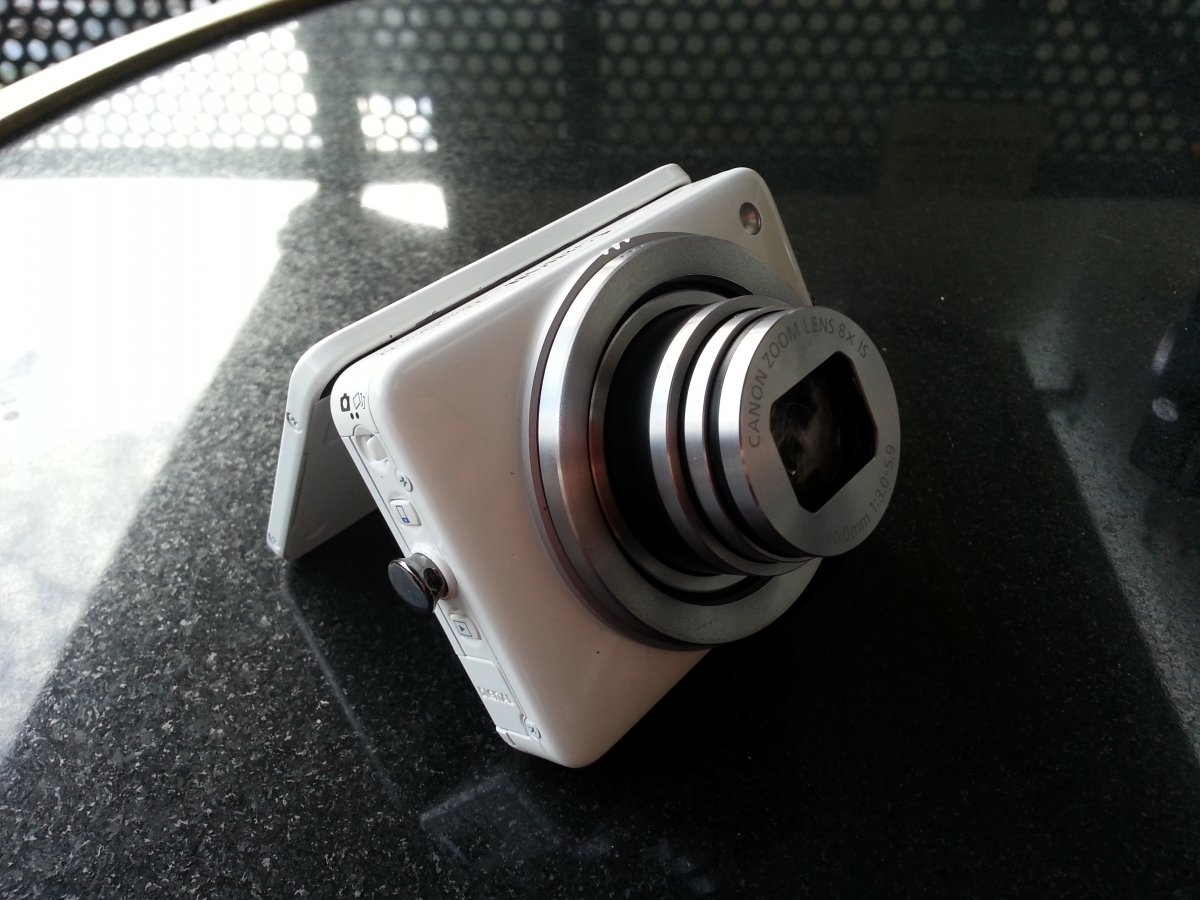 The PowerShot N takes six photographs for every one you take. It keeps your original image and then generates five other versions, which have been re-rendered in some form of Instagram-like filter.

Since we’re spending more our money on smartphones a greater number of manufacturers are attempting to compete. Nintendo’s Wii U is designed to be used as a second screen, while GPS makers are trying to innovate to compete against Google Maps’ mobile app (which is free and often as good as device-specific GPS systems).

And with the PowerShot N Canon is attempting to convince us that a compact camera is still a better buy than a smartphone camera. And from what we saw, it was.

First, the design of the camera is unique. At about half the length of a Galaxy SIII, this is certainly a compact camera. It’s so small that Canon has added two grips either side of the chassis to make it easier to hold. The camera is thicker than a smartphone, but this is mostly to accommodate the 8x zoom lens.

There are no physical buttons on the device, save for a switch that turns on and off the filter system, a Wifi connect button, and the standard picture-review button. 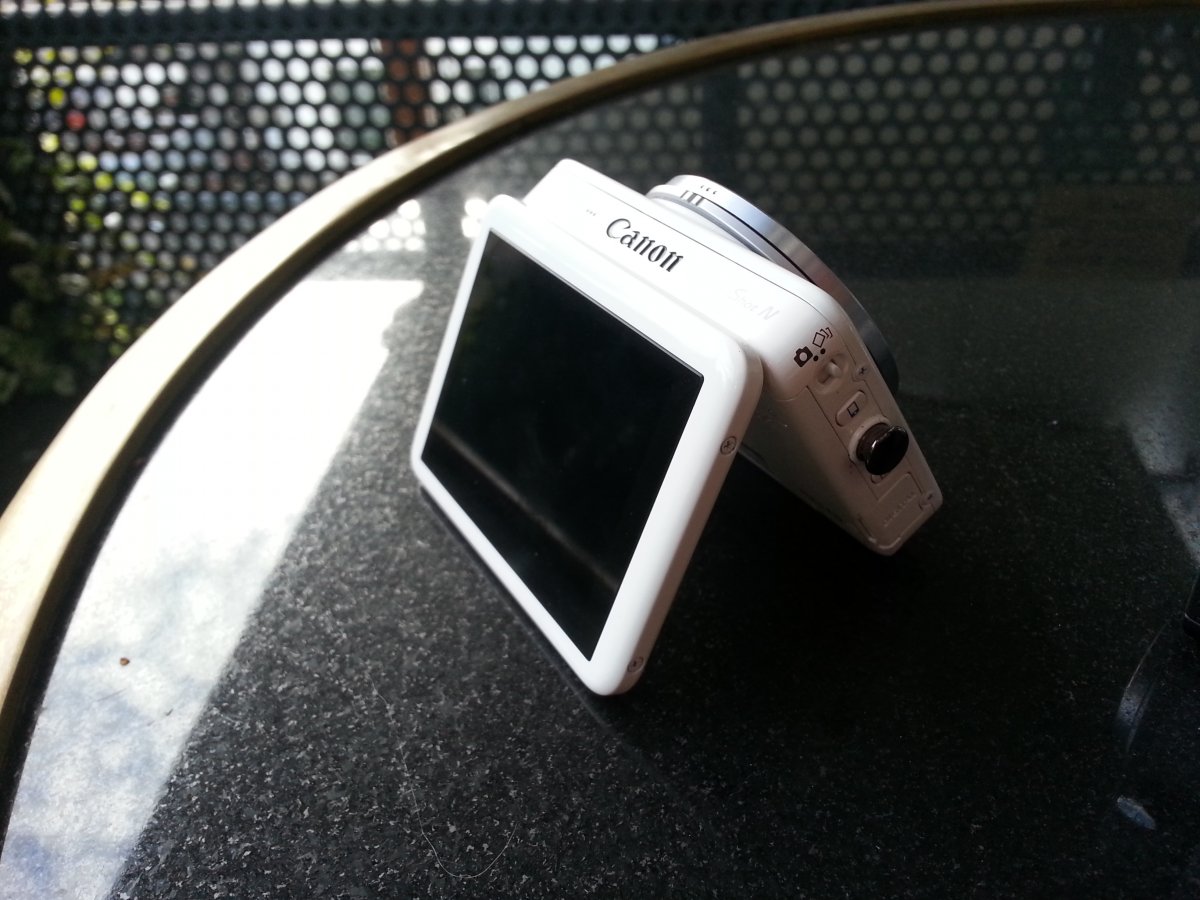 The UI is fast and the screen is responsive, although with such a small surface area operating the screen does require some getting used to. Since the camera is so small you take photographs by depressing the side of the lens ring, because of this you hold the camera like an SLR. Although you do risk moving the camera as you take each shot, which can be a hassle when starting out.

Other than that, the 1080p HD video is rich and Canon’s DIGIC 5 processor allows for high quality low-light shots; effectively showing smartphone cameras what a proper sensor and processor can do.

The quality of the shots is undoubtedly better than those even top end smartphones can produce, but the PowerShot N has its problems. At £269/€330/$299 we’d question whether the price is competitive enough. If the camera is to compete against smartphones and other, more usual-looking compacts, then we’d expect to see this coming in with a price tag at least 100 quid cheaper.

But if you take your photos seriously, and still want to filter than this is the camera that you need. And for the sake of your own family’s photo archive, the 300 quid price tag is reasonable.

The PowerShot N will be released at the end of April (2013).

Facebook isn’t building a phone, it’s taking over your phone