2012 was Google+’s first full year in operation, so what did it achieve?

We’ve already seen Twitter’s review of the year, as well as Google’s and Facebook’s but what about Google+? How has the young social network fared in 2012?

2012 was Google+’s first full year in operation, and it’s been an eventful one for the site.  Google has spent much of the year rolling out new features and heavily promoting those already available on the site. But in spite of its barrage of promotion, we are still unsure how many people actually use the site.

Speaking at LeWeb London, the Dublin Web Summit, and other events throughout the year Google representatives were heard to say that (and we’re paraphrasing here) “the latest figures we can reveal are…” and then went on to emphasise that these were “quite old.”

So who is actually using the site?  According to an infographic released by Google 500 million users have “upgraded” to Google+, meaning they have logged in and had a look around the site.  Of this half billion, Google says that it has 235 million active users posting on the site. 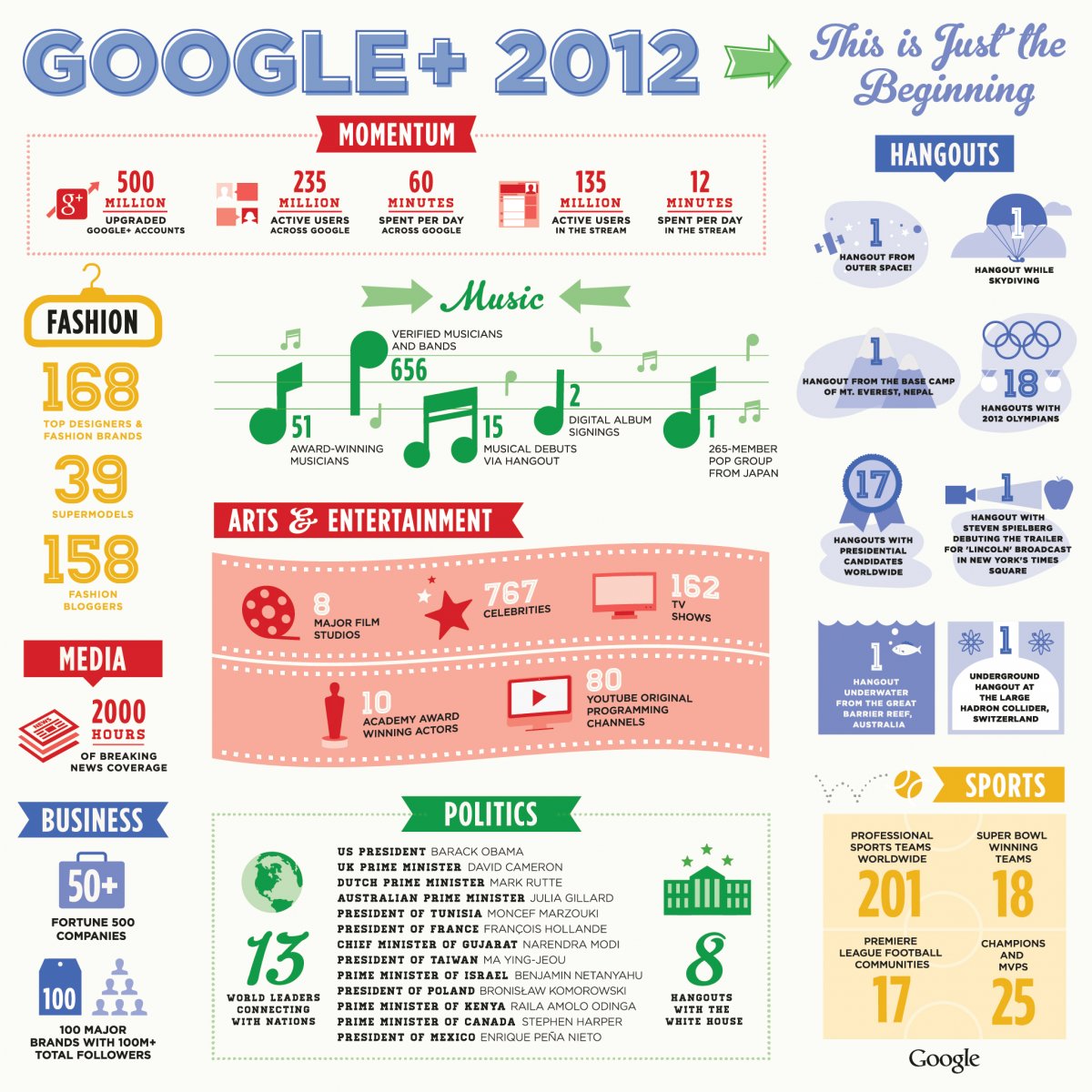 Solid numbers for such a young social network – it took Twitter six years to register its 500 millionth user and six and a half years to reach 200 million active users.  But Google+’s numbers are not that surprising, the growth of Google’s Android OS, which comes with the G+ app as default, has undoubtedly helped.

Perhaps Google+ biggest contribution to the media sphere this year has been its Hangouts feature.  2012 was a year of firsts for Google Hangouts; it recorded its first session from Space, dozens of presidential candidates across the world were interviewed and 18 international Olympic athletes logged in. The site even hosted one from the Large Hadron Collider in CERN.

Indeed, Google’s review the year on Google+ highlights Hangouts as the key feature of the site, as well as the celebrity and politics-focused aspects of the site.

Other than that Google’s figures for the site still pale in comparison of both Twitter and Facebook. Google reports that it has eight major film studios on board, and what seems like a surprisingly low number of celebrities, 767.  Its list of world leaders is also quite small.

Although, as we reported before, this is forgivable when you consider that the site is about 18 months old.  But perhaps the most notable absence from Google+ this year has been in the field of news.  Unlike Facebook and Twitter, Google+ has not yet had a moment when it broke, or has been used to break, a major news story.

Twitter had its Miracle on the Hudson in 2009 and the Iranian election protests of the same year and Facebook is, rightly or wrongly, seen as one of the factors that supported the start of the Arab Spring.  But in 2012 Google+ did not break a story on a large scale; sure it set the news agenda with some significant events (Felix Baumgartner’s space jump, for example) but was it the first to bring a large news story to the public?

So for all Google+ has achieved in the past year, it still has some milestones to achieve in 2013 – and of the major social networks it is still the one to watch.

Google+ has implemented feature after feature which has been appropriated by other sites, (automatic image uploading, advanced image editing) meaning that it is still the most innovative of the sites around and is best placed to make a significant impact on the news agenda in 2013.

Twitter seeking to expand UK and Ireland sales force in 2013